Season six of ChocoPro was full of high-energy matches and surprising moments alike. From showdowns in Ichigaya Chocolate Square to inadvertent property damage at other venues, Gatoh Move Pro Wrestling has ensured there’s never a dull moment. ChocoPro #108 marks the season six finale and it would seem that Emi Sakura and crew have pulled out major stops to ensure this is a show to remember. Here is a rundown of the action to expect on this special episode. 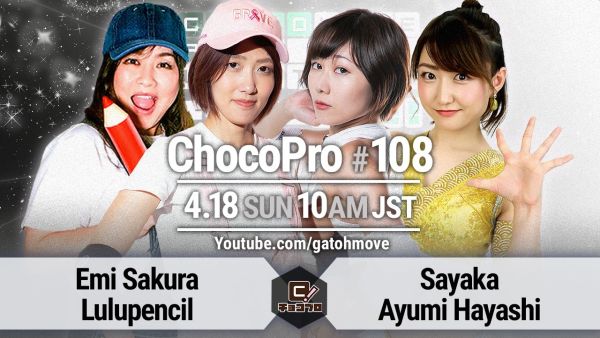 Opening ChocoPro #108 will be a tag team match featuring a returning star. Specifically, it will feature Ayumi Hayashi of Actwres girl’Z. Armed with the exclamation of “Wasshoi, Wasshoi,” Hayashi was last seen on episode #106, where she faced Mei Suruga in a losing effort, though she does hold a victory over Chie Koishikawa. On this episode, she will team with fourth-generation Gatoh Move star Sayaka to take on Lulu Pencil and Emi Sakura of Pencil Army. Lulu Pencil has been on a quest to win, as she knows she will have to eventually team with Pencil Army member Chris Brookes, who has sternly demanded they win the next time they team up. Can the Pencil Army commanding offer and “Emi Pencil” close out season six with a win? 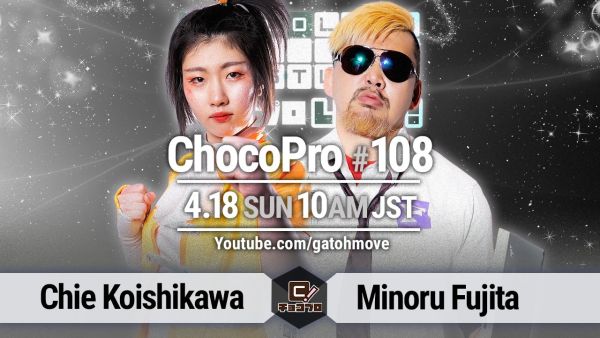 On the previous episode of ChocoPro, Minoru Fujita, or “Mino Pencil,” teamed with Lulu Pencil in a losing effort against Black Comaneci, the duo of Tokiko Kirihara and Antonio Honda. However, on the same episode, Chie Koishikawa’s fortunes were greater, as she picked up a win over AWG star Waka Tsukiyama. As a result, Koishikawa earned her first-ever singles victory in her career. Post-show, Koishikawa approached Fujita, making her intentions known: she wanted to become the new Super Asia Champion.

Emi Sakura made this upcoming match official, though it will be a non-title contest. However, if Koishikawa is able to pick up another singles victory here, she may be the next competitor to challenge Fujita for the Super Asia Title down the line. Koishikawa has made great strides as a wrestler, even developing a more sinister side that allows her to get into a different zone. However, with Fujita being the top titleholder in Gatoh Move, “Too Much Energy” herself will have to put forth the performance of a lifetime. 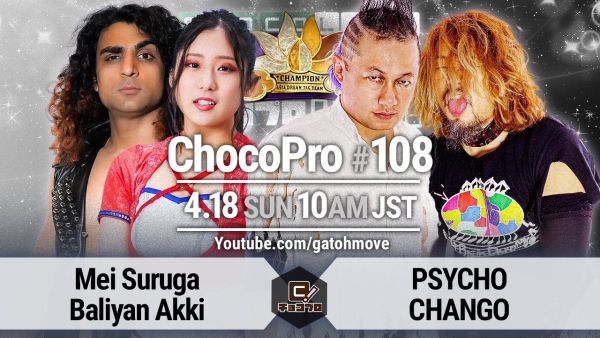 Since ChocoPro #100, the duo of PSYCHO and CHANGO has been wreaking havoc in Gatoh Move. On said episode, they picked up a big victory over Egg Tarts, the team of Chie Koishikawa and Hagane Shinnou. From there, they continued to be a force to be reckoned with, utilizing rule-bending tactics to their advantage. This would ultimately lead to them challenging Best Bros, the duo of Mei Suruga and Baliyan Akki, for the Asia Dream Tag Team Championship. Always looking for a challenge, Best Bros stepped up to the plate.

Heading into the ChocoPro season six finale, Akki, in particular, will be looking for retribution. The previous episode saw the high-flyer from India battle PSYCHO in a singles match. As Akki seemed to be on the cusp of victory, a distraction allowed CHANGO to spray a mysterious fluid in the Asia Dream Tag Team Titleholder’s face. PSYCHO took advantage, picking up the pinfall victory over the champion. In this main event, Best Bros will not only have to use the tandem offense that brought them to tag team gold but be wary of the nefarious tactics PSYCHO and CHANGO have become known for.