For the past two episodes, ChocoPro found itself greeted by a star from Actwres girl’Z in Ayumi Hayashi. However, the fun will continue, as Gatoh Move Pro Wrestling has offered an invitation to yet another AWG talent, one who will be looking to make her ChocoPro debut a successful one. This doesn’t even begin to touch on all the action set for ChocoPro #107. We are one episode away from the season six finale; without any further delay, let’s dive deep into the action confirmed for this penultimate episode. 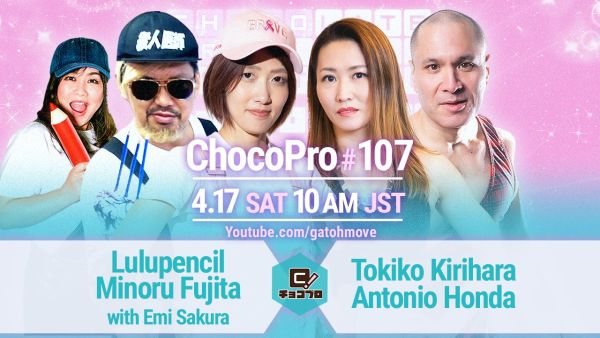 Two teams will clash in the opening contest of ChocoPro #107. On the previous episode, Lulu Pencil, the leader of Pencil Army, teamed with her newest recruit, Chris Brookes, also known as “Chris Pencil.” Though they put forth a valiant effort, Pencil Army racked up yet another loss. Brookes ultimately decided to stay with the group, but he was firm with Lulu Pencil, demanding that they win the next time they team up. On this upcoming episode, she will pair off with another member of the group, the Super Asia Champion, Minoru Fujita, or “Mino Pencil,” to take on a deceptive yet formidable group.

Though they may appear strange on the surface, Black Comaneci has been a force to be reckoned with on ChocoPro. The duo of Tokiko Kirihara and Antonio Honda recently defeated Rin Rin and TAMURA on episode #104, seemingly inching themselves that much closer to the Asia Dream Tag Team Championship. Kirihara and Honda’s combination of stiff strikes and wily antics can’t be denied. Will this unique offense allow them to thwart Pencil Army in this opening match? 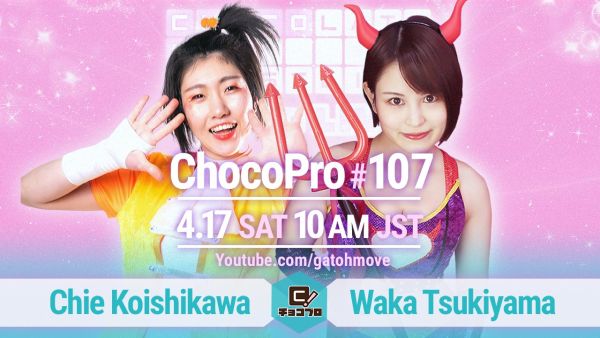 Chie Koishikawa is no stranger to wrestling AWG stars. Two episodes ago, on ChocoPro, she took on Ayumi Hayashi. To say that this was an energetic showdown would be an understatement. Koishikawa’s moniker of “Too Much Energy” is apt for the energetic Gatoh Move star, though Hayashi’s chant of “Wasshoi, Wasshoi” was empowering in its own right. In this battle, it was Koishikawa that fell short. Will she be able to steer the proverbial ship in the right direction as she battles a “devilishly” good foe?

Donning devil horns and wielding a pitchfork, Waka Tsukiyama made her professional wrestling debut this past September for AWG. Though she has yet to pick up a singles victory, Tsukiyama has continually sharpened her skills against the likes of Ami Miura and the current top star in AWG, SAKI. It’s also worth noting that Koishikawa and Tsukiyama teamed at an AWG event this past February, though in a losing effort. With Koishikawa looking to build momentum and her opponent focused on picking up a solo victory, this will be an encounter to watch. 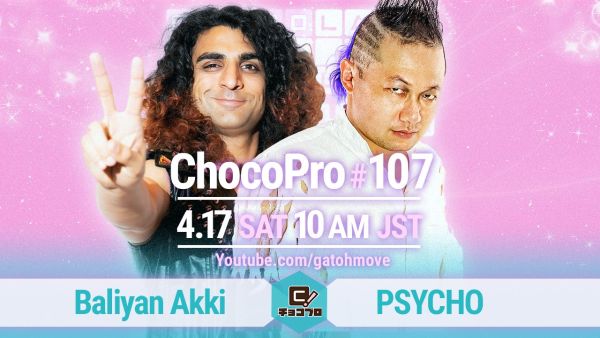 On the previous episode of ChocoPro, the duo of PSYCHO and CHANGO defeated Pencil Army’s Lulu Pencil and Chris Brookes in the main event. Post-match, the victors made their collective goal clear: they wanted the Asia Dream Tag Team Championship. PSYCHO and CHANGO weren’t shy about making their intentions known, either, though Best Bros were not shy about stepping up to the challenge. Emi Sakura made the main event for ChocoPro #108, the season finale, official. This show will close with PSYCHO and CHANGO challenging Akki and Mei Suruga for the Asia Dream Tag Team Championship in their fourth defense.

Before then, Akki will take on PSYCHO in singles action. Consistent ChocoPro viewers can attest to the gritty, oftentimes rule-bending, offense that PSYCHO brings to the table. In other words, one cannot fight cleanly against him and expect an easy victory. Not one to be short on confidence, Akki has relied on a mix of strikes and high-flying maneuvers to lead him to victory. After all, this approach helped make him a champion in Gatoh Move. With just one show to go before the season six finale, expect these two to give everything they have.