The final stop before the historic 500th episode of Ring of Honor TV, ROH TV #499 will feature two matches with one being contested under Pure Rules. Let’s see what ROH TV has in store for us this week.

A rivalry revisited from over a decade ago. Rocky Romero goes one-on-one with Delirious in a PURE Rules match this weekend on ROH TV!

Delirious and Rocky Romero are no strangers to each other or Ring of Honor. They both appeared for Ring of Honor for the first time at ROH Reborn: Stage One in April of 2004. Delirious lost his match to Matt Sydal while Romero and Ricky Reyes lost to The Briscoe Brothers in a tag team match. The two locked up in ROH a few times in 2007 in singles, tag, and four-corners survival matches. Delirious got the better of Romero in their one on one match at ROH Dominiation in June of 2007. The two last met in an ROH ring in a tag match where Romero, Davey Richards, and Roderick Strong defeated the team of Delirious, Erick Stevens, and Matt Cross.

Romero was a special guest commentator during the 19th Anniversary pay-per-view. Delirious approached the commentary desk and whispered something to Romero during the show. Whatever he whispered to Romero led to the match that we will see this week where they will settle their score from 2007.

Pure Rules matches have a 20-minute time limit. The participants are allowed three rope breaks, and closed fist strikes to the head are not allowed.  After a wrestler has used all three rope breaks, they can be pinned or submitted while holding or under the ropes. The first closed strike to the head gets a warning, with the second ending the match by disqualification. Competitors are encouraged to adhere to the Code of Honor, and any bout that goes past the time limit will go to a panel of judges to decide the winner. 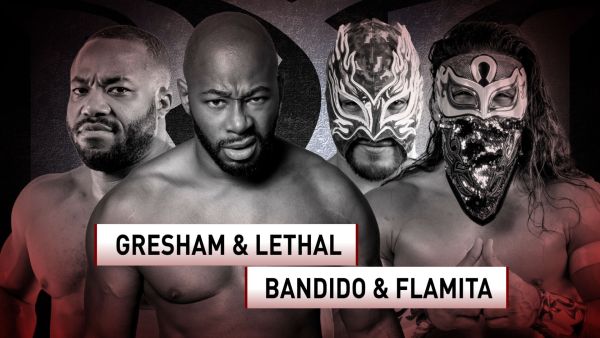 Jonathan Gresham and Jay Lethal vs. Bandido and Flamita

Jay Lethal and Jonathan Gresham will represent The Foundation against Bandido and Flamita of MexiSquad. The MexiSquad has not been a unified team since their matches at the 19th Anniversary event. After their loss to Shane Taylor Promotions on the 19th Anniversary pre-show, things became heated between Bandido and Flamita. Rey Horus suggested the three men squad settle their differences in the ring later that night. The triple threat match was made for the event which ended with Bandido pinning Flamita for the win. Tempers flared again after the match as Flamita refused to shake Bandido’s hand as he exited the ring. Can the two put their differences aside to defeat The Foundation?

The Foundation is coming into this match as a united front. As Lethal and Gresham prepare to face off next week during the ROH TV #500, they will have to rely on each other to get past the fast-moving and high-flying team of Bandido and Flamita. Can The Foundation move past their beatdown given by LFI and ROH’s newest faction at the end of 19th Anniversary to take down MexiSquad? Find out during ROH TV #499.

To see where you can watch ROH on TV or see the latest episode of ROH TV click here. For all things ROH, check out Honor Club.