On March 6, 2021, the course of Game Changer Wrestling (GCW) changed forever, when Joey Janela put creative control of his annual WrestleMania Week event, Joey Janela’s Spring Break, on the line against Rickey Shane Page and his GCW World Heavyweight Championship at GCW Take Kare. Sadly, for Joey Janela, it was RSP who ended up victorious. Now, this Friday, we will be having the first-ever Rickey Shane Page Spring Break instead. The event will air live on FITE.tv on Friday, April 9, at 8 PM EST. Page didn’t take long to start implementing some changes to the event’s annual traditions and booked a series of match-ups at his tyrannical whim – but there was one match he could not avoid. The long-awaited return of Nick Gage to GCW from injury and his title challenge against his arch-enemy Rickey Shane Page. 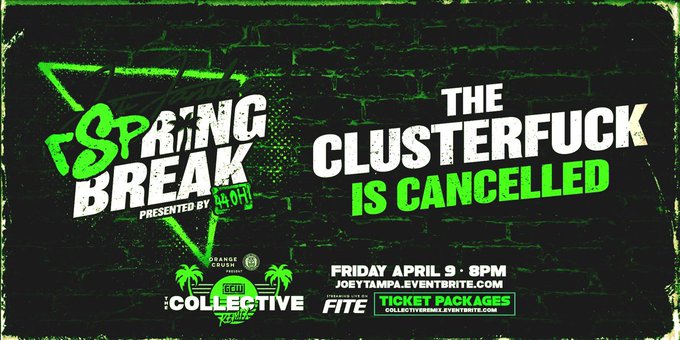 Since its inception in 2017, Joey Janela’s Spring Break has featured a huge battle royal – the Clusterf**k – featuring dozens of wrestlers who are in town for WrestleMania Week in a fun showcase of tons of emerging talent and guest stars. Rickey Shane Page cares about elevating no one but his gang, 44OH. Therefore, the annual Clusterf**k Battle Royal is being skipped this year on RSP’s decree.

Virgil Has Been Unbanned 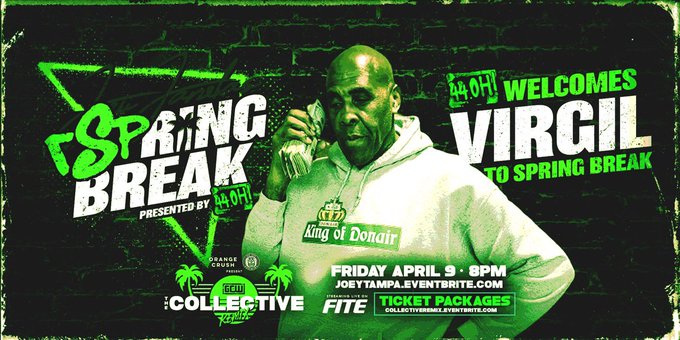 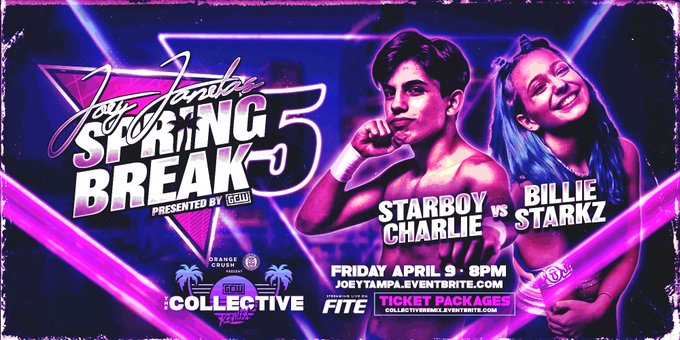 One of only two matches announced by Joey Janela before he lost control of the show, it’s hard to say whether Rickey Shane Page will still be honoring this match for the show or not. For the sake of the fans, let’s hope it remains on the Rickey Shane Page Spring Break card, as it’s a battle of the top two teenagers in the U.S. indies right now. Starboy is only 18 years old, but he’s already a nearly 10-year veteran – he started training when he was only 11, and as a 16-year old, he scored huge wins over Jake Atlas and West Coast legend B-Boy on his native West Coast circuit. Billie Starkz is an absolute workhorse who has not only put in the work but made a name for herself with the likes of Paradigm Pro Wrestling, St. Louis Anarchy, Black Label Pro, ACTION Wrestling, New Texas Pro, and GCW. Starkz is poised to be one of the breakout stars of 2021 and she’s still a teenager. 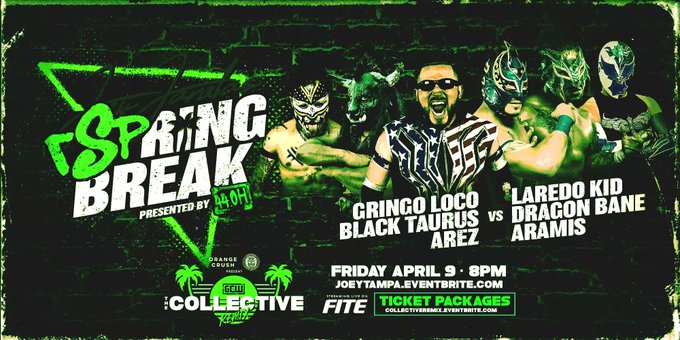 With several top luchadors from Mexico in town for WrestleMania Week, Rickey Shane Page decided to assemble a few into what is sure to be a fast-paced exhibition of some incredible athleticism, featuring multiple stars from top promotions throughout North America. Major League Wrestling (MLW)‘s Gringo Loco returns to GCW to lead a trios team that features IMPACT Wrestling and AAA star Black Taurus, alongside Arez, who has been working in the U.S. since 2016. On the other side, AAA World Cruiserweight Champion Laredo Kid, fresh off a huge showing on back-to-back episodes of AEW Dynamite, will lead a trios unit featuring two other hot young luchadors in Dragon Bane and Aramis. This will be an absolute clinic on modern lucha libre. 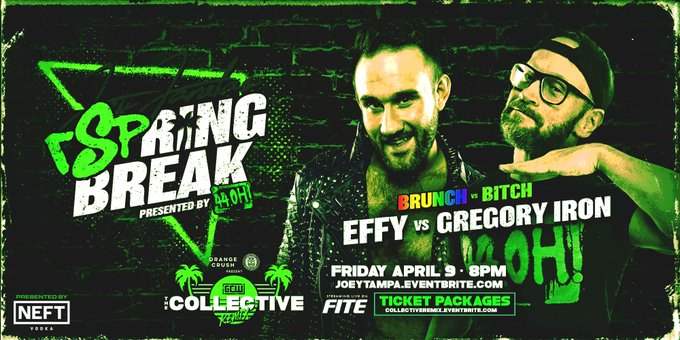 Inspired by his leader’s move of stealing Spring Break from Joey Janela, 44OH’s Gregory Irons challenged EFFY for creative control of the latter’s EFFY’s Big Gay Brunch event, which runs the following day on Saturday, April 10. EFFY has not only become one of the most important generals in the rise of LGBTQAI+ wrestling in the past couple of years, but he’s also one of the most entertaining performers in all of wrestling. He recently swerved 44OH at their own game, seemingly joining them at GCW Take Kare but turning on them again by night’s end, and now Irons is trying to suck up to Page to prove his worth out of 44OH’s greatest embarrassment. Expect Gregory Iron to be EFFY’s bitch on Saturday at 11 AM. 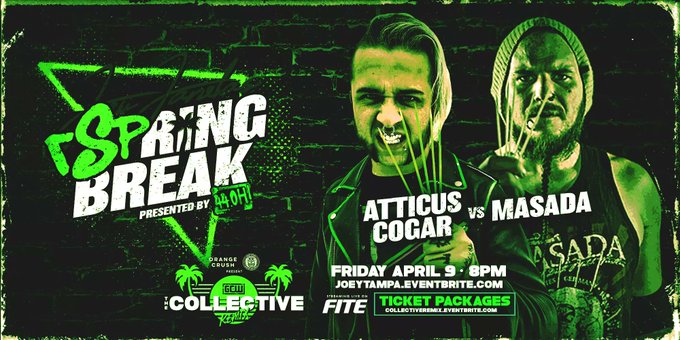 For months, Atticus Cogar has been working on upping his deathmatch game in the likes of GCW, ICW No Holds Barred, No Peace Underground, Hardcore Hustle Organization (H2O), and IWA Mid-South, but he’s struggled with one of deathmatch wrestling’s most brutal tropes – the skewers. He recently managed to properly execute them and his bravado may have written a check his buttocks won’t be able to cash. He challenged the man who made the skewer a staple of American deathmatch wrestling in the Texas killer MASADA. MASADA has been driving wooded skewers into the heads of monsters for decades, from Big Japan to CZW, from GCW to Mexico. It’s time for Cogar to put up or shut up but one thing’s for sure – this one is going to be bloody. 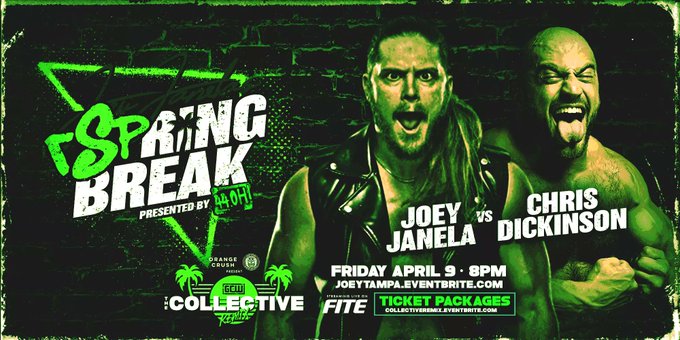 In the Marvel Cinematic Universe movie “Avengers: Age of Ultron,” Baron Zemo famously said, “an empire toppled by its enemies can rise again. But one which crumbles from within? That’s dead… Forever.” In a masterstroke of evil booking, RSP booked arguably the heart and soul of Game Changer Wrestling – Joey Janela and Chris Dickinson – against each other. Joey Janela is now a major television star with All Elite Wrestling, while Chris Dickinson is now starring with New Japan Pro Wrestling and Ring of Honor. The two long-time GCW Originals are back in a GCW ring and, this time, fighting each other in what’s sure to be a physical encounter. If they destroy each other in the process, then it’s just what Rickey Shane Page wanted. 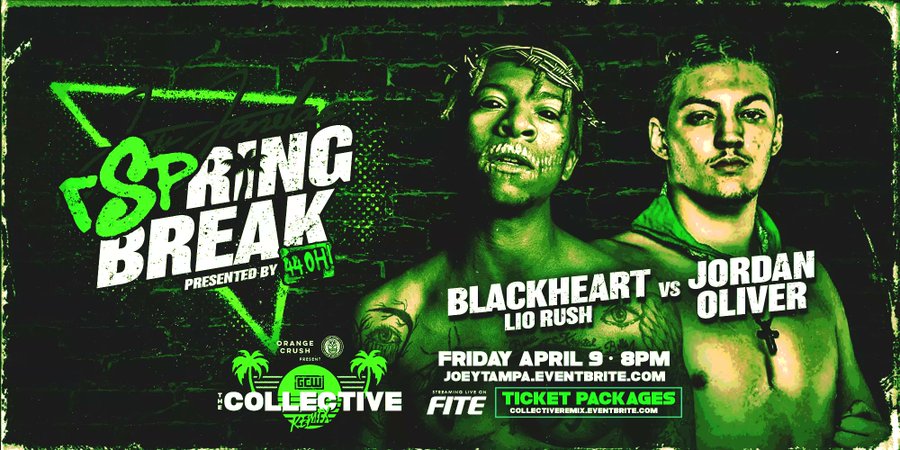 This was the other match originally booked by Janela before losing control of Spring Break, but since Page took control, Lio Rush has switched from bringing his regular persona to his more sinister personality, Blackheart. With all the same abilities as regular Lio Rush, when he’s the “Blackheart,” he’s no longer wrestling for fun; he’s wrestling for his opponent’s soul. The darker side of Lio Rush is something that Jordan Oliver needs to face. Oliver has become one of the absolute breakout stars of the pandemic era, with some pretty monstrous wins. Nonetheless, facing a twisted, driven Rush will push Oliver to a side he’s yet to truly embrace. 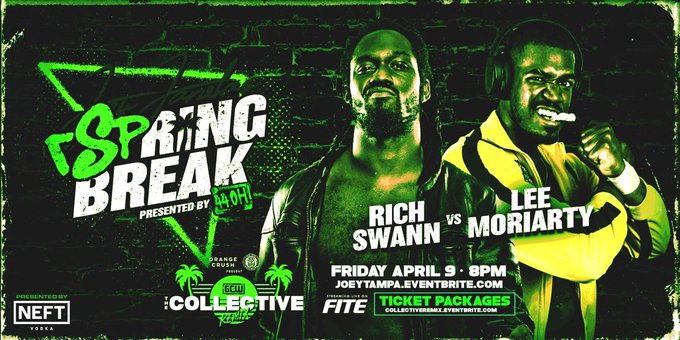 IMPACT World Heavyweight Champion Rich Swann returns to one of his favorite indie haunts at Spring Break in a huge match-up against arguably 2020’s wrestler of the year, Lee Moriarty. A standout in the Pennsylvania indies since his debut in 2015, by the end of 2019, Moriarty momentum was starting to gain national traction. In 2020, Moriarty exploded on the national stage, with huge matches against Alex Shelley, Nolan Edward, MV Young, and others. In June, at GCW The Wrld on GCW 2, he made his GCW debut against Tre Lamar, instantly becoming one of GCW’s new favorite stars. He would also break out into Black Label Pro, Beyond Wrestling, and others, collecting more Match of the Year candidates with the likes of Daniel Makabe, ACH, Alex Zayne, Chris Dickinson, and Blake Christian. This past October, he made his IMPACT Wrestling debut on IMPACT Xplosion, where he faced Suicide. He’s coming off a huge tournament victory at Enjoy Wrestling‘s Enjoy Cup, and in early March, ended WARHORSE‘s record-breaking 532-day reign as IWTV Independent Wrestling Champion. Moriarty has climbed the ladder quickly and now enters 2021 as one of the top stars in the U.S. indies period. 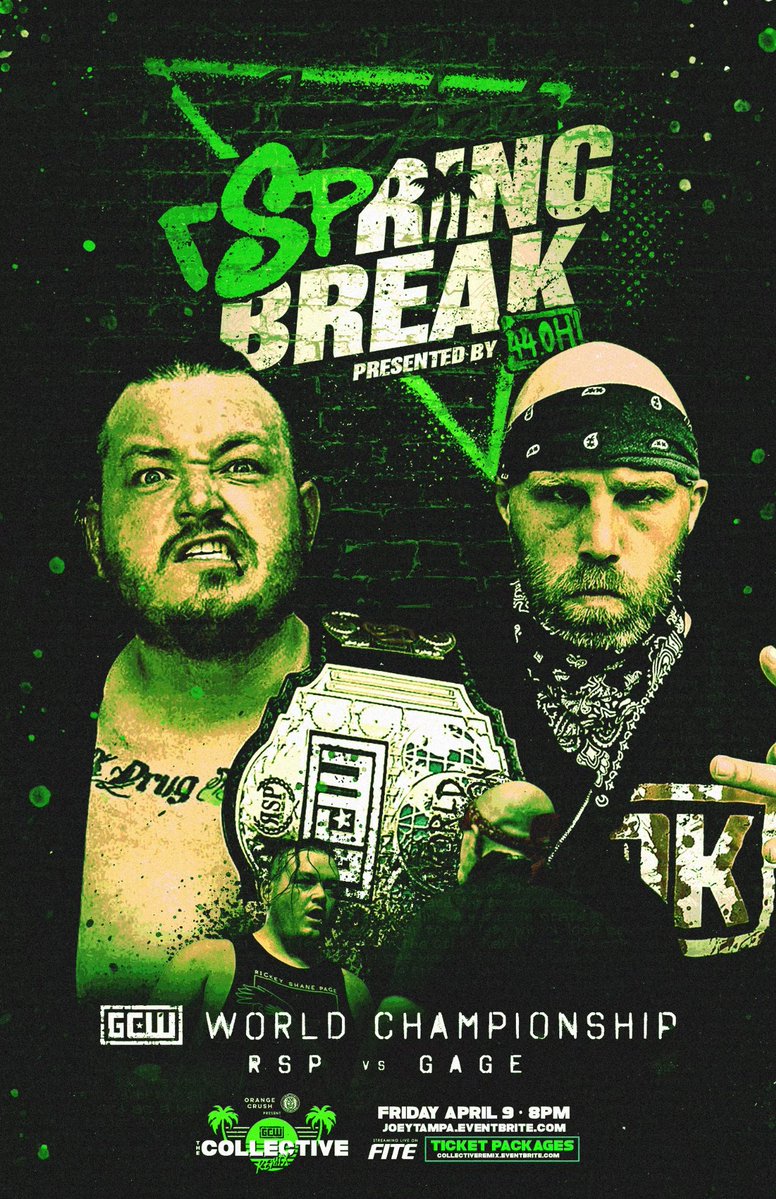 Ever since Nick Gage lost in his quest to regain the GCW World Championship from Rickey Shane Page at GCW Run Rickey Run in February of last year, when assumed MDK gang member Eric Ryan turned on Gage to help RSP retain, the gang-affiliated mob of Nick Gage fans awaited a rematch. If Janela and Dickinson are the heart and soul of GCW, Gage is GCW’s blood. For months after, RSP refused to defend against Gage again, while Gage fumed at the entire situation. The toll seemed to make its presence felt in Gage’s performances after that – after going over 700 days undefeated as GCW World Champion, Gage struggled in his home promotion.

Gage was knocked out of the Acid Cup 2 in the second round by Jordan Oliver and in July at GCW Homecoming, he lost to SHLAK in a deathmatch. To add injury to insult, at Beyond Wrestling‘s Two Weeks Notice show on July 26, 2020, Gage was seriously injured and had to step away from the ring. “The God of This Sh*t” made his shocking return to GCW at GCW Take Kare this past March and is now on a collision course to take back the crown he wore in GCW from December 2017 until December 2019. Regardless of who wins, there will surely be one man waiting in the wings – AJ Gray. It was Gray who actually ended Nick Gage’s 722-day reign as GCW World Champion and it was RSP who ended up suckering Gray and stripping him of the World Title just moments after his victory. To date, Page has yet to give Gray his rematch.

Stay tuned to the Last Word on Pro Wrestling for more on this and other stories from around the world of wrestling, as they develop. You can always count on LWOPW to be on top of the major news in the wrestling world, as well as to provide you with analysis, previews, videos, interviews, and editorials on the wrestling world. GCW Rickey Shane Page Spring Break is set to air on Friday at 8 PM EST on FITE.tv.