This is the final FUSION episode before Never say Never, and I fully expect MLW to pull out all of the stops. Calvin Tankman will be in action, and you can bet Contra Unit will do whatever they can to make sure he goes into his match with MLW World Heavyweight Champion Jacob Fatu less than one hundred percent. Mil Muertes will be in action against Gringo Loco, and Gino Medina will face off with Zenshi. We will be focusing on the night’s main even Chained Rope match. Let’s dive into the MLW FUSION Card 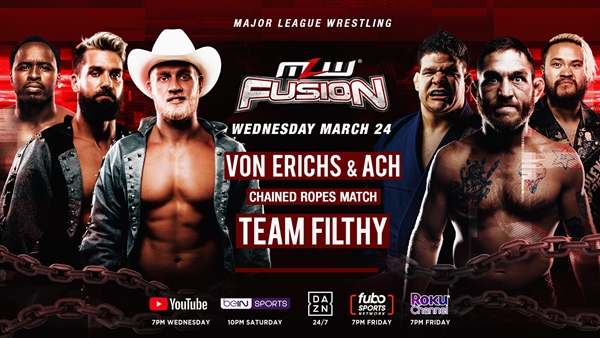 ACH and The Von Erichs finally get their hands on Tom Lawlor and the members of Team Filthy. Marshall and Ross have been begging for a shot at Team Filthy since they cost them the MLW World Tag Team Championship. For ACH, this a chance to get revenge on the man that eliminated him from the Opera Cup and the people who put him on the injured list for over a month.

Lawlor and his crew are merely looking to regain some momentum after King Mo’s devastating loss to Low Ki at Filthy Island. Lawlor is still riding high off his victory in the 2020 Opera Cup but will need all the wins he can get if he wants to be next in line for the MLW World Heavyweight Championship. Regardless of the outcome, this will be a brawl to remember.

Stay tuned to the Last Word on Pro Wrestling for more on this and other stories from around the world of wrestling, as they develop. You can always count on LWOPW to be on top of the major news in the wrestling world, as well as to provide you with analysis, previews, videos, interviews, and editorials on the wrestling world. MLW FUSION airs every Wednesday on fubo Sports Network and YouTube at 7 PM EST and every Saturday on beIN SPORTS at 10 PM EST.