For the first time since the retirement of Kenta Kobashi in 2013. The talent of Pro Wrestling NOAH returns to NOAH’s home, the historic Nippon Budokan. This isn’t the end goal for NOAH, but a starting point. After their troubling times in the past especially the dark days of the Suzuki Gun period. This is in some ways a shining light at the end of a dark tunnel. As they know they can make a proper comeback as they aim to be at the top of puroresu once again. In this article, we will look at most of the card highlighting the important matches and ones to watch out for to get you up to speed ahead of DESTINATION 2021 BACK TO BUDOKAN!

Note: This preview was co-written by Xavier Williams & Michael Hymantor

Full Card For DESTINATION 2021 BACK TO BUDOKAN

Muhammad Yone made it known at the end of 2020 that he wanted to team with Shuhei Taniguchi in 2021. Both veterans are former GHC Heavyweight Tag Team Champions. However, on their own, they haven’t been able to put the winning formula together so to speak. So maybe the two heavyweight powerhouses can provide results together. However, that hasn’t been the case thus far when they’ve taken on legitimate heavyweight threats. As they have suffered failure after failure Yet they have a chance to turn things around on the biggest show in recent memory for NOAH. However, this won’t be an easy win. With the heavy hitters from the M’s Alliance on the other side. Masato Tanaka of Zero-1 recently joined the M’s Alliance to much fanfare on the January Fourth Korakuen Hall event. While Masaaki Mochizuki of Dragon Gate is a founding member of the M’s Alliance. While they aren’t in NOAH full time they’re in it enough to be a serious contender for any of the belts. They make a dangerous team and could kick off what could be a big night for the M’s Alliance.

STINGER is a dominant junior heavyweight group in NOAH. With Yoshinari Ogawa and Kotaro Suzuki previously being the core two of the group. They got stronger last year during the beginning of the ongoing pandemic by adding HAYATA to the mix, and from the looks of things they seemed to be getting along quite well. One little miscommunication from HAYATA and Kotaro led to them coming to blows, however. Then Ogawa along with HAYATA laid out Kotaro, removing him from STINGER. NOSAWA Rongai then tried to be Kotaro’s partner. However, Kotaro insisted he didn’t need his help and had a partner. After that NOSAWA tried to side with STINGER, although the puppet master Yoshinari Ogawa was hesitant to accept. Kotaro then brought in a masked tag partner in an attempt to take down STINGER. Then when they met Ogawa and HAYATA the masked man turned on Kotaro Suzuki. Revealing himself to be Yuya Susumu who has connections to HAYATA and several other people in NOAH. Joining STINGER in the process. After the match is when things got intriguing as NOSAWA appeared with his masked part-time friend as he called him. Shaking hands with Ogawa and the rest of STINGER seeming to have formed a partnership. That’s when NOSAWA and the masked man jumped them and let Kotaro know that they wanted to align with him instead. Kotaro agreed although he didn’t completely trust NOSAWA. Then on the big January Fourth Korakuen Event, the second masked man was revealed to be Ikuto Hidaka! Hidaka then claimed the war had just now begun. After STINGER successfully retained their belts against the KONGOH Juniors, Hidaka and Suzuki stormed the ring along with NOSAWA laying them out. Before Hidaka and Suzuki announced their title challenge. This match is the big culmination of Kotaro Suzuki seeking his revenge on STINGER. Will he vanquish them or will STINGER prove to be unkillable.

Daisuke Harada has quickly turned around his bad luck as of the past few months. At one point holding both the GHC Junior Heavyweight Singles and Tag Belt at once. Knocking back challenger after challenger, but after defeating his rival Hajime Ohara a new challenge approached. Seiki Yoshioka of Full Throttle said he was inspired by his leader Ohara to step up and challenge Daisuke Harada for the GHC Junior Heavyweight Championship. Daisuke accepted and the match was made for the big return to the Budokan. For Daisuke Harada, he’s probably looking to establish the fact he is the junior ace and won’t be overshadowed by anyone. However, this challenge is a bit different from the others. Seiki Yoshioka came to NOAH after the closure of WRESTLE-1, where he was a former Cruiserweight Champion. Since then he’s only had one singles match with Daisuke Harada during the no fans period, and that’s where they went to a draw. Since then they’ve met in numerous tag matches, but they’ve stayed apart from one another when it comes to singles matches. In this scenario, you’d assume there must be a winner, and with a match that’s been as protected as this one you have to wonder will the landscape of the junior division change, or does Daisuke Harada have the division on lock. 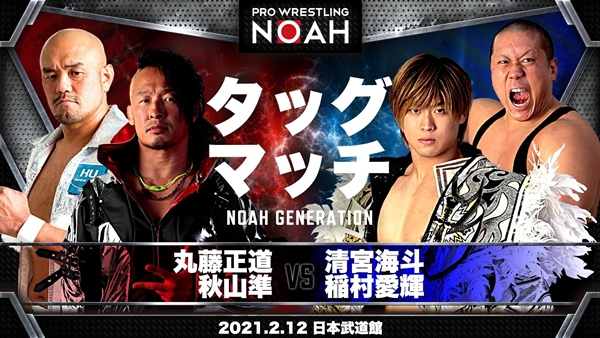 In 2020, DDT would form a partnership with Pro Wrestling NOAH with NOAH now being owned by CyberAgent. Through this partnership, multiple stars would make appearances for the separate companies, this tag match represents that partnership between DDT and NOAH with Jun Akiyama teaming with Naomichi Marufuji. This tag team was formed out of a pact that these two had, with the history of these two going back decades, and even recently, in the 2018 Champion Carnival. Marufuji said the next time he wants Akiyama, that he wants it to be a tag team match. This dream team goes against Yoshiki Inamura and Kaito Kiyoyiya.

Kaito Kiyomiya and Yoshiki Inamura were recent challengers for the GHC Heavyweight Tag Championships, now they face another major challenge in Akiyama and Marufuji. Something to note here is that this is Akiyama’s first appearance for the company since 2019. Inamura could make a name for himself in this match against the two company legends and Kiyomiya will be looking to prove himself once again against the very best. 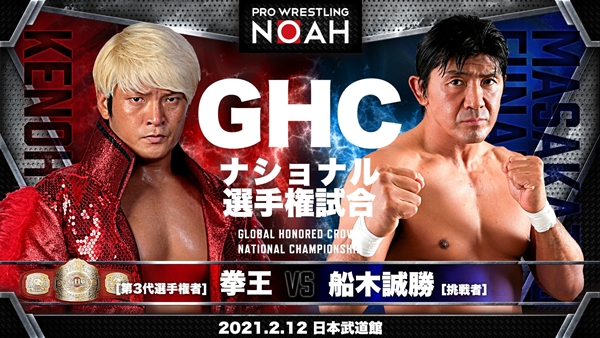 Kenoh’s reign as GHC National Champion has been filled with ups and downs, Kenoh started the reign by defeating Katsuhiko Nakajima, after his draw against Go Shiozaki, Kenoh would go into multiple different feuds in NOAH. But recently has started to get involved in feuds with former MMA fighters such as Kazushi Sakuraba and Kazunari Murakami. Kenoh’s next challenger will be against a veteran of the business known as Masakatsu Funaki. Funaki, like previous challengers, has tons of MMA experience, going back into the 1990s and Pancrase.

Funaki has been with Pro Wrestling NOAH since the end of 2020, making his return in a 4 vs 4 match with Naomichi Marufuji, Keiji Mutoh, and Masaaki Mochizuki as part of M’s Alliance. At the beginning of 2021, Funaki would challenge Kenoh to a title match after his bout with Murakami, and at the last show did have a submission victory against Kenoh. Will the veteran Funaki be the one to finally end the reign of the dominance of Kenoh or will Kenoh continue to hold the GHC National Championship? 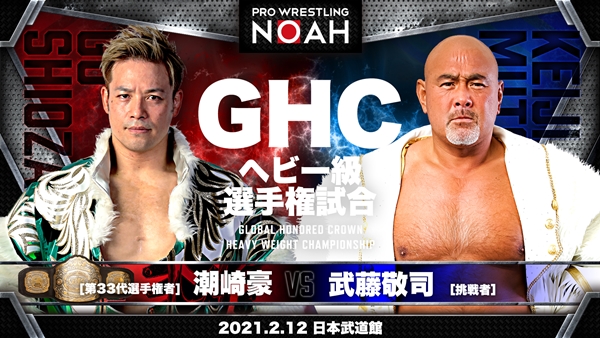 In the main event of the evening, we have a match a year in the making. At the end of 2019, Keiji Mutoh would make his first appearance for the company since 2017. The first feud he would go into would be against Naomichi Marufuji and very slowly in 2020 has been rising through NOAH by defeating people like Kenoh and Shuhei Taniguchi, while also being very successful within the tag and trios matches, Mutoh challenged Go Shiozaki. Someone who considers himself to be the personification of what NOAH is.

Go Shiozaki has faced veterans, he has faced brawlers, he has faced technical workers and throughout the entire reign has gone extremely long in his matches against every challenger that he has had in this reign as GHC Heavyweight Champion. He defeated a prince, now Go Shiozaki must defeat a true legend of the wrestling business in a match that is of equal importance. For Mutoh, it’s a dream to hold the trinity of the most important belts within Puroresu. Mutoh has held the IWGP Heavyweight Championship (NJPW) and Triple Crown Championship (AJPW) and wants to hold the one belt that eluded his career by being the third person to earn that major accomplishment.