“The Phenomenal” AJ Styles is entering his fifth year as a member of the WWE main roster. After weeks of speculation after a classic at New Japan Pro Wrestling’s Wrestle Kingdom 10 versus then-IWGP Intercontinental Champion, Shinsuke Nakamura, the weeks leading up to the Royal Rumble was the age-old question of “will he, won’t he?” On January 24th, 2016, AJ Styles surprised the world, entering the Royal Rumble match as the third participant. He would go head to head with the WWE Champion at the time, Roman Reigns.

5 years ago today, AJ Styles made his WWE debut at the Royal Rumble. pic.twitter.com/7rFPIlyIbZ

As mentioned, Styles entered the Royal Rumble match in a familiar city, Orlando, FL at the Amway Center. The Gainesville, GA native would last nearly 30 minutes (28:58) before being eliminated by Kevin Owens. Despite only scoring two eliminations, Styles had arrived! Styles would go on to have his first rivalry with Chris Jericho, as they both would trade victories against each other. They would wrestle at the likes of Fastlane, even team with each other briefly against then-WWE Tag Team Champions The New Day. Styles and Jericho would have their WrestleMania match to end their feud, which Styles ultimately lost.

The RAW after WrestleMania would spark a breakout run for AJ Styles, who was already a highly regarded professional wrestler around the world by this point. Styles would win the number one contender’s fatal four-way match to earn a shot at then-WWE Champion, Reigns. After two unsuccessful opportunities against the “Big Dog,” Styles’ next target was the biggest fish in the pond.

• Made his shock debut at the Rumble.

• Put on classics with Roman and Cena.

One OF If Not THE Best Rookie Year in Recent Memory..👏 pic.twitter.com/TgO7v1IHNm

On the Memorial Day 2016 (May 30th) edition of Monday Night Raw, John Cena would make his return to the WWE for the first time since WrestleMania, and the Green Bay, WI crowd would wake up as Cena would face off against Styles in the ring. The two would face off in singles and tag matches, with Styles winning at both Money in the Bank and SummerSlam.

Styles was drafted fourth overall, as the second pick for the SmackDown brand in the 2016 Draft, and would challenge then-WWE Champion, Dean Ambrose at Backlash. After a low blow, Styles would win the WWE Championship for the first time becoming the 48th WWE Champion in history. He would hold the WWE Championship for 140 days, losing the title to Cena at the 2017 Royal Rumble. Styles would stay in the title picture throughout the Road to WrestleMania, ultimately losing at Elimination Chamber and on SmackDown.

The House that AJ Styles Built: Styles’ Year of Dominance

A rivalry with then-Smackdown Commissioner, Shane McMahon lead to a match at WrestleMania 33. Styles would then shift his focus onto the United States Champion, Kevin Owens. Styles would win the title off of “The Prizefighter” twice, once at a WWE Live event at Madison Square Garden,  and on a Smackdown episode (July 25, 2017) involving a returning Chris Jericho. Styles would hold the title until Hell in a Cell losing the title to Baron Corbin in a triple-threat match also involving Tye Dillinger. 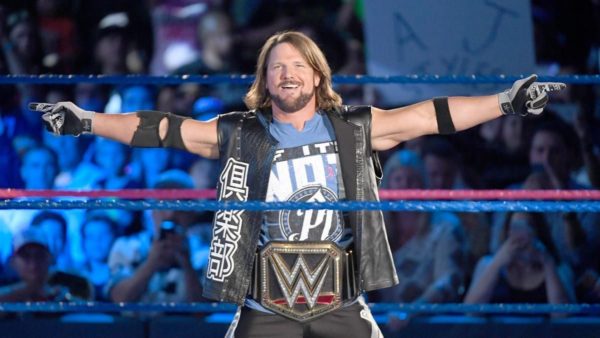 Styles would compete in various rivalries throughout the next few years, switching brands a few times from SmackDown to Raw. He would feud against the likes of Randy Orton, then-WWE Universal Champion, Seth Rollins, and Ricochet. Against the “One and Only,” Styles would again win the United States Championship, holding it for 134 days. He would enter his second Royal Rumble match four years after his debut, only to get eliminated by a returning Edge. Styles would feud against The Undertaker at WrestleMania 36 in what would be “The Phenom’s” last match in WWE (as of this publication). Styles would also win his first Intercontinental Championship via a tournament, defeating Daniel Bryan and holding the title for 70 days. He would ultimately lose it to longtime rival, Jeff Hardy. After flirting with SmackDown during his Intercontinental title run, Styles would return back to RAW and have a brief program with current-WWE Champion, Drew McIntyre. They would clash at TLC: Tables, Ladders and Chairs 2020, with Styles ultimately failing to win the WWE Championship a third time.

Where does AJ Styles go from here? At age 43, Styles is at a crossroads of his career.  Where does Styles find himself in the latter part of his career and what’s next as he enter year number six in the WWE? An answer may not be known right off the bat, but wherever direction Styles’ career may go, it will be simply “Phenomenal.”