All Japan Women’s Pro Wrestling (AJW) is one of the biggest pro wrestling companies in the history of Japan.  The all women’s promotion housed some of the biggest women’s stars in wrestling history.  Legends Of AJW will take a look into the careers of some of AJW’s legendary talents.  This edition focuses on one of the best wrestlers of all time the “Dangerous Queen” Akira Hokuto.

Few wrestlers throughout wrestling history could combine charisma, ring work, and a badass aura the way Akira Hokuto did at her peak.  At one of the highest points in AJW history, she was arguably the most popular member of the roster and often featured in the main event of the company’s biggest shows.  She wasn’t always the dangerous queen but Hokuto was always destined for greatness, hopefully this article can shine some light on some of the less celebrated periods of her career.

Hokuto debuted in 1985 under her real name, Hisako Uno.  She had instant success as she set the record for most consecutive wins after a debut.  Hokuto made it to the finals of 1985’s rookie of the year tournament but lost to Akemi Sakamoto, who retired in 1986 due to a knee injury.  Hokuto continued her early success when she captured the AJW Junior Championship in March 1986, less than a year into her career.  In a big sign of the company’s faith in her, Hokuto beat Condor Saito who had debuted a year before Hokuto.

During a 2/3 fall match in 1987, the team of Yumi Ogura and Kazue Nagahori end a fall by hitting a TOMBSTONE OFF THE SECOND ROPE onto Hisako Uno. Uno suffered cervical vertebrae damage (her neck was broken), yet she finished the match. Uno later changed her name to Akira Hokuto pic.twitter.com/ErXGiOgbVs

In 1987 Uno was teaming with Yumiko Hotta as the WWWA World Tag Team Champions, another huge accolade for two performers with just two years experience.  Their reign ended at the hands of Red Typhoon (Yumi Ogura & Kazue Nagahori).  In this match, Uno suffered a broken neck from a tombstone piledriver from the second ropes. Miraculously, she FINISHED THE MATCH!  Before missing around 8 months.  Her injury was so bad that she was initially advised to retire by doctors, but as we would learn Akira Hokuto was no normal human and never let pain get in her way.

Upon her return, she changed her name from Hisako Uno to Akira Hokuto and began teaming with Suzuka Minami as the Marine Wolves.  The duo were a fairly popular team thanks to their fast-paced wrestling and Hokuto’s androgynous good looks, which were desirable at the time as AJW stars were tasked with being singers and gaining new fans as entertainers.  It wasn’t until late 1989-1990 that the two saw any kind of sustained push as AJW was pushing new stars in the post Crush Gals (Chigusa Nagayo & Lioness Asuka) era.

During that period Hokuto was arguably the second most popular performer in the company, just behind Bull Nakano, as AJW relied on veterans like her and Nakano to hold down the top of the card while they got over younger stars like Manami Toyota, Aja Kong, and Kyoko Inoue.  It is reasonable to assume that Hokuto was on course to win the 1990 Japan Grand Prix (AJW’s biggest annual tournament) but she suffered a knee injury in her match with Manami Toyota and despite her protests, the referee called off the match.  This meant that AJW had to hold off on running Hokuto vs Nakano, their biggest singles match possible, until 1991.  This match allegedly drew 1,900 fans to Korakuen Hall and received a 5 star rating from Dave Meltzer.  During this time Hokuto couldn’t win the WWWA World Championship but she did capture the All Pacific Championship a number of times

She suffered a number of other injuries during this time, notably having her arm heavily taped for most of early 1991, so much so that she earned the nickname “the mummy” due to her constantly being bandaged up.  Hokuto was popular during this time but her best run was yet to come. 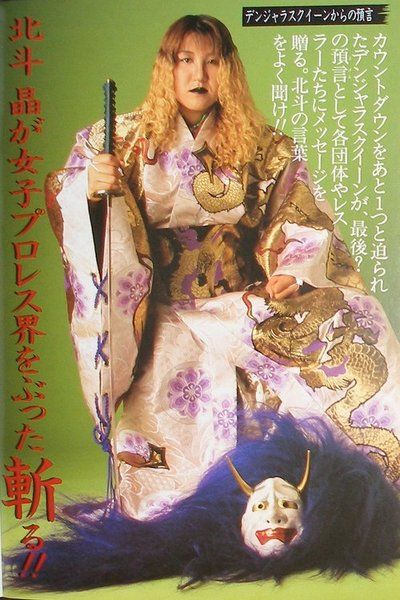 The transformation to the Dangerous Queen is what helped Hokuto become the most popular performer on the roster and one of the most credible stars they have.  The transformation was slow.  Her hair got longer, she dyed it blonde, she donned new gear, and she turned “heel” to form Las Cachorras Orientales alongside Etsuko Mita and Mima Shimoda.  Most importantly she changed her in-ring style to incorporate slaps, punches, and dropping her opponent on their neck at every opportunity, her matches began to feel like a fight more than a wrestling match.

In 1993 Hokuto had her most high-profile feud against Ladies Legend Pro Wrestling’s (LLPW) Shinobu Kandori.  Kandori had made the jump from the world of Judo and from day one her gimmick was that she didn’t respect professional wrestling.  Kandori had debuted for the original JWP (Japan Women’s Pro Wrestling) but when that company split she became the ace of LLPW (a shoot wrestling focused promotion).  Kandori had earned a reputation as a tough SOB with her stiff wrestling style and submission prowess carried over from her Judo days.  Hokuto and Kandori met at the huge Dream Slam event in front of 16,500 fans in the co-main event.  Their match is one of the bloodiest, most violent matches AJW has ever seen as the two brawled all over the arena and hit each other with stiff punches throughout their 30-minute war.  It was this match that earned Hokuto the name the “Dangerous Queen” as she went to war with, and defeated, one of the toughest women in Joshi wrestling.

Akira Hokuto climbs over an exhausted Shinobu Kandori for the 3 count during All Japan Women's "Dream Slam I" on April 2nd, 1993. Many to this date still consider it the best women's match of all time. If you've never seen this, check it outhttps://t.co/4zrOvcihLl pic.twitter.com/u5oAuQxqOQ

This wasn’t their only meeting that year, Kandori got some revenge at Dream Slam 2 in a tag team match.  This wasn’t the end of their feud as Hokuto appeared on LLPW’s first-anniversary show and defeated company president Rumi Kazama in a hair vs hair match.  Hokuto refused to let go of the match-winning submission which brought Kandori into the ring to fight Hokuto off.  This helped build to the rematch between the two at AJW St. Battle Final at Ryokgoku.

Their rematch was just as violent as the first as the two had months of built-up aggression to unleash on one another.  This time around Kandori was on a whole other level as she had an answer to everything Hokuto threw at her.  In typical fashion, Akira Hokuto didn’t stay down and fought on, much to the horror of her fellow roster members who watched on in tears as Hokuto took punch after punch from Kandori.  In the end, Hokuto was put down by one last uppercut after a display of fighting spirit that may never be matched.

Kandori has an entirely different aura about her this time. She has an answer for everything Hokuto dishes out, just beats her up with ill intent. pic.twitter.com/cBcFHxnnbr

This two-match series, more than any other, helped Hokuto become one of the most popular performers in the company.  The crowd was dying to see her defeat Kandori and her never say die attitude made it so easy to root for her.  Coming out of the feud, despite losing the rematch, she was easily one of the top tier of stars in AJW alongside Kong and Toyota.

In 1994 it was clear that Hokuto was winding things down, she had been part-time since 1993 and the injuries were piling up.  That didn’t stop her from competing in big matches on AJW’s biggest shows of the year.  At Wrestling Queendom 1994 Hokuto actually teamed with Shinobu Kandori against Aja Kong and Bull Nakano.  That’s right, just months after going to war Kandori and Hokuto were tasked with teaming together. Initially, they refused to work together and got decimated by the two monsters on the opposition team, slowly but surely they began to realize that to survive they’d have to work together and they finished things off with Hokuto pinning Aja Kong, who had been WWWA Champion for 18 months at the time.

One of the most iconic magazine photos ever. Akira Hokuto makes it known she doesn't care who she faces during the V*TOP Tournament at the Big Egg Tokyo Dome show on November 20th, 1994. She ended up beating Eagle Sawai, Combat Toyoda, and Aja Kong to win the tournament pic.twitter.com/xXrJjUWo4A

In November of 1994 AJW held AJW Doumu Super Woman Great War ~ Big Egg Wrestling Universe, the first and only AJW show to take place at the Tokyo Dome.  Hokuto was one of the marquee names on the show as she took place in the V TOP WOMAN Tournament, a huge cross-promotional tournament featuring some of the top stars in all of Joshi.  Not only that but Akira Hokuto announced that she would be retiring at this show, although she added the caveat that she may change her mind if she won the tournament.  Funny enough, Hokuto DID win the entire tournament.  She beat Eagle Sawai, Combat Toyoda, and finally a wounded Aja Kong on her way to tournament glory.  After the match Kong tried to present Hokuto with the WWWA Championship, the world title of AJW, and the one that had alluded her for her entire career, but Hokuto refused, true to her word Hokuto put off her retirement following her big win.

In 1995, she was split between AJW, WCW, and CMLL and remained a special attraction for AJW, she was drafted in to face Manami Toyota in the main event of AJW Destiny at Nippon Budokan.  She was still a big deal in AJW, and a major star, but her time being so spread out meant she wasn’t a focus for the company and mostly served as a good name to have on shows to sell tickets.  She did still represent AJW at the historic cross-promotional event in North Korea that saw NJPW take on WCW, she wrestled on each show, once against Bull Nakano, and as a team with Nakano against Toyota & Mariko Yoshida.

In 1996 Akira Hokuto left All Japan Women’s Pro Wrestling and joined GAEA Japan, a promotion run by Chigusa Nagayo.  She saw out her career as a GAEA performer, with a break in 1998 to have a baby with fellow wrestler Kensuke Sasaki.  As part of the GAEA/WCW partnership, she won the WCW World Women’s Championship and even held the AAAW tag titles but she never held top gold in Japan.  Hokuto retired in April 2002, although in the mid-00s she would appear in some random squash matches against men or in tag matches as part of the Kensuke family.  She remained away from the wrestling business after 2006 until she returned in 2020 as one of the public faces of Joshi Pro Wrestling ASSEMBLE.

Akira Hokuto will go down in history as one of the best wrestlers of all time, not only that but she is undoubtedly the greatest performer to never hold the WWWA Championship.  She is, however, the first and so far only woman to win a Tokyo Dome main event match and nobody can take that away from her.