Match Point is an on-going series at Last Word on Pro Wrestling, where we look at intriguing matchups in indie wrestling and beyond. They may be dream matches, first-time matchups, or hotly anticipated rematches. In this edition, we will look at one of the marquee matches of Game Changer Wrestling‘s 24-hour event Fight Forever, as GCW all-star Chris Dickinson, fresh off his NJPW debut, faces off against one of GCW’s rising new stars, Juicy Finau.

While US indie wrestling may not have the same long term storytelling opportunities as major TV wrestling companies do (mostly due to top stars signing elsewhere), the scene itself can produce some amazing stories, all culled directly from performers’ real-life stories. On Saturday, January 30, as part of Game Changer Wrestling (GCW)‘s GCW Fight Forever finale, the 6-8 pm block GCW The Wrld on GCW 3, two great stories will collide. On one hand, you have GCW veteran Chris Dickinson, who has paid his dues in this business as a pin eater to bigger stars, making his name in tag team wrestling, and finally exploding out in singles action, culminating arguably in his recent debut for New Japan Pro Wrestling (NJPW). On the other hand, you have Juicy Finau, a prospect from the West Coast indie scene, who has shown that hard work, respect, and a genuine love for this industry can lead to some powerful doors getting opened, emerging as one of GCW’s breakout stars in 2020.

Donate:https://t.co/lkPjyToNDS#FightForever streams LIVE & FREE for everyone on Youtube & FiteTV! pic.twitter.com/02GKipZcTT

Chris Dickinson got his break in 2008 with Jersey All Pro Wrestling (JAPW), and a year later became one of the new faces of Beyond Wrestling and Absolute Intense Wrestling (AIW) in 2009. He became AIW Intense Champion for 190-days from 2009 into 2010 and won JAPW Tag Team gold alongside Sami Callihan in 2010. But while today’s indie fan is inundated with multiple streaming services to watch independent promotions around the world with ease, the 2000s and early 2010s were much tougher to track down unless you lived in the area.

In 2014, he debuted with another New Jersey promotion, Jersey Championship Wrestling (JCW), and came out hot – he had early wins over the likes of Joey Janela, D’Lo Brown, and Tatanka and won the 2014 JCW Jersey Cup, defeating Chris Sabin, Sabu, Pinkie Sanchez, and finally Janela, in the process. But all that momentum ended when JCW rebranded as Game Changer Wrestling in 2015 under new ownership. From 2015 until the end of 2018, Dickinson went 0-9 in GCW. He didn’t pick up his first official GCW victory until he defeated Tony Deppen at GCW They Said It Couldn’t Be Done in February of 2019. And while he was on a losing skid in GCW, over in EVOLVE Wrestling, he was primarily used in tag team action – although he was a 2x EVOLVE Tag Team Champion with Jaku for a combined 477-days. Since his victory over Deppen, Dickinson has exploded as GCW’s most dominant singles wrestler not named Nick Gage, going 30-6 in two years. Now a regular with NJPW as part of their US-centric show NJPW STRONG, it’s almost a guarantee that we’ll see “Dirty Daddy” at Tokyo Dome one January 4 in the future. His 12-year journey has led to him being one of the top US indie stars of the past two years, not just with GCW but with Beyond Wrestling, Black Label Pro, ICW No Holds Barred, CHIKARA, Championship Wrestling From Hollywood, Glory Pro, Paradigm Pro, and the list goes on. He made his Japanese debut in 2020 with GCW as well as FREEDOMS and ZERO1. He is not only one of GCW’s greatest stories, but one of pro wrestling’s. 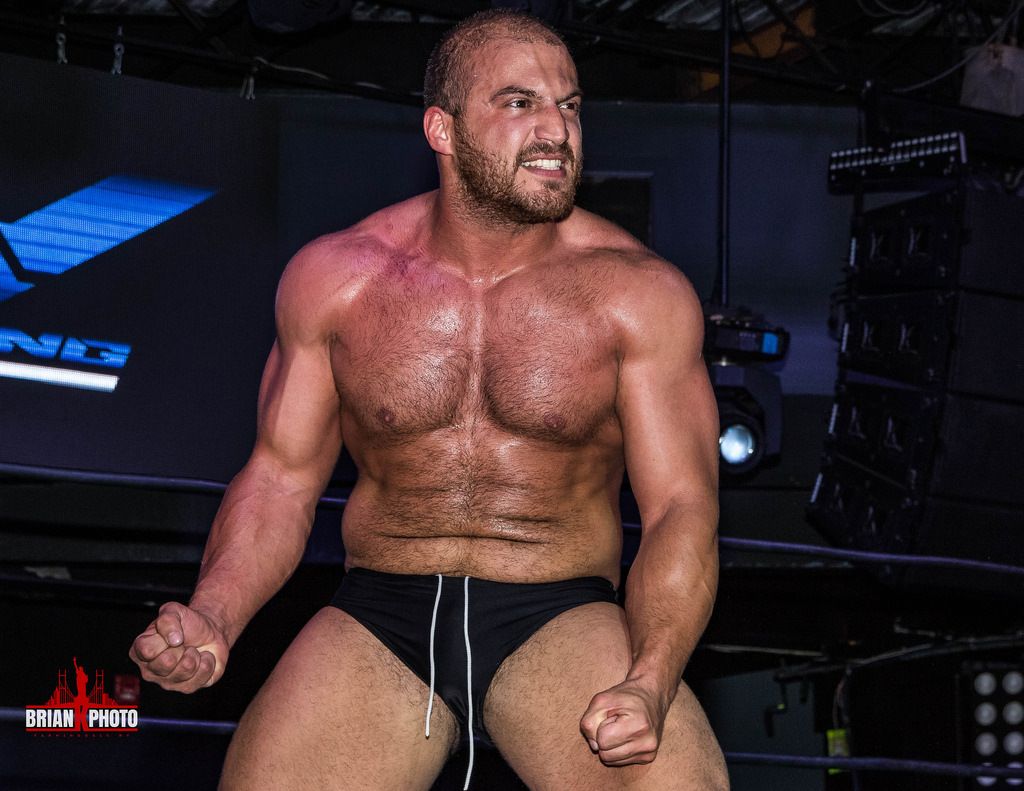 His opponent is an equally great story, but for completely different reasons. Juicy Finau isn’t Chris Dickinson. Chris Dickinson is a well-muscled, athletic-looking, super technical skilled beast who even WWE would slobber over. Juicy Finau is a regular looking man, somewhat bigger than normal, and although Pacific Island in heritage, unfortunately, doesn’t have the good fortunes to be associated with the Anoa’i family. But what he does have, is a passion for the business of professional wrestling. And in particular, the hard work that goes into being an independent wrestler. Cleaning the dojos. Setting up the ring. Tearing down the ring. All the small things that thousands and thousands of indie stars (and major TV stars) have had to endure in their own journeys. But it was Juicy’s dedication to that tradition and respect from young grapplers that has opened up the doors faster than many have encountered. Last October, Finau flew from California to Indiana to volunteer on the ring crew for GCW’s The Collective weekend and was rewarded with a spot in the Clusterf**k Battle Royal at Joey Janela’s Spring Break 4. Between his appearance and his story, he went viral that weekend. That buzz led to Finau becoming a regular with GCW, competing against the likes of Kyle The Beast (KTB), Blake Christian, Jordan Oliver, and even a non-title match against GCW World Champion Rickey Shane Page. Now, as Chris Dickinson’s career is about to launch beyond just US indie wrestling, Juicy Finau will compete against a GCW Original, in a match that will define the evolution of GCW and project its future. 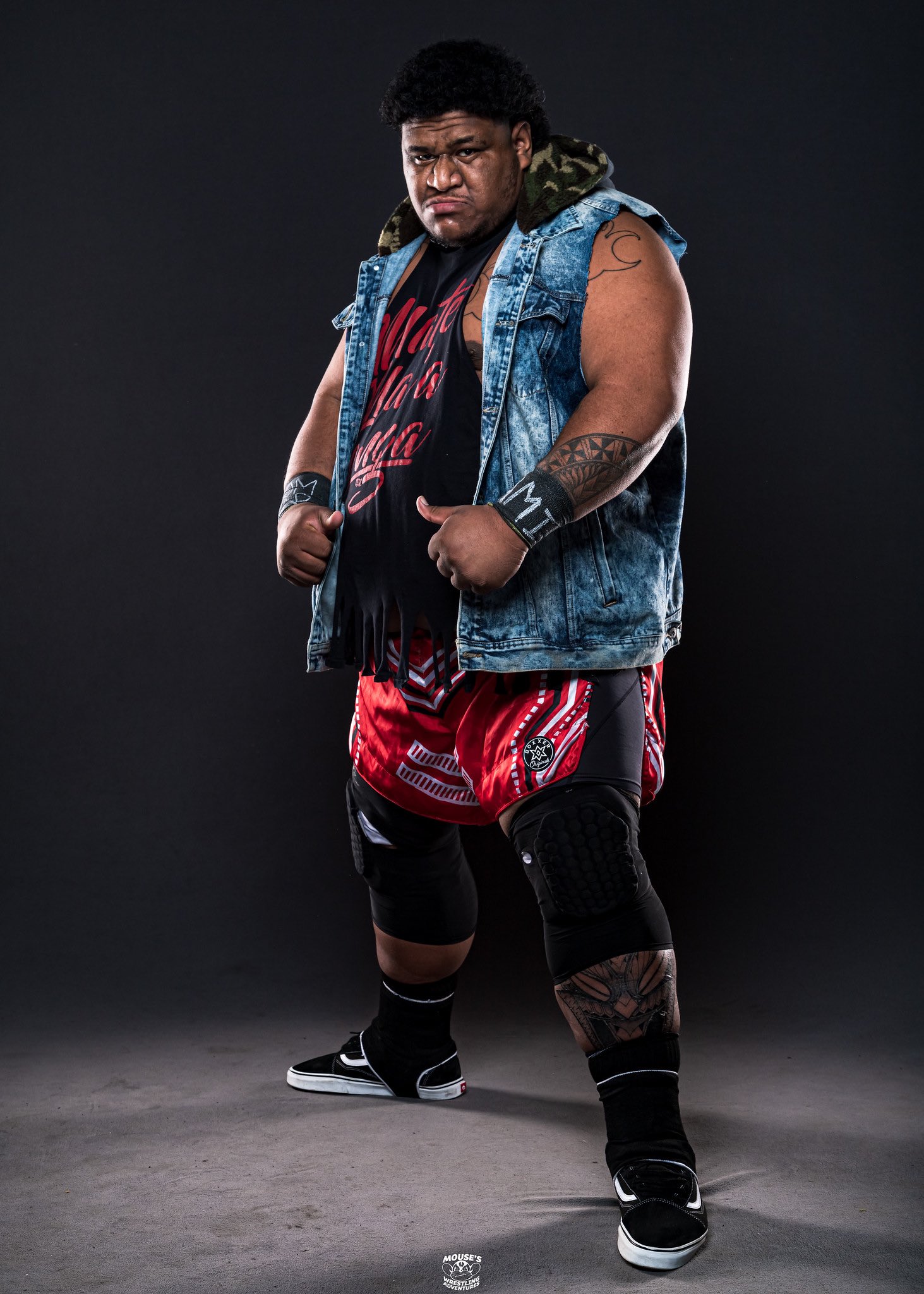