Tuesday’s AEW Dark features a huge card of 15 matches, huge debuts, and a show dominated by woman’s wrestling. This is a preview of Tuesday’s match card:

Santana and Ortiz vs. Ryzin and Mike Verna.

M’Badu and KC Navarro vs. The Butcher and The Blade.

Luchasaurus and Jungle Boy vs. Lee Johnson and Aaron Solow.

A Walk Off with Peter Avalon and Lee Johnson with Brandi Rhodes, Jerry Lynn, and Aubrey Edwards as the judges.

Cody Rhodes will be paying particular attention to this week’s AEW Dark match between Britt Baker and Brooke Havoc. Brooke Havoc was the first student Cody ever trained in the Nightmare Factory and has noted he cannot believe how quickly his first student has developed. Cody has said, “This is my very first student, I never anticipated somebody would be ready this early on, but she did the work and earned this opportunity. (She was actually Britt’s “intern” when she shadowed TV). VERY tough draw for her here, but I love this! Brooke’s true first pro match.”

Cody must be very impressed with her progression, since he has previously stated that he doesn’t want his student to think they have a free road into AEW just because they are one of his students. For him to break that rule with Brooke Havoc, Cody must see a lot of potential in Brooke Havoc.

This week’s AEW Dark was originally advertised as a 16 match show with the promotion tweeting out the huge card on 1/24/21 from their AEW Dark Twitter account. However, for reasons unknown, that tweet was deleted and a new tweet was sent out a day later with one match mysteriously absent. That match being: Ryan Nemeth, Vary Morales, and Shawn Dean vs. Dustin Rhodes, QT Marshall, and Nick Comoroto. This match is interesting for a number of reasons. First the debut of Dolph Ziggler’s brother Ryan Nemeth. Ryan Nemeth is an 11 year veteran of the business coming out of the Cleveland area. He was trained professionally by Rip Rogers and has performed for a number of companies over the years including Tommy Dreamer’s House of Hardcore, Nuclear Heat Wrestling, Millennium Pro Wrestling, and Bar Wrestling. WWE fans may recognize him from his short run in the company under the name of Briley Pierce, where he performed in OVW, FCW, and in the early days of NXT between the years of 2012-2013.

Why this match was cut from AEW Dark is unknown, however it can be speculated that a new direction for newcomers Nemeth and Comoroto could be in the works, and maybe AEW has bigger plans for the new debuts. 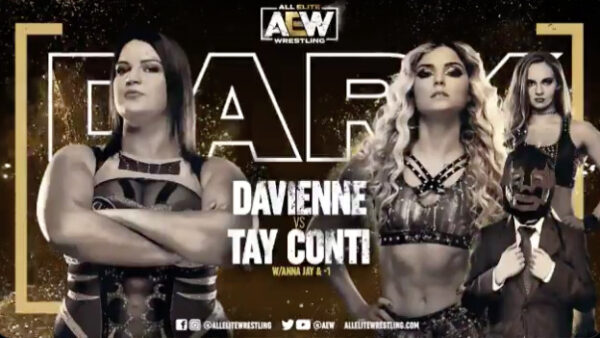 As we covered in detail when it was announced US indie star Davienne makes her debut on AEW Dark this week.  Davienne has been wrestling since 2013 who has competed all over the US and even had a run in Japan with Marvelous.  She takes on Tay Conti in her debut and will be hoping to impress to earn a spot on the roster.