Founded in 2014, Lucha Memes is an independent lucha libre promotion based out of Coacalco de Berriozabal. Since their debut in September of 2014, Lucha Memes has held shows regularly, featuring some of the best indie wrestlers in Mexico, as well as featuring stars from both CMLL and AAA on occasion. In 2020, the company began broadcasting shows on IndependentWrestling.tv (IWTV), and on Friday, January 22, 2021, Lucha Memes is traveling north of the border for the first time in its history, with a special Guerra De Naciones event being held in Texas, pitting many of Lucha Memes (and Mexico)’s top stars against some of the best of the US indies, in what is being been billed as a “lucha libre vs Pure wrestling” special event. While Lucha Memes back catalog is available on IWTV, so far there has been no mention of when the event taped on January 22 will air on the network. 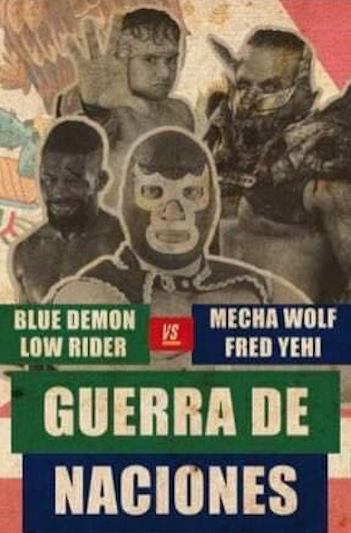 On the Lucha side, the Lucha squad is lead by the legendary Blue Demon Jr., son of the original Blue Demon who helped popularize lucha libre internationally from the 1940s until the late 1980s. Blue Demon Jr. himself debuted in 1984, just before his father’s retirement in 1989, and has competed for every major Mexican promotion like AAA Lucha Libre, Consejo Mundial de Lucha Libre (CMLL), Universal Wrestling Association (UWA), World Wrestling Association (WWA), International Wrestling Revolution Group (IWRG), and The Crash Lucha, and appeared in the first season of Lucha Underground.

A former AAA Latin America Champion, 2x WWA World Welterweight Champion, and Mexican National Cruiserweight Champion, Blue Demon Jr. also held the NWA Worlds Heavyweight Championship, winning it in 2008 and holding it for 505-days. Blue Demon Jr. will be pairing up with Texas luchador Low Rider, who has spent much of the past decade working in Mexico with the likes of Desastre Total Ultraviolento (DTU) and AAA Lucha Libre, as well as the Southeastern US indies, and in the spring of 2020, appeared on two episodes of All Elite Wrestling (AEW)‘s AEW DARK series.

The Pure wrestling tandem features two top stars of the US indies, starting with Fred Yehi, who recently made his Ring of Honor debut as part of the Pure Championship tournament, where he defeated Silas Young in the opening round, before losing to “Hot Sauce” Tracy Williams in the quarter-finals. Yehi has been a standout in the US indies over the past few years with memorable runs in EVOLVE Wrestling, where he was a part of the Catch Point team with Drew Gulak, Williams, Chris Dickinson, and others, as well as ACTION Wrestling, Beyond Wrestling, and Full Impact Pro (FIP), where he was FIP World Champion for 562-days. 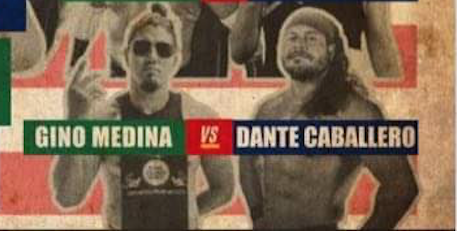 In singles action, team Lucha is sending in a second-generation luchador in the form of Major League Wrestling (MLW) star Gino Medina. He is the son of 80s and 90s lucha star El Sanguinario, a star with the Monterrey, Mexico-based promotion Federación Internacional de Lucha Libre (FILL), who also appeared for AAA and CMLL on occasion. He also wrestled as Máscara Sagrada and Máscara Maligna on occasion. Sadly, he passed away in 2002 from a heart attack.

He was a former FILL World Light Heavyweight Champion. Gino Media began training with Booker T, working for his Reality of Wrestling (ROW) out of Houston, Texas, where he’s a former 3x ROW Heavyweight Champion. Medina joined MLW in October of 2019. For the Pure Wrestling side, they’ve countered with Ring of Honor (ROH) Dojo recruit Dante Caballero, a six-year veteran of his native Maryland’s MCW Pro, who joined ROH in 2018 in the Top Prospect tournament. Since then, Caballero has also competed in the 2019 Top Prospect tournament and has appeared on several episodes of ROH TV. Caballero is a former MCW Heavyweight Champion, holding the title for 433-days from 2018 to 2019. 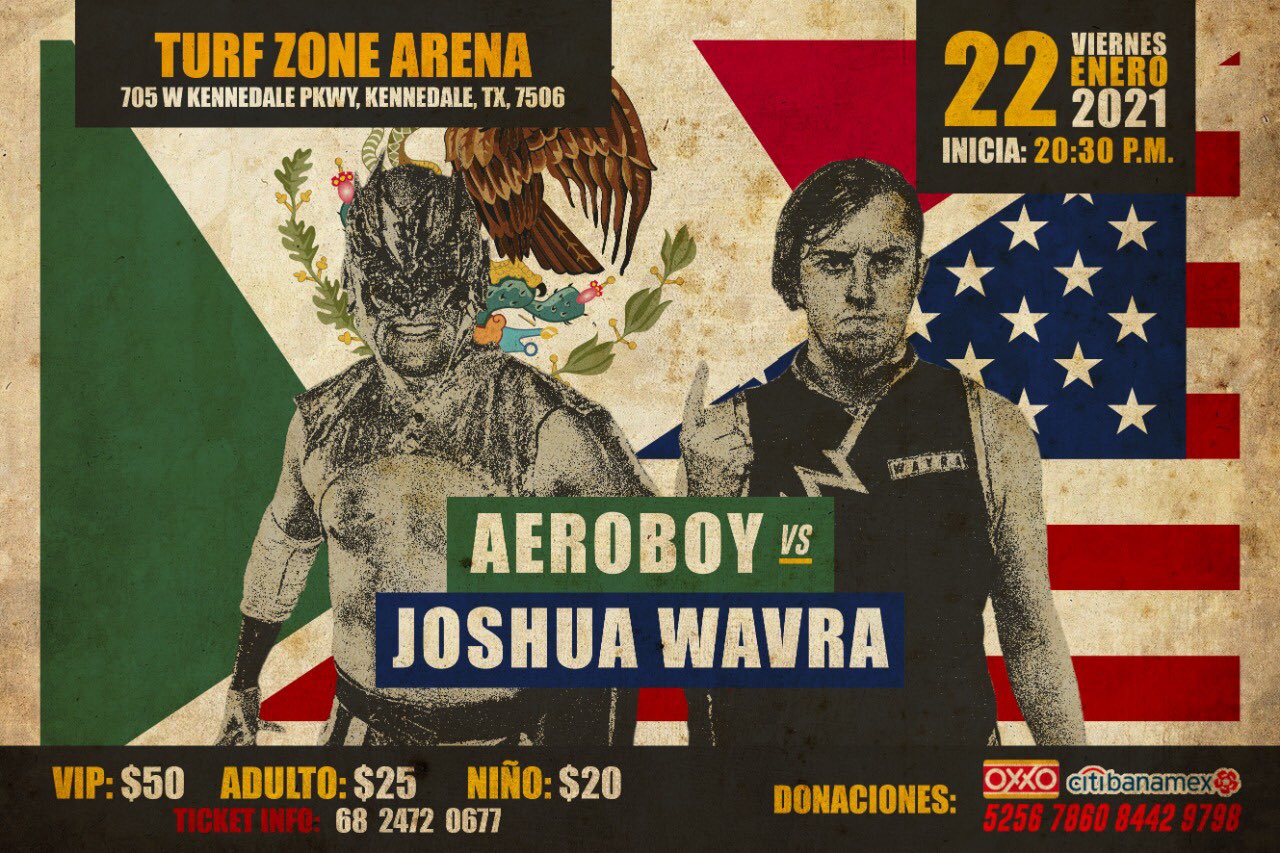 While it’s supposed to be a Lucha vs Pure Wrestling style event, if any match will border on the ultraviolent, it will be this one. Team Lucha’s Aeroboy is a 17-year veteran from Mexico (despite only being 30 years old), having spent a great deal of his career with the violent hardcore promotion Desastre Total Ultraviolento (DTU), where he’s a 3x DTU Extreme Champion and former DTU Alto Pacto Champion.

Even most of his US excursions have been with harder-hitting violent promotions, such as Game Changer Wrestling (GCW), IWA Mid-South, Freelance Wrestling, and others, although he has shown his aerial skills in other top US indies like AAW Pro, Rockstar Pro, and GALLI Lucha. Team Pure is sending in one of the top rising stars in the US indies of 2020 in Joshua Wavra, who has been tremendous in both singles action and as part of the tag team Oreo Speedwagon with Xavier Farady. Wavra has been showing his stuff in the likes of GCW, CHIKARA, Camp Leapfrog, and others, and has been trained by ROH mainstays Jonathan Gresham and Cheeseburger. 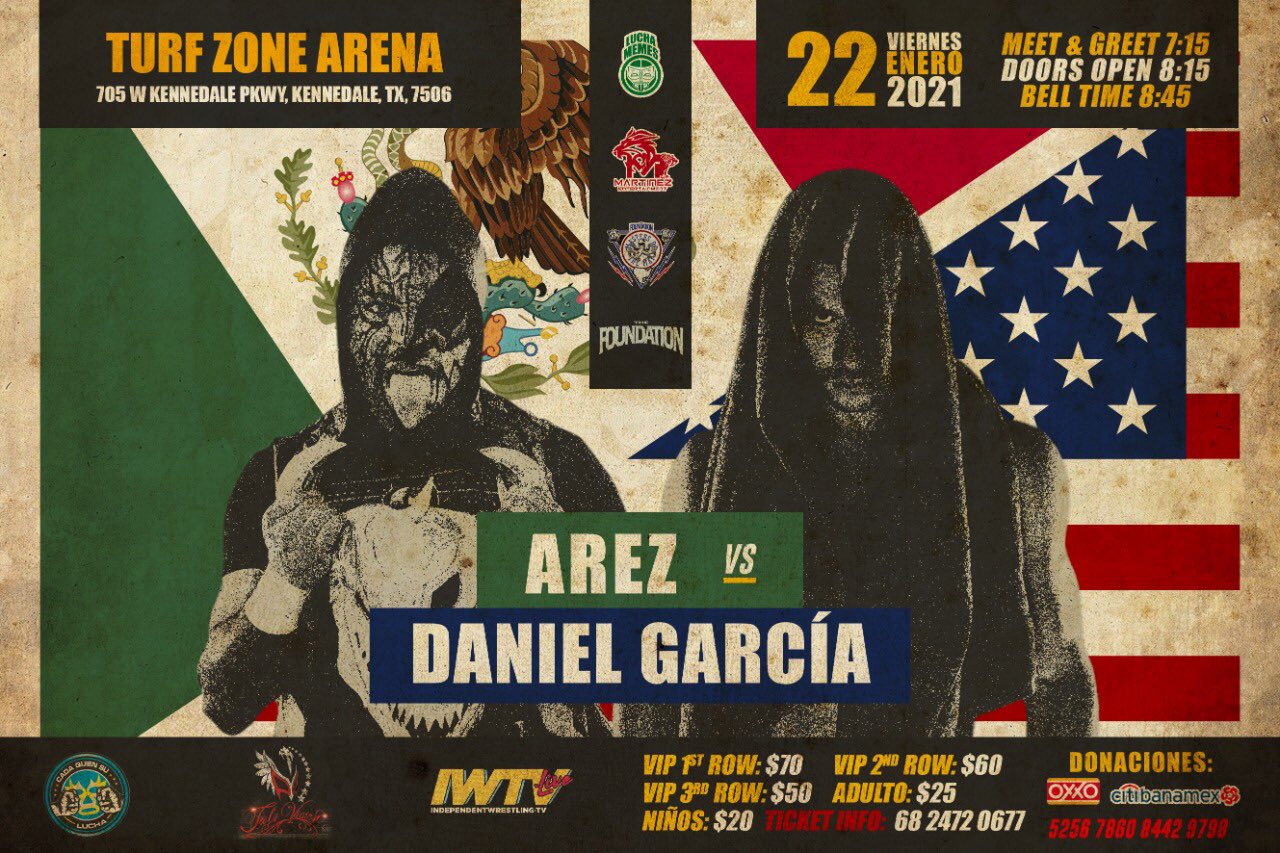 Team Lucha is sending another “young veteran” in 29-year old Arez, a 13-year veteran of lucha libre who was trained under Blue Demon Jr. and Gran Hamada amongst others. Arez has been predominantly a mercenary in dozens of Mexican indie promotions over his career, with the likes of DTU, Lucha Memes, The Crash Lucha, RIOT Wrestling Alliance, and others, but since 2015, he’s also worked multiple shows for AAA Lucha Libre as well. He’s been slowly working himself into the US indies since 2016, having competed for the likes of GCW, Black Label Pro, Combat Zone Wrestling (CZW), GALLI Lucha, and California’s Desert Pro Wrestling (DPW).

Since 2018, he’s also appeared for IMPACT Wrestling when they’ve filmed episodes in Mexico. His opponent from Team Pure is another US indie star who has seen his stock triple in the past year, in Buffalo Brother “Red Death” Daniel Garcia. Initially starting out in Buffalo’s Empire State Wrestling (ESW) and in Southern Ontario’s Canadian indies like Smash Wrestling, Garcia has exploded in promotions like Limitless Wrestling, Beyond Wrestling, ICW No Holds Barred, and others, and even appeared on several episodes of All Elite Wrestling (AEW)‘s YouTube series, AEW DARK, in 2020. 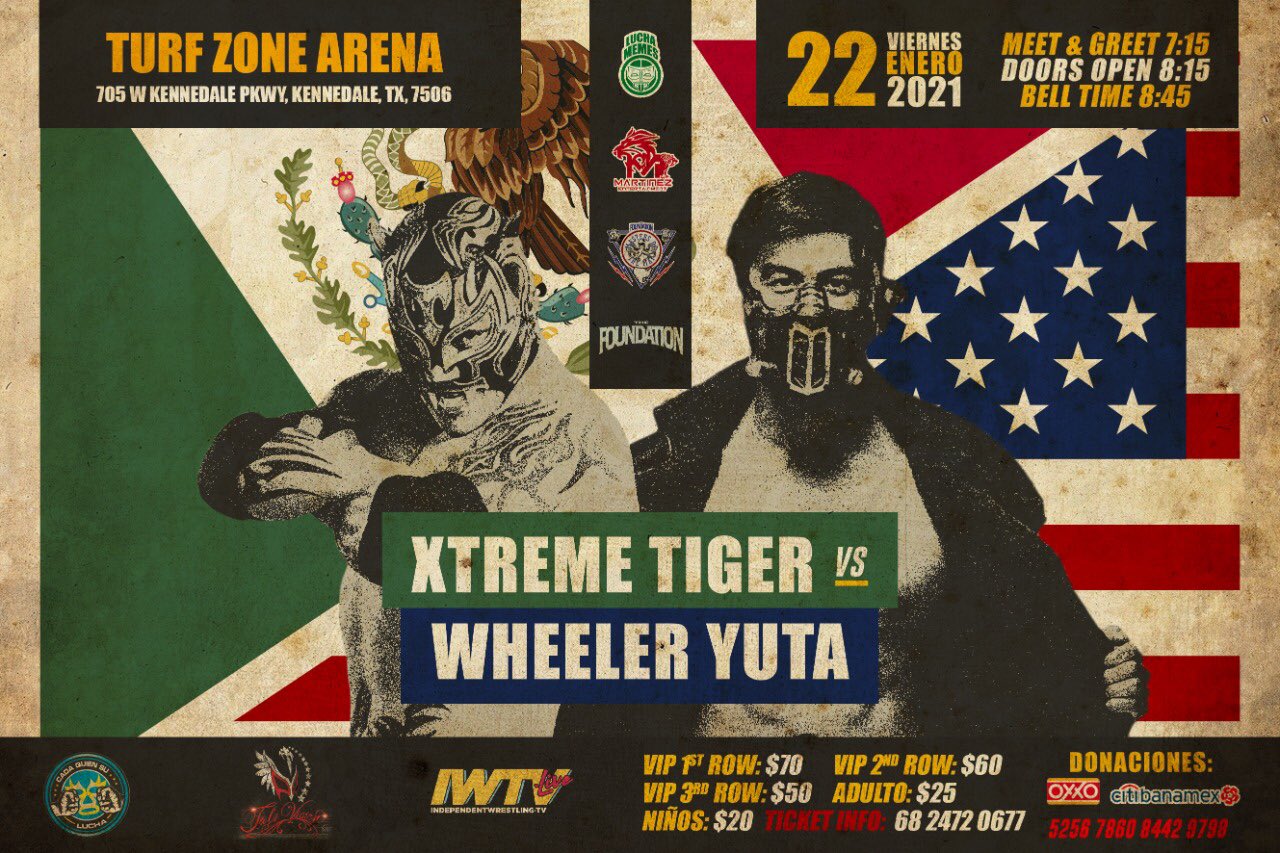 Xtreme Tiger is a 22-year veteran of lucha libre who had an excellent run in AAA Lucha Libre from 2006 through 2012, where he was a 2x AAA World Cruiserweight Champion and 2x AAA World Tag Team Champion. In 2013, he joined TNA/IMPACT Wrestling as Tigre Uno, winning the TNA X-Division Championship in June of 2015 and holding it for 199 days. Since departing TNA in 2016, he’s continued to work around the world, including some shows with AAA and multiple other Mexican promotions, and has even shown up in MLW. Wheeler YUTA is a trainee of WWE Superstar Drew Gulak and has become one of the top US indie stars in the past few years with his incredible work with the likes of Beyond Wrestling, GCW, BLP, MLW, and many others, and in late 2020 was a part of the ROH Pure Title Tournament. 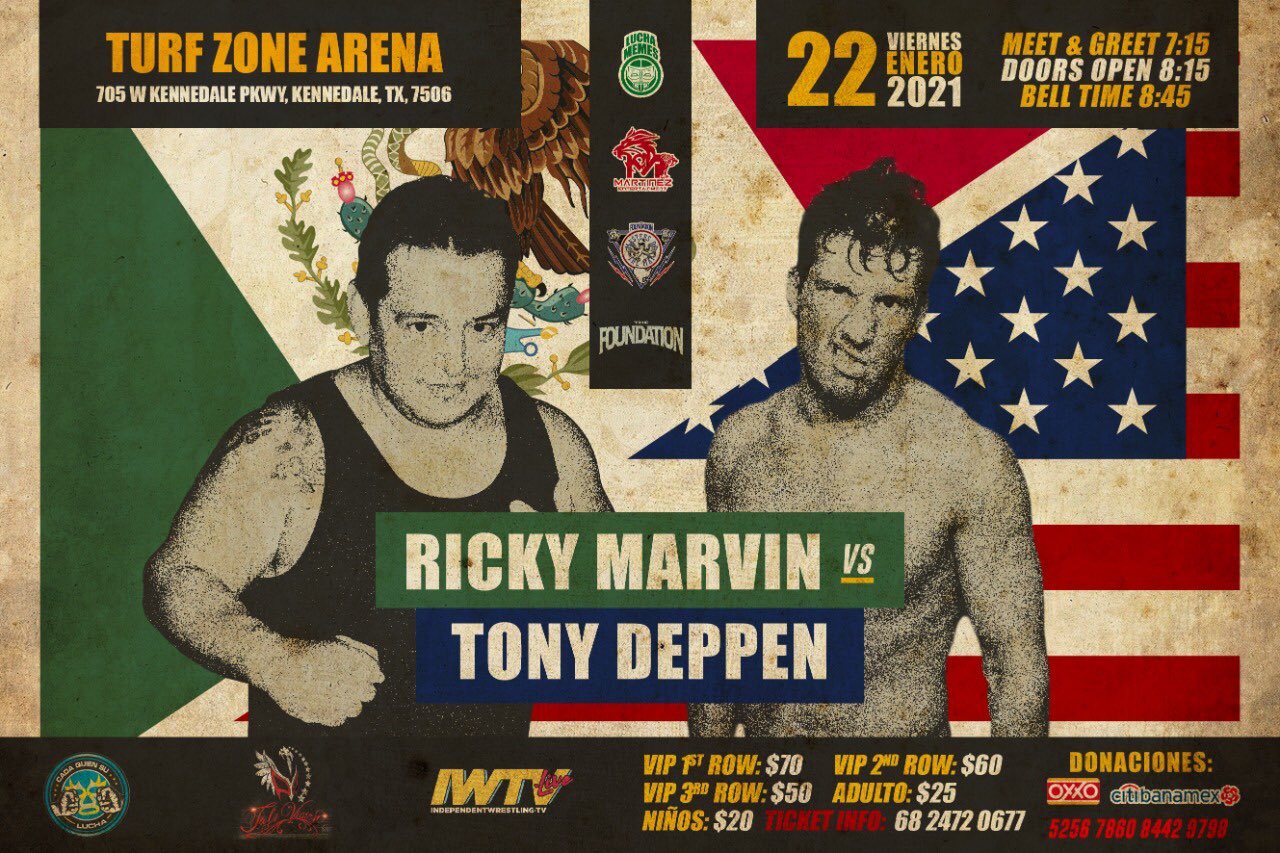 Ricky Marvin has been a top star in Mexico since he debuted in 1995, where he’s competed for AAA, CMLL, and nearly every other Mexican promotion there is. A former Mexican National Lightweight Champion and NWA World Welterweight Champion, he also spent over a decade in Japan with Pro Wrestling NOAH, where he’s a former GHC Junior Heavyweight Champion and 3x GHC Junior Heavyweight Tag Team Champion. Not only was he a strong proponent of the lucha tradition in his native Mexico, but he’s also been a global ambassador and one of its most underrated stars of the past three decades. His work in the US, however, has been limited – he worked a set of ROH tapings in 2013 (where he faced Davey Richards and Roderick Strong in singles matches), and may be best remembered as the character Bengala in Lucha Underground‘s first two seasons.

His opponent on Team Pure is one of the US indies top stars and one of GCW’s gatekeepers in the multi-faceted Tony Deppen. He has been a mainstay with GCW for years now, as well as working for the likes of ICW NHB, CHIKARA, Beyond Wrestling, and others, and he finally made his own ROH debut last fall in the ROH Pure Title tournament. Despite being knocked out in the first round by PJ Black, Deppen has remained with ROH and is now pursuing the ROH World Television title. 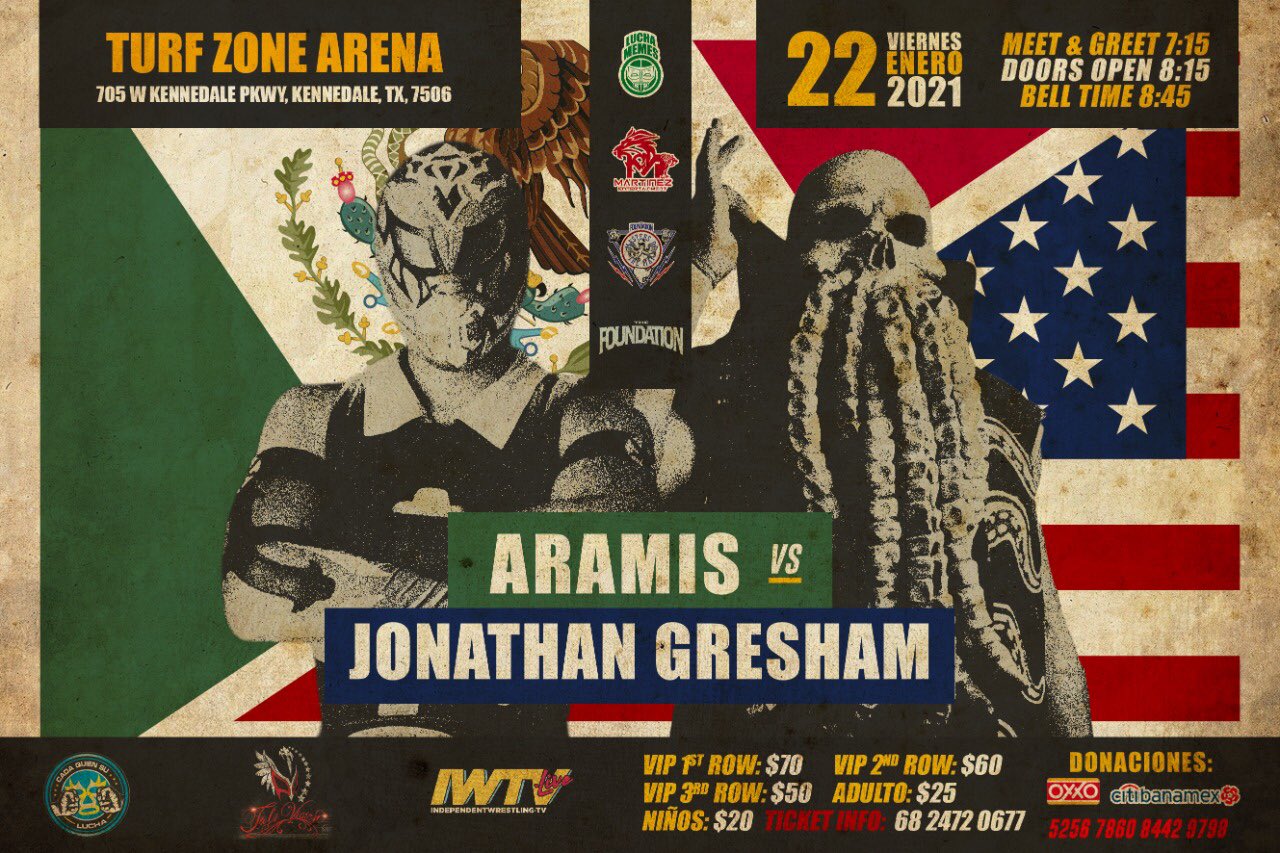 At only 22 years old, Aramis is still a young pup in US wrestling standards – but in Mexico, where the training starts much younger, Aramis has been wrestling for over a decade, starting out with Profesionales de la Lucha Libre Mexicana (PROLLM) in 2009. In 2014, he joined International Wrestling Revolution Group (IWRG), and in 2018, won the IWRG Rey del Aire Championship. But it wasn’t until 2017 he began to make real waves in the Mexican scene, when he debuted with AAA and The Crash Lucha, and then the following year appeared on IMPACT Wrestling during their Mexico tapings.

He made his US debut in September of 2019 as an entrant in Pro Wrestling Guerrilla‘s 2019 Battle of Los Angeles, but despite losing in the first round to Rey Fenix, he made an impression. Since then, he’s also appeared for AAW Pro, Warrior Wrestling, GALLI Lucha, and a return to PWG. The high flying youngster is set to take on the undisputed king of Pure Wrestling, leader of Team Pure, and the current reigning ROH Pure Champion Jonathan Gresham. Gresham has been an ROH staple for years and was instrumental in the return of not just Pure wrestling to ROH, but the return of the Pure Championship. This will be the ultimate test of lucha libre vs. Pure Wrestling in Lucha Memes.