The Opera Cup rolls on in this week’s episode of MLW FUSION! Former MLW World Heavyweight Champion Low Ki secured his spot in the finals. This week, we find out his opponent in a match between Tom Lawlor and ACH. We also have the highly anticipated return of MLW National Openweight Champion Alex Hammerstone. CONTRA Unit’s Mads Krugger is also in action against two yet to be named opponents. With all of that being said, let’s dive into the action! 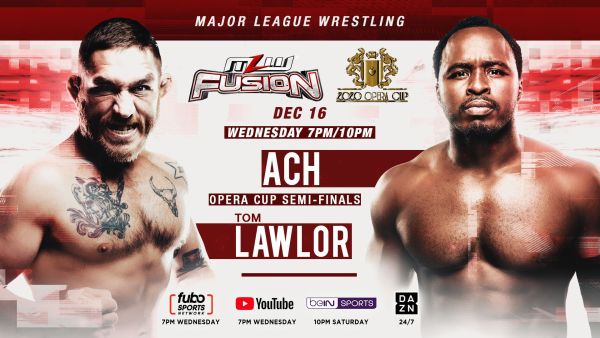 Former MLW World Heavyweight Champion Tom Lawlor looks to keep his momentum moving against the also surging ACH. Both men had stellar performances against Rocky Romero and Laredo Kid, respectively; both also have to be mindful that former MLW Champion Low Ki is waiting in the finals for them. I do see “Filthy” moving onto the final round, but expect both men to deliver a fun and brutal match.

Here is a full rundown of what’s to come on this week’s edition of MLW FUSION: