During Friday night’s final for New Japan Pro Wrestling‘s Best of the Super Juniors 27, eventual winner Hiromu Takahashi ripped away at the mask of his opponent, Suzuki-gun‘s El Desperado. With his mask in ruins, El Desperado did what few masked men have done in the history of the sport – instead of trying to regroup and fix his mask to protect his identity, he voluntarily ripped it off himself. In doing so, he revealed a face that has a great history with Hiromu Takahashi – the man formerly known as Kyosuke Mikami. 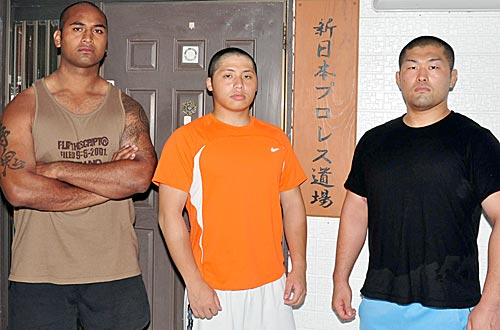 Kyosuke Mikami attended a tryout at the NJPW Dojo in 2009 and was accepted as part of that year’s class of new Young Lions. His class included Bad Luck Fale as well as another young technician named Hiromu Takahashi. After nearly a year of intense training, Mikami would make his live debut with NJPW in March of 2010 at NJPW’s 38th Anniversary event, losing to Ryusuke Taguchi. Mikami was a highly touted prospect from the Dojo. He made his debut a month before Fale and several months before Takahashi. Mikami was used in various roles, as a singles wrestler as well as in tag team and 6-man tag matches, but like most Young Lions, he had to earn his stripes. He would lose his first 31 appearances for New Japan. But all of that changed on August 24, 2010, at NJPW NEVER 1, when he won his first match against fellow Young Lion Hiromu Takahashi in the latter’s New Japan debut.

The two would fight multiple times throughout the rest of the year, with Mikami going a perfect 10-0 against his Young Lion classmate. But they weren’t rivals out of hatred for one another – the two classmates were also frequent tag team partners throughout 2011. The team would even represent NJPW in DDT Pro in December 2011, picking up a win over DDT’s Soma Takao & Toru Sugiura. The two would have their final singles match against each other at NJPW’s Road to Kingdom 1st over the Christmas holidays (another Mikami win), and soon after Wrestle Kingdom VI in 2012, Mikami was removed from television due to “injuries”. But in reality, Mikami was getting ready for his New Japan excursion, the Young Lions rite of passage that sends them to other territories around the world to continue their training. For Mikami, that meant he was going to Mexico where he would train with Consejo Mundial de Lucha Libre (CMLL).

In Mexico, Mikami became known as Namajague, where he teamed with Okumura, a veteran from All Japan Pro Wrestling (AJPW), who had relocated to Mexico and work with CMLL in 2004. Together as La Fiebre Amarilla, the duo would capture the CMLL Arena Coliseo Tag Team Championships in 2013 and hold them for 245 days. As Namajague, he would work with CMLL until the end of 2013, when he was finally recalled back to Japan by NJPW. Vignettes for a new mysterious masked character arriving from Mexico, dubbed El Desperado, began airing on New Japan television throughout December of 2013, leading to his arrival – now under his famous mask – at Wrestle Kingdom 8, where he came down to the ring to give Kota Ibushi – who had just won the IWGP Junior Heavyweight title – a bouquet of roses. New Japan never revealed that Desperado was actually a returning Mikami. Instead, they claimed he was from Mexico and was bi-racial – he had a Japanese father, which is why he could speak such fluent Japanese.

El Desperado would face Ibushi for the IWGP Junior Heavyweight title at NJPW A New Beginning in Osaka that February, but lost. However, just as Desperado was making his new name in New Japan, his former Young Lion classmate was heading on his own excursion, as Hiromu Takahashi would head to CMLL himself at the end of 2013. Ironically, Takahashi would put on a mask at the same time as Mikami – upon arrival in CMLL, Takahashi became the masked man known as Kamaitachi – and he replaced Mikami’s Namajague as the new partner for Okumura in La Fiebre Amarilla. Takahashi would remain with CMLL until early 2016, and following a brief run in Ring of Honor, was recalled to New Japan, where he debuted at NJPW Power Struggle. Much like Desperado’s debut, he interrupted KUSHIDA‘s celebration of winning the IWGP Junior Heavyweight title, challenging him to a title match at Wrestle Kingdom 11 in early 2017.

While Takahashi was re-debuting with New Japan, El Desperado had since joined Minoru Suzuki in Suzuki-gun and joined the group in their “invasion” of Pro Wrestling NOAH. During the two year stint in NOAH, alongside teammate TAKA Michinoku, Desperado captured the GHC Junior Heavyweight Tag Team titles. Their exile in NOAH came to an end in early 2017, when Suzuki-gun returned to NJPW on January 5 at New Year Dash, attacking both teams in an 8-man tag match between CHAOS and Team NJPW. Despite their vicious return, the night before at Wrestle Kingdom 11, Desperado was upstaged by his former teammate – Hiromu Takahashi defeated KUSHIDA to win the IWGP Junior Heavyweight Championship.

Suzuki-Gun are back and out for blood!!! The New Year's off to a brutal start! pic.twitter.com/JqhePqMO2y

While the two former classmates would face each other in multiple tag team or 6-man matches after Hiromu’s return, it wouldn’t be until May of 2018 that they would finally face off in singles action, as part of the Best of the Super Juniors 25 Block B action. Shockingly, El Desperado scored the upset victory over the former IWGP Junior Heavyweight Champion (Hiromu would go on to win the BOTSJ tournament despite this loss, and re-captured the Junior Heavyweight title a month later). Thanks in part to his victory in the tournament, Desperado was finally given a chance to unthrone Takahashi at NJPW Kizuna Road in June of 2018, but Takahashi finally bested his old classmate and defended his title. It would be the final singles match between the two until this year’s Best of the Super Juniors 27.

El Desperado looked more determined than ever, and in early-round action, he defeated Hiromu Takahashi once again. But Hiromu kept astride with Desperado throughout the tournament, and on Friday, December 11, the two met in the finals. Following a harrowing but exciting final match, Desperado finally revealed to Hiromu the man behind the mask. The man who debuted first in New Japan, he went to CMLL first, who got his main roster push first, but yet, the man who had failed to do the one thing Hiromu had managed to accomplish not once, but three times – win the IWGP Junior Heavyweight Championship. Now a man possessed, Desperado – the man formerly known as Takahashi’s Young Lions classmate and tag team partner Kyosuke Mikami – is now more driven than ever to stake his own individual legacy in New Japan… And hopefully at his former friend’s expense.