Following on from the brand receiving their first-ever five star rated match from Dave Meltzer in the form of that sensational WALTER vs. Ilja Dragunov main event last week, NXT UK looks to capitalise on that momentum, as the semifinals of the Heritage Cup Tournament kicks off.

The first of two semifinals for the NXT UK Heritage Cup Tournament will see Noam Dar battling A-Kid, which comes after their first round victories over Alexander Wolfe and Flash Morgan Webster respectively. Both men had very different routes towards the semifinals, with ‘The Scottish Supernova’ having a bit of help over Wolfe from the match’s special guest referee Pete Dunne, while the Spanish native won a hard-fought contest against a former NXT UK Tag Team Champion. Whoever wins here will face either Dave Mastiff or Trent Seven in the finals to determine the inaugural holder of the NXT UK Heritage Cup, a title that could be exactly what’s required for either Dar or Kid to officially cement their legacy within the NXT UK history books. 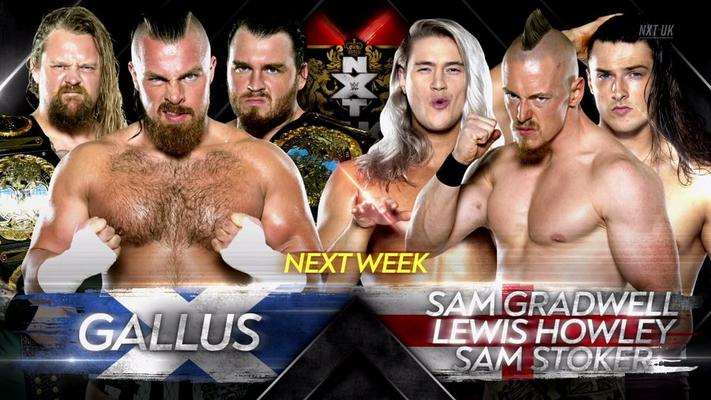 Gallus is back in full form once more, as Joe Coffey returns to the brand to rejoin forces with the reigning Tag Team Champions, Mark Coffey and Wolfgang. The trio’s first match back together seems them battling the oddball team of Sam Gradwell and Pretty Deadly (Sam Stoker and Lewis Howley), the three joining forces after Pretty Deadly were seemingly kicked to the kerb by Eddie Dennis and replaced by The Hunt (The Primate and Wild Boar). With ‘The Power Forward’ and ‘The Regulator’ as the reigning NXT UK Tag Team Champions, a victory for Gradwell, Stoker, and Howley could very easily put Pretty Deadly in line for a future title opportunity against the Gallus boys. What’s quite interesting here is that this is actually the first time Sam Gradwell has wrestled since September 2018, where he entered Grand Pro Wrestling‘s (GPW) Thunderbrawl Rumble Match. It’s a tough test coming back opposite Gallus, but it could do wonders for his tag partners at least if they come out victorious.

THE HUNT has arrived on #NXTUK!

And this is a BETRAYAL!@EddieDennis1986, what have you done?!?!? pic.twitter.com/k6i1noXx2t

The Hunt Is On

As just mentioned, Eddie Dennis seemingly ditched his alliance with Pretty Deadly last week. After being confronted by South Wales Subculture (Mark Andrews and Flash Morgan Webster), the man they thought was behind the mystery ambush of Webster a few weeks prior, ‘The Pride of Wales’ instead showed his allegiance to The Hunt. The Primate and Wild Boar looked to be coming to the aid of the former NXT UK Tag Team Champions to combat Dennis, Stoker, and Howley, before instead laying them out. Rather than Dennis being the leader of this supergroup of both The Hunt and Pretty Deadly, it appears he’s only aligned with the former, which is a massive shame as Stoker and Howley – no disrespect to their own talent – could have used someone like Dennis to guide them to the titles. Regardless, the alliance of Eddie and The Hunt is no doubt one that will be ruthless for some time to come.

A shock vignette from last week’s NXT UK confirmed the imminent arrival of British wrestling icon, Rampage Brown, with the Leeds native finally getting that big break he’s been deserving of for years. Technically speaking, this isn’t the first big moment for Brown, as he’s previously appeared for WWE back in the Florida Championship Wrestling (FCW) days for a brief spell, he was part of IMPACT Wrestling‘s British Boot Camp, and he was also the World of Sport Wrestling (WOS) Champion, so he does have experience working in front of a TV audience. The sheer outpouring of support for Rampage when the announcement was made just goes to show how many people, fans and wrestlers alike, respect and admire the work done by Rampage to improve the British wrestling scene in his near two decades in the business. With WALTER surprisingly retaining the NXT UK Championship last week, perhaps Rampage Brown is the man to dethrone him.

The self-proclaimed TRUE Cruiserweight Champion is victorious on #NXTUK and has laid down a challenge! pic.twitter.com/NGxCf5U421

Jordan Devlin made a successful return to NXT UK last week, as the real NXT Cruiserweight Champion made easy work of Levi Muir, before issuing a challenge to any and all cruiserweights. ‘The Irish Ace’ is still fuming that Santos Escobar continues to parade around as the Cruiserweight Champion, a reign that initially began as him being deemed the interim champion. Whether they have a title unification bout further down the line remains to be seen, however, this challenge could certainly be interesting, particularly if WWE make use of it as a Devlin vs. the cruiserweight division angle with numerous open challenges until Escobar finally answers.