In the 2020 WWE Draft, the unthinkable finally happened. The New Day was separated. Kofi Kingston and Xavier Woods, holding the SmackDown Tag Team Championships at the time, were drafted to Raw while SmackDown selected Big E. And while they didn’t break up or anything, the next time the trio will be all together on TV is a real question mark. It was the end of an era in WWE as the three men will no longer spread the “Power of Positivity” together but instead apart on WWE’s two trademark shows. The first time being truly apart since July 21, 2014, when they first came together on television. It was a 6+ year journey for the trio that is unmatchable in WWE history.

That means there is no better time to explore the greatness of what The New Day did together through all the ups and downs. Rejection, “New Day S*cks,” and a gimmick that took three incredibly talented men to make it work. Positivity shines through and made them one of, if not the, best groups in the history of WWE. This is a journey back to the timeless legacy of The New Day.

An Uphill Battle From The Start 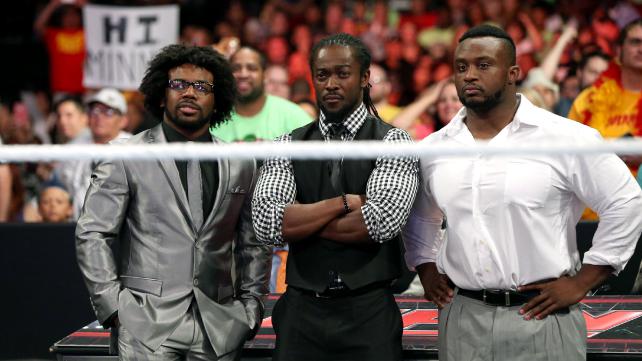 If you have any of the three men talk about their beginnings together, the singing preacher gimmick was not the one they had hoped for. They wanted a new path for them, as Xavier Woods was not on TV at all, Big E was floundering after a poor Intercontinental Championship run and Kofi Kingston was lost in the midcard with no direction after five-plus years. Xavier Woods had an idea to all come together and put his job on the line that he could make the fans boo Kofi Kingston.

While the gimmick was not what they hoped at the start, they did their best to make the thing work because they believed in one another. The “Power of Positivity” was seen as something by the fans as boring and ridiculous on many occasions. Somehow, they managed to make it work, becoming heel in the process and using that to get themselves over.

A lot of the time early on, The New Day was answered with boos and no reaction. Eventually, they earned themselves a tag team title match and won them at Extreme Rules 2015. Many questioned the move then, but soon enough The New Day earned the love of the WWE fans and turned the tide, becoming fan-favorites despite their heel nature and continuous ability to steal wins. 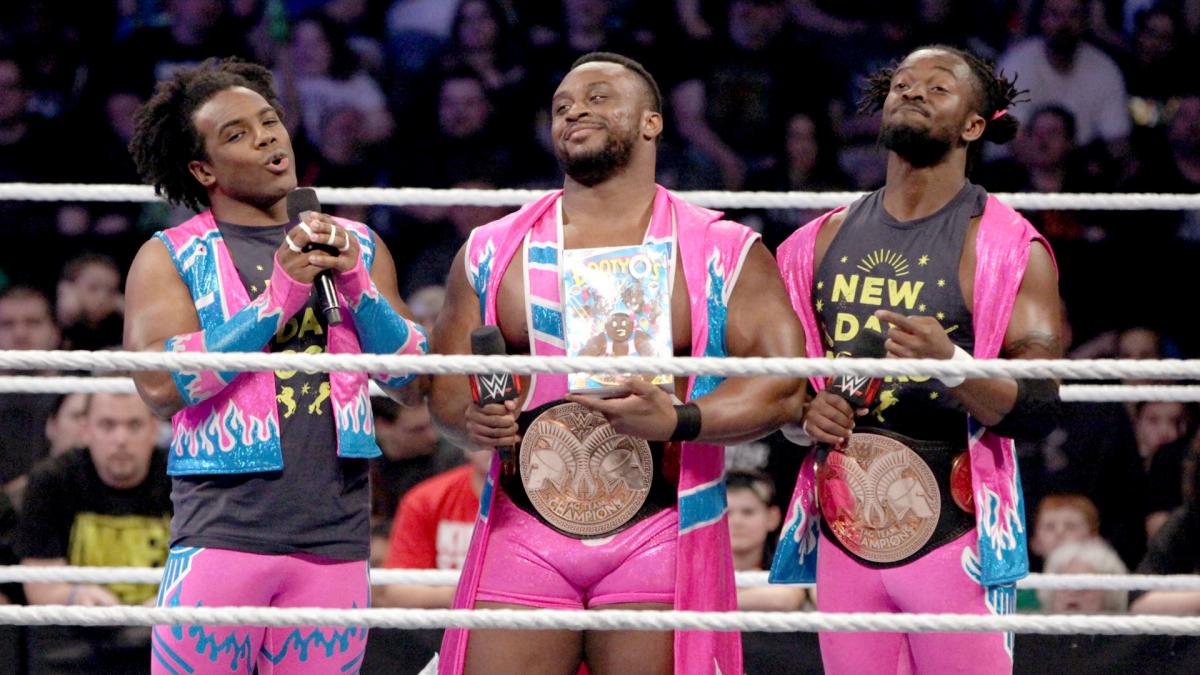 When you have three incredible talents doing everything they can to make something work, it will eventually pay off in pro wrestling. It’s a format that has been followed and executed for a long time, and if they are able to find success then they can recreate the image they had hoped for and start to use that. The New Day is a pure success story. They weren’t supposed to work but instead became historic in WWE. As they held tag team gold, they became more and more entertaining, soon becoming WWE’s most popular act in 2015 and on. “New Day S*cks” soon became the perfect battle cry and “New Day Rocks” was leaving people’s mouths. The bright colors, cheating, and fantastic reintroduction of the “Freebird Rule” became locks for The New Day and everyone loved it. More impressive is one year prior, they wanted nothing to do with it. 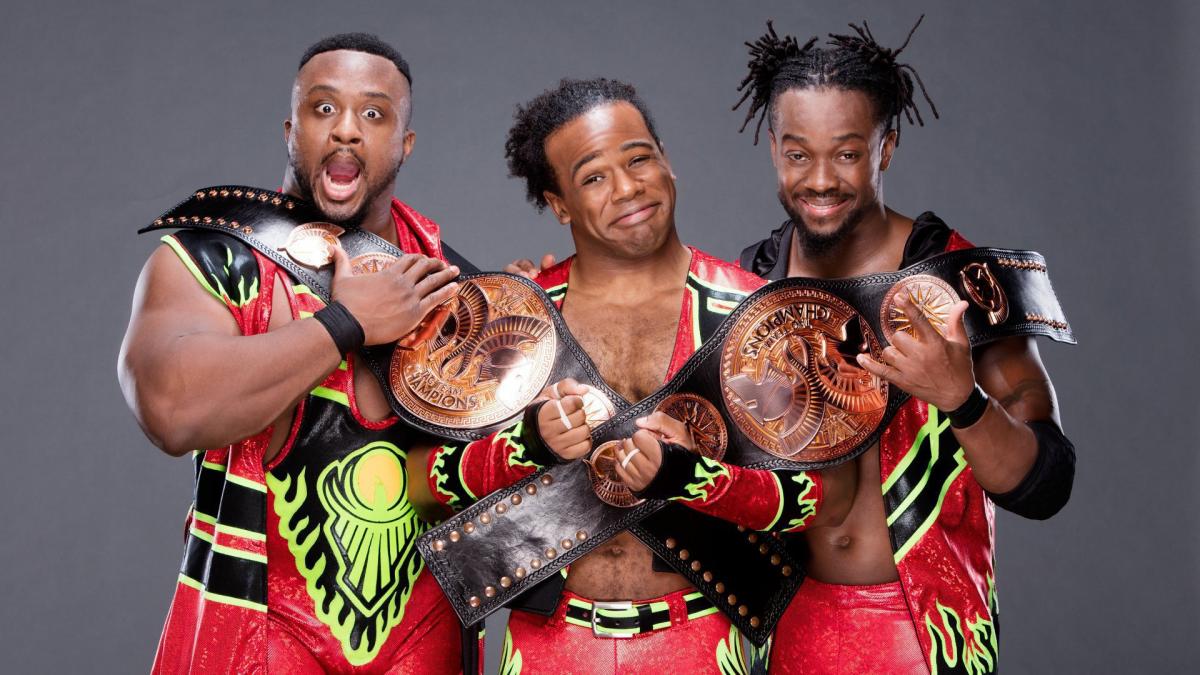 A record-breaking tag team. That’s a fact when it comes to The New Day. They are 9-time champions together, but no more impressive than their second run with the WWE Tag Team Championships. Before there was a brand split, The New Day reigned supreme over all the tag teams in WWE for an all-time record of 454 days. That bested the near three-decade record held by Demolition during 1989. It was an achievement like no other and one that guarantees they are never forgotten. Something of absolute impressiveness considering where they were on the card two years earlier. 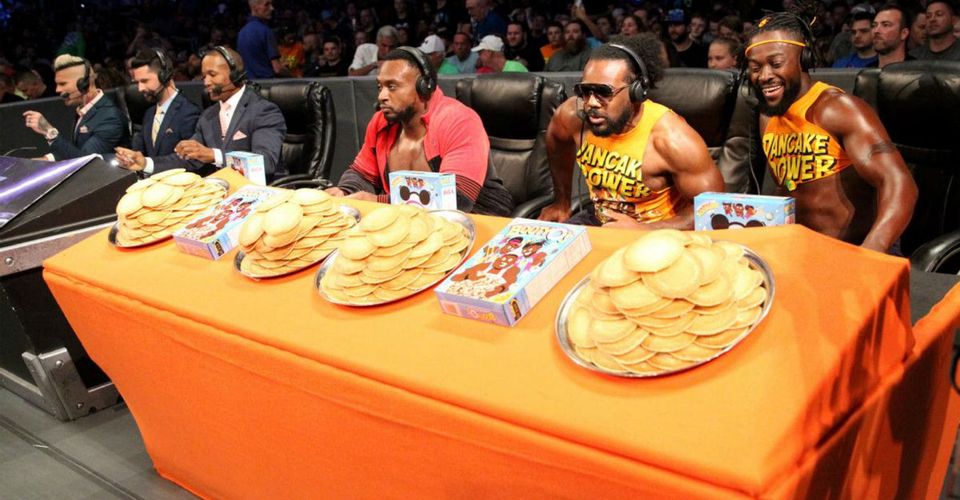 No one in WWE history made more random props work in their schtick more than The New Day. Booty-O’s cereal — “they make sure you ain’t booty.” Flipping pancakes through the air into the WWE Universe like it was no one’s business. The repeated ability to cosplay in a number of their entrances. Making the unicorn their official logo as they wore unicorn horns that lit up down to the ring which also happened to be one of the best sellers on WWE Shop. And of course, using the “Power of Positivity” all the way until their last day. The only thing they really remained connected to from their original incarnation, making it all the more impressive for them. It’s impressive because carrying that idea for over six years together is simply masterful by the group. 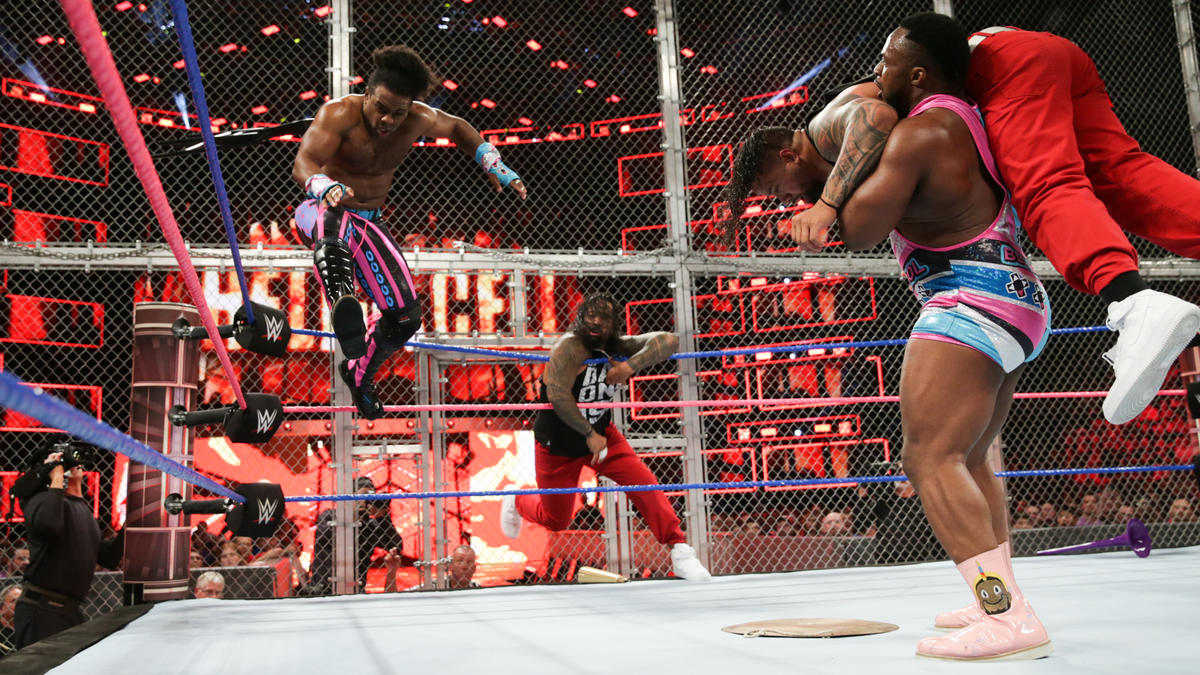 Success can come in all forms, but without superb in-ring performance, it isn’t always appreciated. Luckily enough for the fans at home and arenas on any night, The New Day performed in the highest of forms night in and night out. It would be wrongful to not applaud their rivalry with The Usos first as it dominated SmackDown LIVE when the draft came around and led to some of the best tag team matches in WWE history. One match that they credited in their farewell was the Hell in a Cell match vs. The Usos that saw all four men involved go through literal hell to win the SmackDown Tag Team Championships. They were the masters of innovation at times in that one and stole the show. We can name so many more nights as well where they and The Usos stole the show and rightfully so.

More matches that saw their greatness include their Survivor Series bout against The Shield in a real dream match, the match that saw them win their first titles together against Cesaro and Tyson Kidd, and a number of matches against The Revival. The final recognition when it came to incredible matches for the group has to be against The Bar. Cesaro and Sheamus came together and proved to be the team that could beat Big E, Woods, and Kingston and ended that record run. It was another match made where they couldn’t have a bad match. They even fought them in The New Day’s final match together (for now) on SmackDown. Had The Usos been able to be together, then it only would have been better. Their in-ring ability is what helped them stay on top for so incredibly long.

#KofiMania: Kofi Kingston Wins The WWE Championship At WrestleMania With His Brothers By His Side 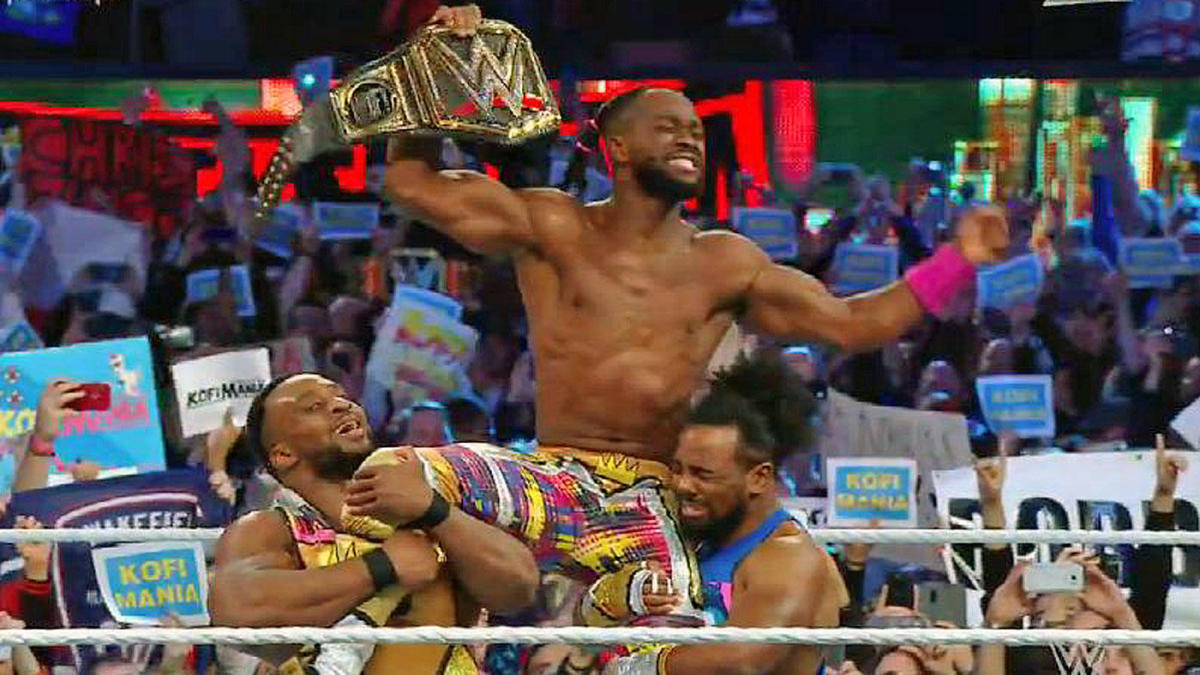 There is no more real moment, more important moment, and no bigger moment in the past five years of WWE than Kofi Kingston winning the WWE Championship at WrestleMania 35. The joy and tears running down both Big E and Xavier Woods’ face told you how much that meant to them. For so long, Woods explained in interviews that his goal in WWE was to see Kingston win the WWE Championship. Big E only relayed that notion, but there was never a time where that was close to being a reality. In 2019, a lot changed as injuries happened, allowing Kington to rise through performance after performance that put it in the hands of the WWE Universe to get him there.

#KofiMania became a trend on Twitter for good reason and it was powered through his friends. There may have been a no more beautiful moment in the history of The New Day, not counting the Mania moment, than when Big E and Woods survived the gauntlet to earn Kingston his opportunity at WrestleMania. Forever, this was a group effort and their No. 1 goal together. And Kingston’s win was special for a reason. As Big E has said in an interview, you don’t see African Americans hold the world championship in that company every day. Especially the WWE Championship, as the only man of African American descent to hold the championship was The Rock. The New Day was about bringing change and shining through. There was no bigger moment of that happening than at WrestleMania 35. Their greatest achievement.

The Final Move: Letting Big E Run On His Own In Singles 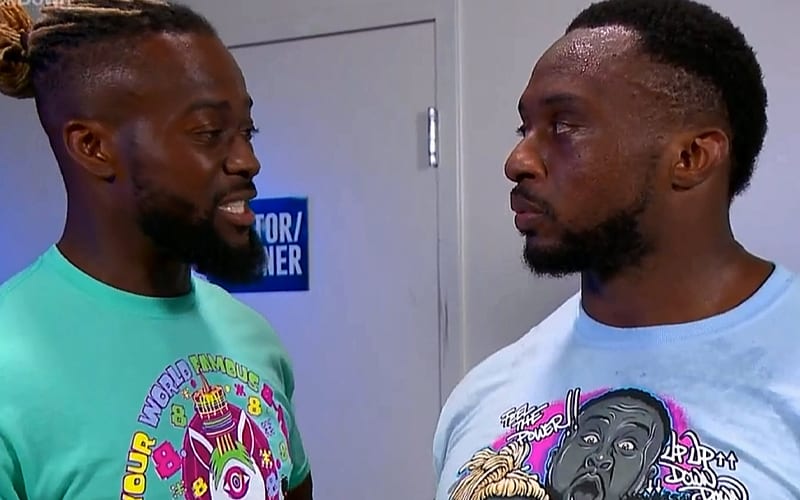 The New Day always had each other’s back. And that meant doing what they felt was been for one another. See Kofi’s rise to the main event as the finest example. Or the continuous nod to Xavier Woods’ UpUpDownDown YouTube channel on their gear and in promos. It was a brotherhood where they’d do anything to help others succeed. And through those six years, Big E sat back and let them shine. He asked for nothing but this chance, because as he said before — he doesn’t think he would have a career doing this anymore without them. So to him, everything was absolutely worth it and he made friends for life. But in the summer of 2020, that all changed when Kofi Kingston had to leave for a period of time, and Woods reminded sidelined with his Achilles injury.

He told Big E it was time for him to pursue singles action. And that story has yet to complete, but we know that the ceiling for Big E is the biggest babyface world champion the company has seen in a long time. He has the mic skills, the in-ring talent, and the oozing charisma that any real main eventer needs. It’s been something fans have wanted for years at this point. One has to believe that those two really did discuss it because of how much Big E means to them. He flourished in his opportunity, having a fantastic feud with Sheamus resulting in that final Falls Count Anywhere match on the draft episode of SmackDown. It was their final move as a group really, and one that should see Big E only rise higher on his own.

Greatness is difficult to find in professional wrestling circa 2020. Too much is fabricated, critiqued, and compared to the past. Other things are replaced by the past, especially when it comes to WWE. But sometimes, even in the biggest company in the world, those diamonds can shine through and be the best thing going. And for six long years, The New Day proved to be that time and time again. As champions, as supporters of one another, and as the leaders of “Positivity” and the power it brings. Believing in yourself is one thing, but two other individuals is another. They helped bring change to a company that needed change. They kept tag team wrestling afloat and perhaps gave it the most life it had seen since the 2000s when it comes to that company.

There are dream matches these three should be involved in because they are that good. The New Day has left a lasting legacy that will never be forgotten in professional wrestling because of what they did accomplish. What they stand for to this very day. All the championships, all the moments, all the positivity. None of it will be forgotten, but instead remembered forever. They will be WWE Hall of Famers, and truthfully they should be as both a group and as singles. “Powerful Positivity” is real. It’s what The New Day’s legacy is because they were that great together and will continue to be that great apart.

Forever FEEL THE POWER. It’s a New Day, oh, yes it is.