The New Day will undoubtedly go down as one of the most successful factions in WWE and professional wrestling history. With a total of nine Tag Team Championships, including a record-breaking reign of 483 days, the trio of Xavier Woods, Big E, and Kofi Kingston has been incredibly successful. It seemed like little could get their way. That was, until this past week on Friday Night SmackDown, which marked the beginning of the WWE Draft. On that night, The New Day, or rather the form as fans knew it, was no more.

Last week’s episode of SmackDown should have been a night of celebration. Earlier in the show, Big E defeated his rival, Sheamus, in a Falls Out Anywhere Match. More importantly, however, the returning Xavier Woods and Kofi Kingston overcame Cesaro and Shinsuke Nakamura for the SmackDown Tag Team Championship. Everything looked to be coming up roses for The New Day. Shortly after the latter victory, Stephanie McMahon appeared to announce the latest wave of draft picks. She declared that the new titleholders, Woods and Kingston, would be bound for Monday Night RAW. “Say E’s name,” demanded Woods as the mood in the ThunderDome changed. Regretfully, McMahon announced that Big E would be remaining on SmackDown. What should have been a night of jubilation became a somber moment for the often upbeat trio. 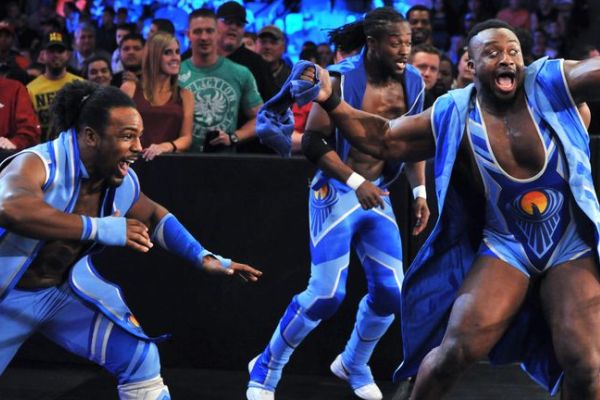 A Look Back at The New Day

It’s difficult to frame The New Day’s success without looking into the past. Rewind to the summer of 2014; things weren’t looking so positive for Woods, Big E, and Kingston. At this point, Kingston established himself as a reliable midcard star, holding the United States and Intercontinental Championships on numerous occasions, but not much higher than that. Meanwhile, as singles stars, Woods and Big E struggled. Big E saw some success, including runs with the NXT and Intercontinental Championships, but his star fizzled on the main roster. Meanwhile, Woods wasn’t given much of an opportunity to emerge from the starting gate. Simply put, The New Day was a critical opportunity. If this failed, who knew what the future held for these three men?

The following November, the group emerged as a trio of energetic gospel preachers. As babyfaces, they picked up victories and even faced the team of Cesaro and Tyson Kidd at the 2015 Royal Rumble event. However, as time went on, crowds began to turn on the babyface group. “New Day Sucks,” crowds would chant from venue to venue, despite being portrayed as heroic figures. Clearly, this experiment wasn’t panning out. Instead of the group disbanding, however, it took a different direction. This time, the gospel aspect would be downplayed and their good guy personalities should be shed in favor of mischief and obnoxious behavior alike. 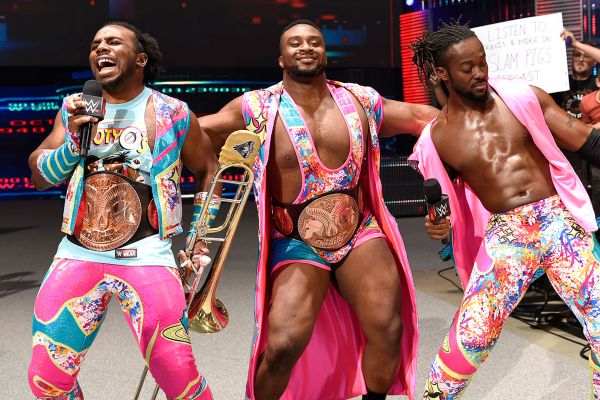 Upon making the change in question, The New Day enjoyed a surge of momentum. Before long, they were WWE Tag Team Champions, an accolade they would routinely boast in their live entrances. Just as importantly, however, their charisma was undeniable. Whether it was Woods playing the trombone, affectionately known as Francesca, or the three men threatening to fight the fans’ children, they seemed to know how to make anything work. Due to a combination of quality matches and the charisma in question, fan perception transformed. Slowly, chants of “New Day Sucks” became “New Day Rocks.”

Though The New Day, up until this point, spend most of its time as a heel faction, it was as a group of babyfaces that yielded the most success. This transcended Tag Team Championships, too. Their merchandising was unreal, to say the least. The New Day was so popular that WWE sold breakfast cereal based on their collective likeness. Fans would attend shows wearing t-shirts and even glowing unicorn headbands. All the while, The New Day remained a fixture in WWE’s tag team scene throughout the years. They put on classic matches with teams including Karl Anderson and Luke Gallows, The Revival, and perhaps their greatest rivals, The Usos. 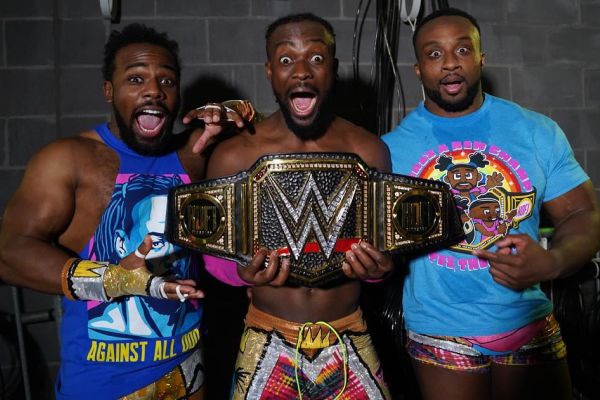 Support of a Brotherhood

The New Day’s support for one another surpassed tag team wrestling, too. During the beginning of 2019, Kingston began to vie for the WWE Championship, the one title that eluded him throughout his career. Knowing the weight of said opportunity, and through a desire to help their brother in arms, Woods and Big E supported him each step of the way, no matter how daunting the roadblocks seemed. When Kingston finally overcame Daniel Bryan at WrestleMania 35, winning the WWE Championship, his New Day brothers were just as elated as he was. In most scenarios, one teammate seeing singles success would breed jealousy. For The New Day, it bred unyielding camaraderie.

It goes without saying that The New Day has been through highs and lows. Fans have been witness to these, watching the group not only struggle but attain monumental victories. We watched them emerge from a giant cereal box, utilize a makeshift time machine, and seize championship gold on both brands. Thus, the idea of The New Day splitting seemed impossible. To say that it elicited strong emotions from fans would be an understatement. At this point, it’s difficult to see why it was done to begin with. 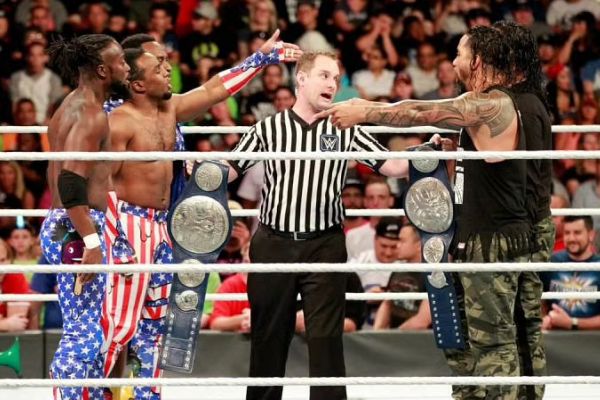 Arguing Against the Split

For all that WWE has done right in the past few years, one area where the company has struggled was tag team wrestling. There is talent within the division, but it isn’t given nearly the time it should. On many pay-per-views, Tag Team Championships are either relegated to kickoff shows or are simply absent. Furthermore, there aren’t very many teams that fans can see as viable contenders. Outside of the two sets of champions, the team of Woods and Kingston and The Street Profits, there aren’t many solid male duos. One would think that a division featuring the likes of Lucha House Party and Cesaro and Nakamura would be more robust, but this simply isn’t the case.

In theory, The New Day trio would be a staple of the tag team division through thick and thin. They are just as capable of fighting lower on the card as they are pursuing championship gold. Additionally, as they were a three-man group, they could use different combinations to create unique match-ups. Big E, for example, would provide a power advantage whenever he wrestled. As a high-flyer, Woods has agility on his side. As the most experienced of the bunch, Kingston would be more resourceful and crafty, no matter the challenge in front of him. Throw in the fact that any two members could defend tag team gold, courtesy of “The Freebird Rule,” and this structure is all the more viable. 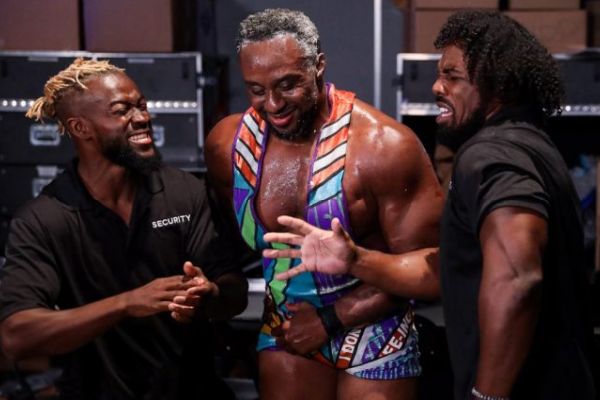 Diving Deeper into the Split

One could argue that this split is designed to help Big E become a greater singles star. WWE began this trajectory during the summer while Woods was out with an injury and Kingston sat out. The powerhouse of The New Day was forced to go it alone and he has done admirable work as a singles competitor. His battles with Sheamus have been especially entertaining. Does his singles run have to come at the cost of The New Day’s fracturing as a team? Based on Kingston’s rise to the main event last year, this would be an emphatic “no.” For evidence of this, look at factions in other wrestling organizations.

New Japan Pro Wrestling has three primary factions: CHAOS, Bullet Club, and Los Ingobernables de Japon. Despite this, the members of the factions in question aren’t tethered to one another. For example, in LIJ, while Tetsuya Naito can pursue gold in the heavyweight division, BUSHI and Hiromu Takahashi can work toward success in the junior heavyweight tag team scene. The New Day could operate in the same fashion, but for the most part, groups in WWE tend to work as a unit. Kingston was able to win the WWE Championship while The New Day persisted, even becoming stronger, so why couldn’t the group do the same under these circumstances? 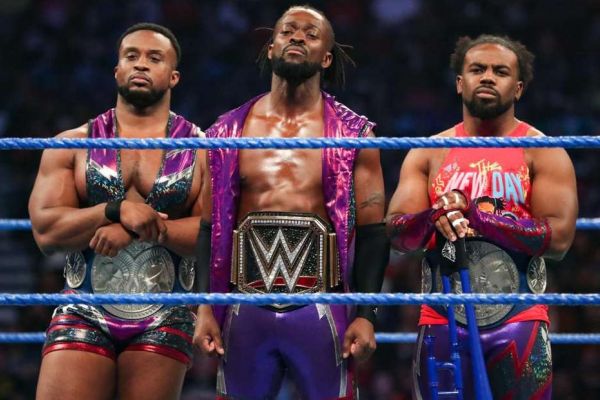 It may be early in The New Day’s fracturing, but this appears to be nothing more than WWE splitting a group for shock value. WWE’s primary focus, at least from a creative standpoint, is creating moments. The inherent issue with this is that the moments don’t always coincide with storytelling viewers can get behind. The New Day, as we knew it, is no more; what happens next? Do they continue to go their separate ways? Does the company develop buyer’s remorse, for lack of a better term, and reunite the trio in a few months? It’s difficult to say, but for now, The New Day’s split due to the WWE Draft is nothing short of unnecessary.