Hailed as perhaps the greatest professional wrestling tournament of the year, the G1 Climax continues to intensify in 2020. On day 13, as the tournament in question continues to heat up, New Japan Pro Wrestling fans will see the A Block participants compete in unique match-ups. These will be clutch as NJPW draws closer to the finals. Here are the matches set to take place and the odds of each participant thus far. 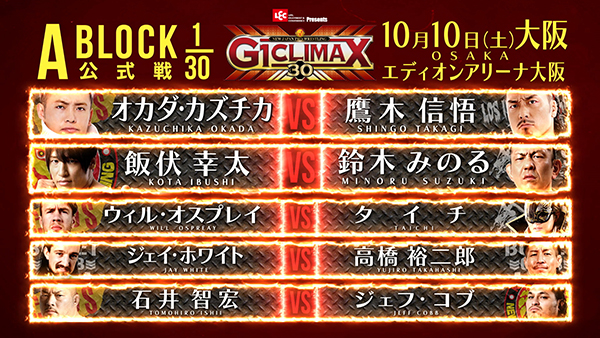 This battle of power and brutality will open this night’s round of action. It’s important to note that the “Stone Pitbull” Tomohiro Ishii has faced Jeff Cobb on multiple occasions in the past. Each time, Ishii emerged victorious. This isn’t to say that Cobb is out of the picture, as the young upstart of NJPW is looking to turn the tide of the G1 Climax in his favor. However, a victory will be clutch on this night; if he falls to Ishii once more, his aspirations of winning his first G1 Climax will be up in smoke. For the “Hawaiian Juggernaut,” the stakes couldn’t be higher.

To say that Yujiro Takahashi has been unlucky in this year’s G1 Climax would be an understatement. He has been the only competitor in both blocks that has yet to find himself on the scoreboard. Takahashi’s pursuit to win may hit another roadblock, though, as he finds himself up against former IWGP Heavyweight Champion, Jay White. As White is one of the leaders in the A Block, a victory will lead him toward the finals. For Takahashi, as he enters his tournament with zero points, he’s essentially playing for pride. What can NJPW viewers expect when these Bullet Club members clash?

To understand the history of Taichi and Will Ospreay, one must go all the way back to 2017. They met in that year’s Best of the Super Juniors tournament. Since then, both men have transitioned to heavyweight contention, attaining varying levels of success. They have also found themselves in contention for the NEVER Openweight Championship. This year’s G1 Climax could spell greater things for both men. Can the serenader of NJPW in Taichi pick up an important victory? Will this be Ospreay’s night as he takes to the skies to earn another two points as an A Block leader in his own right?

This is another match where history plays a pivotal role. Keep in mind that Kota Ibushi and Minoru Suzuki faced off in the former’s first G1 Climax; back then, Ibushi was a young junior heavyweight, unable to overcome the brutality and experience of Suzuki. Since then, Ibushi has grown and become a true heavyweight, showcasing a more aggressive, hard-hitting side. The “Golden Star” is no longer the lanky high-flyer; rather, he is a formidable opponent that the leader of Suzuki-gun will have to be well-prepared for. If Ibushi defeats Suzuki here, not only will he earn two more points but continue to thrive in the A Block.

This main event encounter will feature the first singles match between Shingo Takagi and Kazuchika Okada. In last year’s G1 Climax, Takagi made the metamorphosis from junior heavyweight to heavyweight competitor. He also went on to earn success as a solo star, including the NEVER Openweight Championship. The success of Okada is worthy of a publication all its own. Consider that the “Rainmaker” is a two-time G1 Climax winner, coming out victorious in 2012 and 2014. If Okada’s goal is to become a three-time G1 victor, overcoming “The Dragon” of Los Ingobernables de Japon will be essential.