The landscape of DDT is a unique one at the moment. Having won the King of DDT, Endo now has free reign to choose who he fights at Ultimate Party 2020. His original choice of Kenny Omega was declined due to travel restrictions, leaving his new choice a mystery. Additionally, as of September 1st, the Cyberfight unification has become official. This marks the first Korakuen Hall show under that banner. GET ALIVE 2020 features a six match card, including two title matches and one unit war match.

Akito and Yukio Naya vs Makoto Oishi and Mizuki Watase

Akito made it to the semi-finals of King of DDT. He is also seemingly rejuvenated in-ring, putting forward his best efforts, not content to rest on his new position as EVP of Cyberfight. However, as King of DDT fades into the past, the war between ALL OUT and Junretsu heats up once again. Akito will enlist the help of Yukio Naya to take on two members of Junretsu, the leader in Makoto Oishi and Mizuki Watase. Oishi shares the fact that he got an upset in the first round with Akito, pinning Chris Brookes. This match aims to be a strong start.

Antonio Honda recently laid out a challenge to Extreme Champion Shinya Aoki for the title, claiming that his reign needs to be weirder. Get ready to see what Honda means as he gears up with Super Sasadango Machine to face off against Kazuki Hirata and Keigo Nakamura. This match will be a very weird and very silly. What else could you really ask for when Gon the Fox faces off against Hirata Go at GET ALIVE 2020? 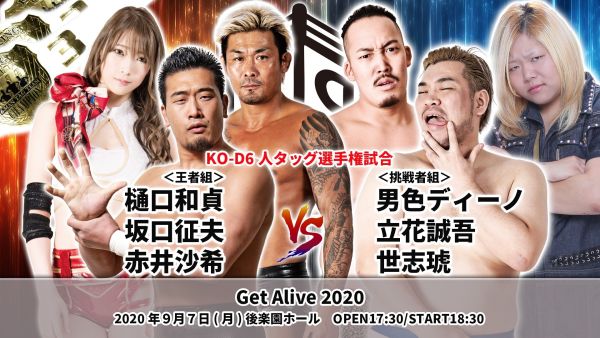 An interesting match has been set up here. Saki Akai and Yoshiko’s rivalry is well documented and spreads across multiple joshi promotions from STARDOM to SEAdLINNNG, with Yoshiko being the first to survive Akai’s Quetzalquotal even if it was via rope break. On the men’s side of things, Kazusada Higuchi managed to have a huge run during King of DDT. He made it to the semifinals, beating the likes of Konosuke Takeshita and HARASHIMA. Meanwhile, Yukio Sakaguchi went out in the first round in an upset. Danshoku Dieno and Seigo Tachibana believe that they have Sakaguchi’s weakness. They made him crack to the point of being unable to wrestle on the final night of King of DDT. What could this mean now that the belt is on the line? Will it be Eruption’s first six-man tag loss or will they remain dominant despite their opponents having the upper hand? 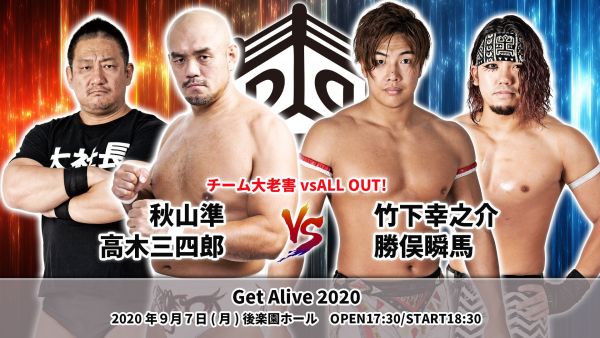 Konosuke Takeshita and Jun Akiyama will be facing off in a singles match at Ultimate Party 2020. Before that, at GET ALIVE 2020, they will team up to face a new and unexpected tag team in Big Boomers. This is an interesting foil between Akiyama and the Cyberfight president in Sanshiro Takagi tied together by their age and experience. ALL OUT will have to overcome this in order to secure the victory. 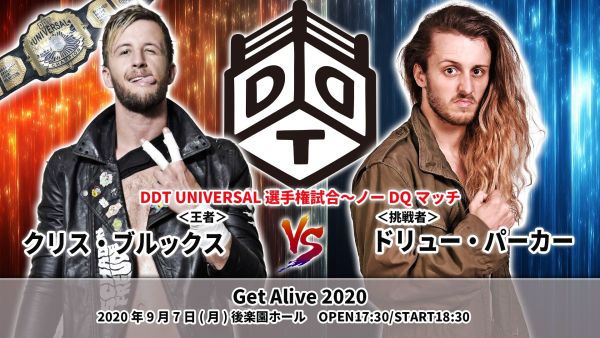 This match stemmed from beating DAMNATION in a tag match. Drew Parker declared that he would like to win a title in DDT, but not the tag titles with Chris Brookes. He chose instead to challenge Brookes for the Universal Title. The match was accepted and, soon after, a No Disqualification stipulation was added to the match. Nearly all of Parker’s encounters in DDT have been without rules. Being a Big Japan Wrestling (BJW) wrestler, this is where he thrives. However, Brookes just worked hard to get the title back from Daisuke Sasaki. Brookes do anything to keep it, including smashing a mug, forgoing the friendship. 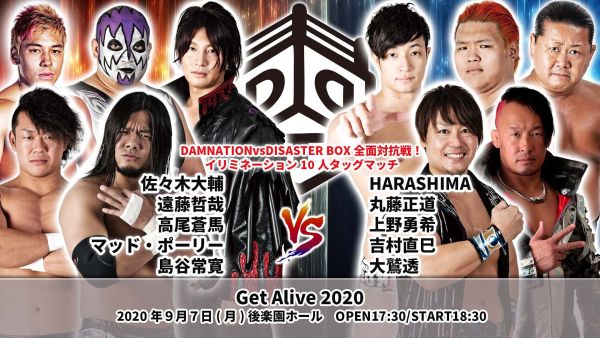 In the main event of GET ALIVE 2020, all of DAMNATION faces pretty much all of DISASTER BOX. Nothing is on the line but pride. That being said, there are some interesting developments to be taken from this. Nautilus will walk into this match together; if DAMNATION eliminates them, they would have a claim to a tag title shot. HARASHIMA and Naomichi Marafuji are together for the first time in a while, with one-half of their Ultimate Party 2020 opponents in Soma Takao. Perhaps most intriguing is Tetsuya Endo is in the match. Eliminating Endo might not mean much in the way of title rankings here, as he is set to name his opponent. However, he promised to name his opponent at this show. Naming them after a loss would be a huge blow to his momentum.

Stay tuned to the Last Word on Pro Wrestling for more on this and other stories from around the world of wrestling, as they develop. You can always count on LWOPW to be on top of the major news in the wrestling world, as well as to provide you with analysis, previews, videos, interviews, and editorials on the wrestling world.  Make sure to subscribe to Wrestle Universe to see more of DDT and it’s talent as well as the various promotions operating under the Wrestle Universe Umbrella. Looking to talk wrestling, pro football, or any number of sports? Head on over to the LWOS Boards to engage in conversation with fellow fans!