Njpw Strong is the weekly TV show from New Japan Pro Wrestling. It’s first few episodes are intent on crowning a brand new contender for the IWGP US Heavyweight Championship with the USA Version of the New Japan Cup. On episode 2 of this series. We will witness the semi-finals of this tournament, including some non-tournament action. 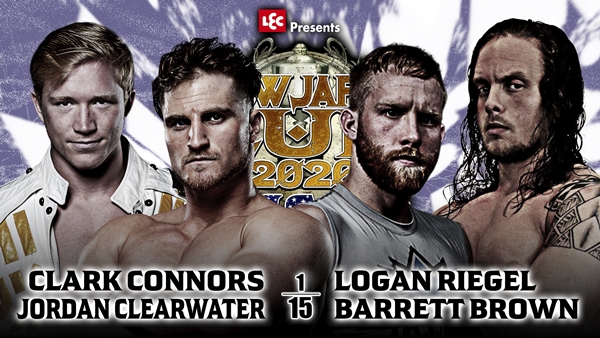 If you’ve watched New Japan before, you would know the name of young lion Clark Conners, If you remember the USA shows from last year, you might remember Barrett Brown. But these other two are having big moments in their careers. As Clearwater and Riegel are making their NJPW debut on this edition of NJPW Strong. Jordan Clearwater has been a mainstay of the Empire Wrestling Federation and Championship Wrestling from Hollywood, including working in various promotions in California. Logan Reigel has been in the midwest scene, including the likes of AAW and Glory Pro. But for New Japan, this is a time to stand out for all of them. Especially in the opening contest. 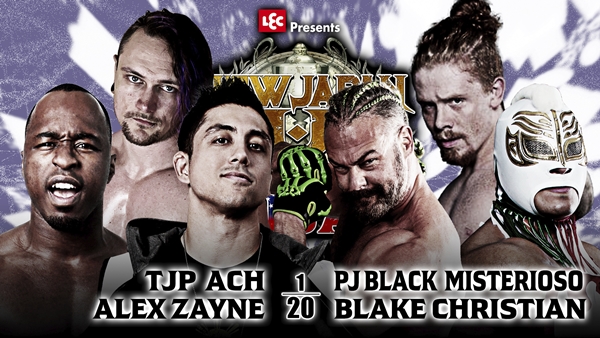 This match is special for many different people in this second match of the show. In the US Independent scene, two rivals have bee blazing a trail in recent times. Blake Christian and Alex Zayne. The rivalry between these two became a staple of the Independent scene. Including having many matches together over the past two years. PJ Black hasn’t been in NJPW yet, he’s been primarily working under Ring of Honor these past few years. TJP has been with New Japan these past few weeks.  Both are recognizable names from their stints in WWE.

Misterioso recently made his debut for the company on a recent episode of Lion’s Break Collision. But one of the more feel-good moments in this match is the New Japan return of ACH. ACH has had a very unknown and unpredictable career path as of late. But his return here against an all-star team is major. This match is a must-see for some. 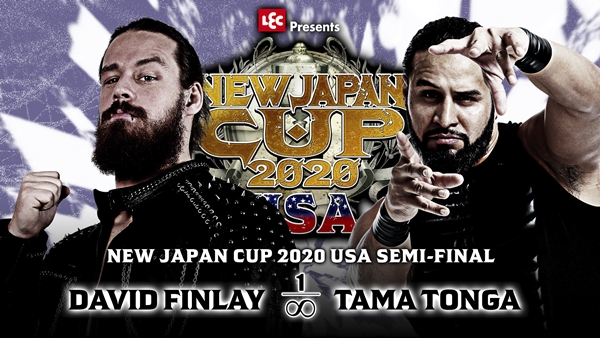 In the opening round of the New Japan Cup, Tama Tonga would defeat Brody King in a major upset in the tournament. David Finlay would defeat Chase Owens to continue into the tournament. To understand the rivalry between these two. We have to look back at both of their tag careers. At Wrestle Kingdom 14, David Finlay would defeat Tama Tonga and Tanga Loa alongside Juice Robinson to become IWGP Heavyweight Tag Team Champion. This brand new Tama Tonga, who is preaching a brand new era of Bullet Club looks to get his revenge against the man he couldn’t defeat at Wrestle Kingdom.

Interference might be common in this contest, possibly even in the main event too considering its bullet club heavy. The Winner of this match faces off against Jeff Cobb or KENTA in the finals of this tournament. So both matches are big fight feels. Especially in high ranking members of Bullet Club. But will David Finlay championship success continue? David Finlay and singles matches, since returning to the company hasn’t been great. But this tournament has made wrestlers stand out, it could do the same with this bout.

The main event of the evening is the second Semi-Final match of this New Japan Cup, featuring one of the dirtiest wrestlers of the scene, KENTA facing off against Jeff Cobb. As of this match, neither men have a history with each other. Not even having a singles match or tournament bouts together. Which gives this match an unknown circumstance. The winner of this bout goes against Tama Tonga or David Finlay.

While KENTA has only been appearing in this recent NJPW Strong shows. Both men have never challenged for the IWGP US Heavyweight Championship. While only Cobb has a history against Jon Moxley. Both men are still quite new to New Japan. But the impact of KENTA can be felt since his debut for the company.  The same couldn’t be said for Jeff Cobb. But that could change in this tournament. If he wins KENTA could face someone considered the uncrowned leader of the Bullet Club in Tama Tonga.

Stay tuned to the Last Word on Pro Wrestling for more on this and other stories from around the world of wrestling, as they develop. You can always count on LWOPW to be on top of the major news in the wrestling world, as well as to provide you with analysis, previews, videos, interviews, and editorials on the wrestling world.  Watch New Japan Strong & New Japan in general on NJPW WORLD.