ICW No Holds Barred (ICW NHB) returns to IndependentWrestling.tv for a two-night spectacular called Deathmatch Circus, featuring some crazy action and a bunch of incredible deathmatch match-ups. The action comes from Millville, New Jersey, and airs live on IWTV this Friday at 8pm EST. 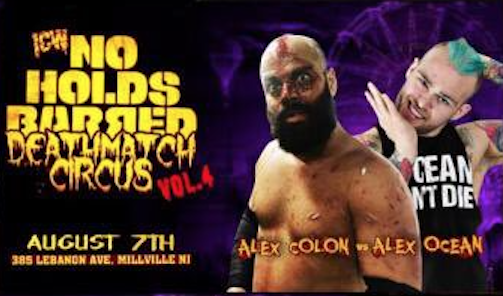 Alex Colon continues to be one of the most underrated grapplers – deathmatch or not – in the US indies and the Game Changer Wrestling (GCW) regular is also becoming a Gatekeeper in ICW NHB as well. The 2019 GCW Tournament of Survival 4 winner is no stranger to deathmatches – he also held his own in a tour of Japan earlier this year – and he’ll be going into Friday ready to face a young star now making his own name in the deathmatch circuit. Alex Ocean, a regular with Coastal Championship Wrestling (CCW), has also cut his teeth in Mexico with Desastre Total Ultraviolento (DTU) and faced Eric Ryan, this year’s 2020 IWA Mid South King of the Deathmatches, at last month at the Deathmatch Drive-In. Another big test for Ocean as he becomes one of ICW NHB’s breakout stars in 2020. 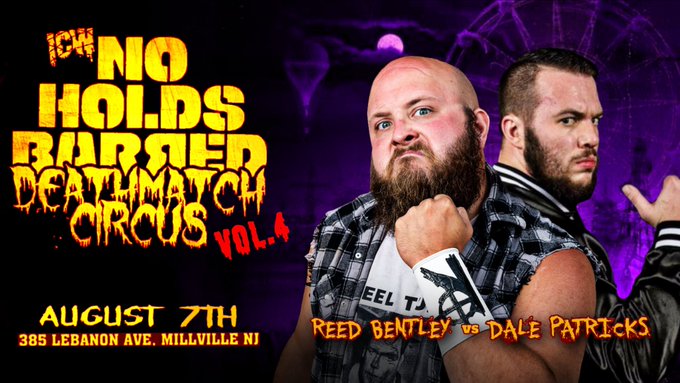 Reed Bentley is one-half of The Rejects (with Johny Wayne Murdoch) and a former 3x IWA Mid South Heavyweight Champion and 3x Tag Team Champion with The Rejects (IWA-MS, Paradigm Pro Wrestling, GCW). A violent man, he’s going up against Indiana’s Dale Patricks, who had a memorable run in this year’s King of the Deathmatches, beating Josh Crane and Aeroboy to make it to the semi-finals where he bowed out to SHLAK. A regular with IWA Mid South and Indiana’s Wild Championship Wrestling Outlaws (WCWO), he’s making his ICW NHB debut on Friday.

Eddy Only vs. Eric Ryan 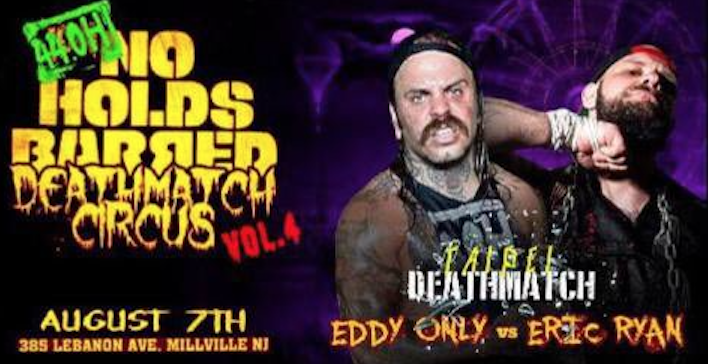 Two members of GCW World Champion Rickey Shane Page‘s 44OH faction will face off against each other in a Taipei Deathmatch. While Eric Ryan and Eddy Only are usually terrorizing the indies together, on Friday they will face each other. Eric Ryan won this year’s IWA Mid South King of the Deathmatches last weekend (with help from Only), so he’s on a huge momentum, but Eddy Only will be out to prove he’s got the chops to keep up with the other names in the stable. 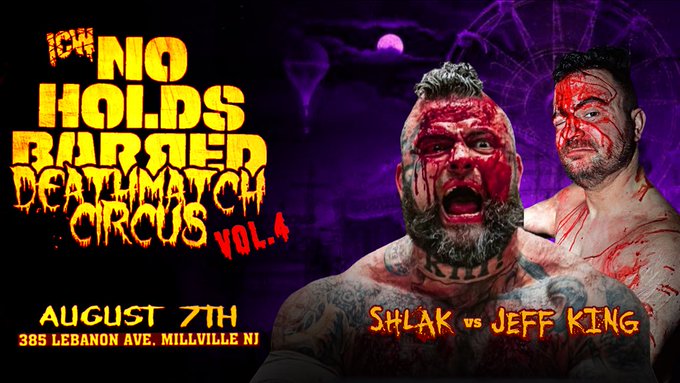 Speaking of King of the Deathmatches, SHLAK was the man who Eric Ryan defeated in the finals, and let’s just say SHLAK isn’t in a great mood, considering it took Ryan and several of his 44OH teammates to bring the big man down. But he’s got an equally insane opponent on Friday, as he faces off against Michigan’s Motor City Madman, Jeff King. A 20-year veteran, he’s currently a regular with Detroit’s Horror Slam, but also competes for GCW, Hardcore Hustle Organization (H2O), and IWA M-S amongst others. 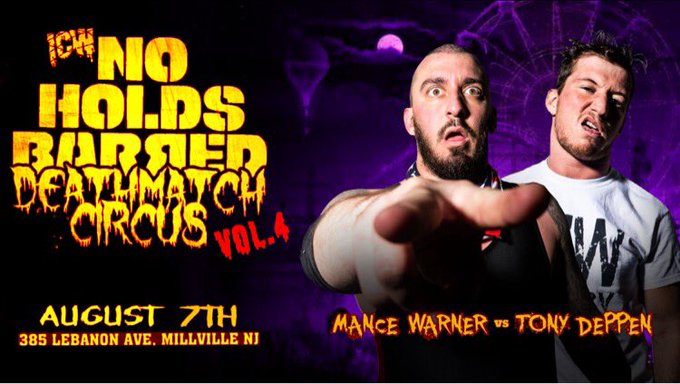 Two names who have become synonymous with hard-hitting match-ups, Mance Warner and Tony Deppen both had huge 2019s. These two longtime regulars with GCW and ICW NHB had their first-ever singles match this past January at GCW Just Being Honest, where Deppen pulled out the win, but now in a deathmatch setting of the Deathmatch Circus, its anyone’s game, but with ol’ Mancer’s wildman persona, you’d have to think this is Warner’s time to even the score. 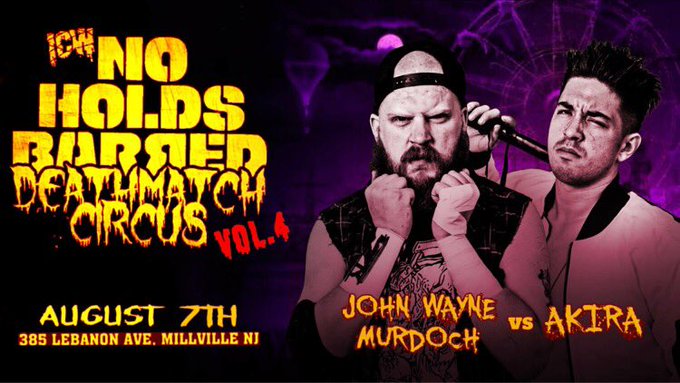 John Wayne Murdoch is no stranger to violence, both as a singles wrestler and in tag team action with The Rejects alongside Reed Bentley. Murdoch is a 5x IWA Mid-South Heavyweight Champion and has held tag team gold with The Rejects in GCW, IWA Mid South, and Paradigm Pro Wrestling (PPW), and won the IWA-MS 2016 King of the Deathmatches Tournament. He’s facing another of ICW NHB’s breakout stars of 2020 in the “The Deathmatch Samurai” Akira. The rising star went viral with his huge match against Matt Tremont last month at ICW NHB Volume 3: Deathmatch Drive-In – where he scored a huge upset – and now all eyes will be on Akira as he faces another hardcore legend.

Stay tuned to the Last Word on Pro Wrestling for more on this and other stories from around the world of wrestling, as they develop. You can always count on LWOPW to be on top of the major news in the wrestling world, as well as to provide you with analysis, previews, videos, interviews, and editorials on the wrestling world. ICW No Holds Barred, Vol. 4: Deathmatch Circus, Night 1 will be airing live on IndieWrestling.tv at 8pm EST on Friday, August 7, 2020.