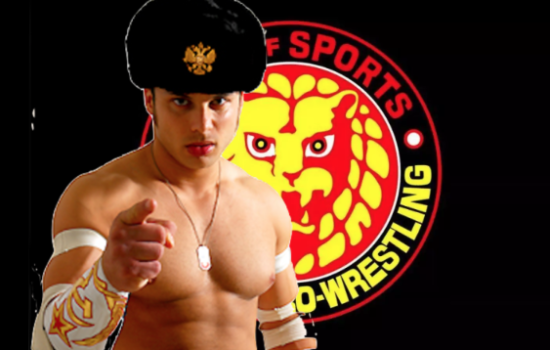 On Thursday, New Japan Pro Wrestling (NJPW) announced the return of former NJPW star Alex Koslov, a 2x IWGP Junior Heavyweight Tag Team Champion alongside Rocky Romero in Forever Hooligans, to the company. But Koslov, who retired from in-ring competition in 2015, won’t be returning to the ring. Instead, he’s been announced as New Japan’s newest color commentator, who will be joining the broadcast team alongside Kevin Kelly for NJPW STRONG, the new Friday night program concentrating on NJPW USA.

Back with my favorite company to work for!! https://t.co/CSMm6aBLhP

Born in Moscow, Russia but raised in Los Angeles, California, Alex Koslov began his wrestling career in 2003, as a student of Jesse Hernandez from Empire Wrestling Federation (EWF). He spent the next few years blossoming in the West Coast indie circuit with the likes of Pro Wrestling Guerrilla (PWG), EWF, Alternative Wrestling Show (AWS), and Championship Wrestling From Hollywood (CWFH). In 2006, he would begin working with New Japan’s original LA Dojo, competing in New Japan Dojo shows in the Los Angeles area. He also debuted in Mexico with Consejo Mundial de Lucha Libre (CMLL) that year, where he continued to work until jumping to rival AAA Lucha Libre in 2008. During his time with AAA, he became a 2x AAA World Cruiserweight Champion and AAA World Mixed Tag Team Champion with Christina Von Eerie as part of Konnan‘s foreign heel stable, La Legion Extranjera. He would go to form a trio, called D-Generation Mex alongside Rocky Romero and Sean Waltman (X-Pac).

In 2008, he would get his first break on US national television with a brief stint with TNA/IMPACT Wrestling, which saw him compete during the summer, capped off with participation as part of Team International in the 2008 World X Cup at TNA Victory Road. A year later he would debut with Ring of Honor, competing in singles competition, before signing with WWE in August of 2010. He reported to Florida Championship Wrestling (FCW), where he competed as Peter Orlov and was briefly paired with Rusev until ultimately being released in 2012.

He returned to New Japan following his WWE release, this time heading to work with the main roster in Japan, where he competed in his first Best of the Super Juniors in 2012. Alex Koslov would soon join Chaos, where he reteamed with former D-Generation Mex partner Rocky Romero in a new tandem, called Forever Hooligans. The duo competed in the Super Junior Tag League in 2013 and 2014, winning the IWGP Junior Heavyweight Tag Team Championships on two occasions. He would also compete in two more Best of the Super Juniors, in 2013 and 2014.

Shortly after his appearance at NJPW Wrestle Kingdom 9 in 2015, Koslov shocked the world by announcing he was taking a sabbatical from pro wrestling, of which he’s never returned. Until now. And now one of the most popular and underrated stars of the 2000s and 2010s is making his return to New Japan’s home in Los Angeles to add his voice to the broadcast team for NJPW STRONG.