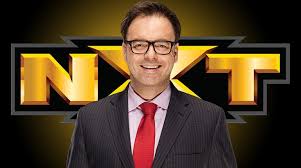 No doubt this week has been full of news regarding WWE´s development brand, NXT. This Thursday, the wrestling world arched eyebrows on the notice of Mauro Ranallo returning to the company.

As we already informed, Mauro’s departure from WWE was big news last April when after weeks of lots of rumors saw the light, mainly in social media, about JBL’s bully attitude and Mauro being victim of it. Little more information was spread, but Mauro announced that parting ways had nothing to do with former announce table partner JBL.

And when everything was calm and chill, this Thursday, the following surfaced on the net:

And everybody is losing their minds.

What can we say about this? Firstly, lots of talk about Ranallo´s health gained him  sympathy overseas. He is a diagnosed and well known bipolar disorder sufferer and this was one main theme regarding the JBL rumors in April. One can think that since WWE and Mauro parted ways on murky terms, making out and establishing a work relationship again may help in eradicating that bad taste the departure left in the mouths of fans who were strong supports of Ranallo.

Mauro is a passionate and energetic commentator who has covered U.S transmissions of NJPW and is very well versed  on MMA as well, which has engendered him to fans from both worlds. When he got paired with Daniel Bryan on the Cruiserweight Classic Tournament´s announcement table last year, both the media and that fans largely celebrated the move, starting off his run on Smackdown Live as one that received oodles of praise.

The NXT chapter has begun

Last night during the NXT tapings, Mauro Ranallo was introduced as the new member of the NXT announcement table by HHH, who said that Mauro was “again at home”.

No doubt this is good news (think about the possibilities of Mauro paired with Nigel McGuiness ). NXT will be a good home for Mauro’s indy style of locution and he surely will avoid the micromanaging Vince McMahon has imposed on broadcasting team. We only hope this tenure on NXT to be productive and great for both sides.

Aleister Black: NXT’s Next Superstar
Who Is Seth Rollins?