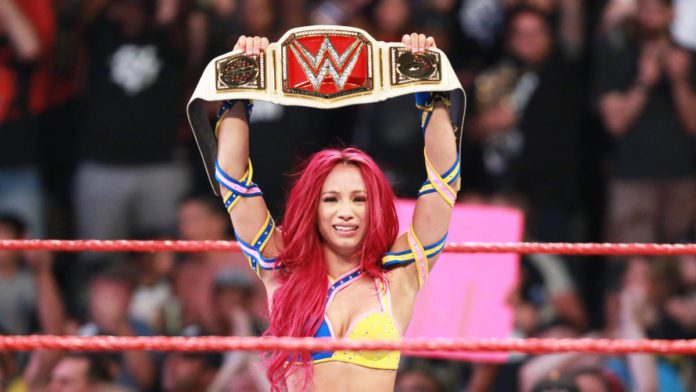 The first Monday Night Raw of the month hails from Los Angeles California. If you haven’t already, be sure to go back and check out the article that reviewed the entire month of September! This episode featured Hyde and Kelso, also known as Danny Masterson and Ashton Kutch(n)er as celebrity guests, as well as a WWE Women’s Championship match in the main event.

The opening segment opened with the Kidz Bop version of The Shield‘s music as Roman Reigns, the United States Champion, made his way to the ring. He was giving the WWE Universe a history lesson about his Samoan heritage when Lana interrupted him. Lana explained that she was out to negotiate another U.S. Championship match with Reigns. The whole encounter was very uncomfortable and felt forced until Rusev came out and the two exchanged blows. It looked like Rusev was going to leave with Roman’s United States Championship, but Reigns snuck through the crowd and hit the Bulgarian Brute with a Superman Punch. Then the U.S. Champion announced he would give Rusev another championship shot, this time in the hell in a cell.

The two former friends locked up in the first match of the night. T.J. Perkins and Brian Kendrick shook hands before the match started, and all hell broke loose. T.J. Perkins was flying all over the place, demonstrating his signature athleticism. Kendrick hit “Sliced Bread”, the move that instantly makes the crowd cringe as they think of Eva Marie, but Perkins kicked out. Then, almost anticlimactically, Brian Kendrick made T.J. Perkins tap out in the middle of the ring.

While the match featured plenty of pretty spots, it didn’t live up to the high standard set by other CruiserWeight matches on recent episodes of Raw. It was a good bout, but nothing spectacular.

The next segment saw a pre-recorded interview between Michael Cole and Seth Rollins. Seth Rollins was a completely different character. Gone was the arrogant laugh and Rollins’ signature smarminess, and instead we got a focused, driven Rollins. He said that he believed he was screwed out of the WWE Universal Championship by Triple H and Chris Jericho, and that he deserved another shot at the title. Rollins teased tension with Stephanie McMahon, and declared that he would cancel the Kevin Owens show.

This week’s jobbber, Chase Silver, cut a bit of a funny promo. He said he moved from Idaho to Hollywood, because he believed his dreams could come true. Well, his dream quickly became a nightmare as Braun Strowman absolutely destroyed him.

Byron Saxton asked Strowman what was next for him, and Strowman said what we have all been thinking. He said that he was being wasted on jobbers, and that if Mick Foley didn’t have a real test for him next week, there might not be a next week.

The Universal Champion and his best friend made their way to the ring following the break, reportedly to respond to what Rollins said to Michael Cole. As always, Kevin Owens was absolute gold. He started off by insulting Cole, and immediately began belittling Seth Rollins. He took credit for hurting Rollins’ ribs, and explained why he didn’t believe Rollins believed a rematch.

Things got interesting when Owens declared that Chris Jericho should be the special guest referee if the match did happen. Jericho liked the idea, but instead suggested that JeriKO challenge The New Day for the Raw Tag Team Championships. Originally Owens said now, but then, for the very first time, Jericho mentioned that it “wasn’t like he was going after the Universal Championship”. For some reason, Owens agreed, and on queue, the tag champs came out.

The New Day and JeriKO engaged in a hilarious back-and-forth, highlighted by Xavier Woods panicking as Jericho added him to “the list”. The segment just got better and better. Both teams agreed to have their match, but later that night.

Titus O’Neil debuted a new gimmick, the “Titus Brand”. We at Last Word On Sports don’t know about you, but we’re hoping that eventually we get “Broken Titus O’Neil” and “Brother Darren”. Surprisingly, the match was pretty quick. Even more surprisingly, it wasn’t very good. Titus beat Sami Zayn up for most of the match, and then suddenly Zayn got a little offense in and he hit the Helluva Kick for the win. Zayn is one of the best workers in the company and O’Neil is underrated, but the match was a dud.

The Golden Truth vs. Gallows & Anderson

Luke Gallows and Karl Anderson were already in the ring when we came back from commercial break. We didn’t get to see their entrance, but they did feel the need to show us the god awful sing-a-long entrance of the WWE’s geriatric duo. In no world should 44 year old R-Truth and 47 year old Goldust be any kind of challenge for Gallows and Anderson. The fact that this match was ever remotely competitive is upsetting. Eventually the duo hit the “Magic Killer” and got the win, but it doesn’t feel like the WWE will ever give them the push they deserve.

Enzo and Cass were in the ring with three cancer survivors and a pink table when we came back from break. The WWE’s relationship with Susan G. Komen is very important to them, and it’s understandable that they would want to proudly display that. However, grading it like a wrestling segment just felt inappropriate. The fight that these women have fought and won is far more important than anything that takes place inside a wrestling ring.

JeriKO vs. The New Day

Ashton Kutcher and Danny Masterson joined the commentary team at ringside as the Raw Tag Team Champs took on the Universal Champion and his best friend. Kutcher was painfully bad, but Masterson held his own. When the Universal Champion and Tag Team Champions are having a match, the commentary team doesn’t need to be selling a Netflix show. Corey Graves tried to save the segment, but he couldn’t.

Kevin Owens said it was it was Stone Cold Steve Austin who told him to just keep talking, and it’s funny that years after retirement, he’s still making Raw a better show. Owens trash-talking his opponents and the crowd is often the best part of his match.

Seth Rollins appeared at the top of the stage, providing a brief distraction, but it didn’t change anything. It wasn’t until Jericho had the Lion-Tamer on Xavier Woods that Rollins came down to the ring and made a difference. After Big E got the win, Rollins picked Jericho up and hit him with a pedigree.

The commentary was so bad, it took away from a decent match. Chris Jericho was busted open at some point, and both teams did a great job inside the ring. As great as the segment selling this match was, the match itself was just okay. Though, it’s always fun seeing Seth Rollins and the New Day together.

Rich Swann is so much fun. The minute he flashes onto the screen, he just oozes charisma. He looks like he’s having so much fun, and that makes him so easy to root for. Meanwhile, Tony Nese is just exceptionally talented. He’s a fantastic athlete and a very good worker. The two put on a really fun match. This is exactly what CruiserWeight wrestling should be, and it’s shame that it looks like the CruiserWeight division can’t win any other gold on the show. Surprisingly, Nese got the pinfall, and he continues his march towards the CruiserWeight Championship.

The two did the “anything you can do, I can do better” entrance yet again. The two kept trying to one-up each other, only to end up bickering in the ring. This angle is a work in progress, but it’s a good one. The only thing that might derail it’s success is how over Cesaro is compared to how over Sheamus isn’t.

Before the match even started, there was an interesting development. Dana Brooke tried to bully Bayley, and everyone’s favorite girl next door fought back. Bayley threw Brooke against a box, seemingly knocking her out of the match and leaving Charlotte to take on Sasha Banks on her own.

Sasha Banks needs to stop using her suicide dive. The recklessness of how she does it is making the name all too literal. The match was very good, but as it seems to be the case every week, the main event started so late. Charlotte busted out a corkscrew moonsault off the top rope outside of the ring, and it was absolutely gorgeous.

Sasha eventually made Charlotte tap out, but honestly, it didn’t feel all that exciting. They’ve already made Sasha beat Charlotte on Raw. They did it a couple of months ago. The angle feels stale, and despite a couple of great spots… It wasn’t that special.

Best Segment/Match of the Night- Kevin Owens, Chris Jericho, and The New Day.

This segment was absolutely amazing. Watching five of the WWE’s best talkers go back and forth was great, and the segment lasted exactly as long as it should’ve. It freshened up the New Day, it laid the foundation for a Jericho/Kevin Owens match, and it made everyone laugh. It was just perfect.

Worst Segment/Match of the Night- Sami Zayn vs. Titus O’Neil

This match didn’t do anyone any favors. Whatever Titus O’Neil’s new gimmick was, he didn’t get a chance to display it. If the “Titus Brand” gimmick was supposed to play out like Lex Luger‘s narcissistic gimmick, it failed miserably. Even Zayn looked weak, as he basically got beat up the whole match before hitting his finisher. That might work for John Cena, but not Sami Zayn.

It was a decent show. There wasn’t really a standout match, but they definitely brought the “entertainment” aspect of sports entertainment to this episode. It feels weird that there isn’t a legitimate main event feud. Rollins and Owens will have another title match, but it feels like all the focus is on either Owens and Jericho or Rollins and Stephanie McMahon. The title seems to be taking a backseat to a Rollins/Triple H feud that half of the angle isn’t even present for.