NXT Worlds Collide is this Sunday at 4 p.m. ET as NXT 2.0 and NXT UK come together for what will see three pairs of titles unified with NXT UK closing its doors with the development of NXT Europe coming soon. The show is packed with major matches including one of the biggest main events in NXT history. Here’s a look at the card and who may walk out of the two biggest matches of the night as undisputed champion.

NXT Worlds Collide: A Look at the Show’s Most Important Matches

Can Blair Davenport Take All The Gold from Both Dominant Champions?

The dominant reign of Mandy Rose and the equally as dominant reign of Meiko Satomura are both at risk as both women could walk out of the show without gold. Blair Davenport earned herself an opportunity at Satomura and the NXT UK Women’s Championship which has given her a shot to enter herself into this match. She’s as much of a wild card as any due to her overall presentation and dominance in her short time on NXT UK. She walked through Indi Hartwell in her NXT 2.0 debut and has promised that the Unified NXT Women’s Championship will be hers at the end of Worlds Collide. It’s difficult to bet against because frankly, Rose has escaped by the skin of her teeth and the luck may be running out.

Satomura is interesting here. The Joshi legend is called “The Best in the World” by the NXT UK broadcast and for good reason, but a triple threat match could be the best way to see her get dethroned Sunday afternoon. This is all a coin flip but it feels as though the woman walking in without any gold will walk out with all of it. 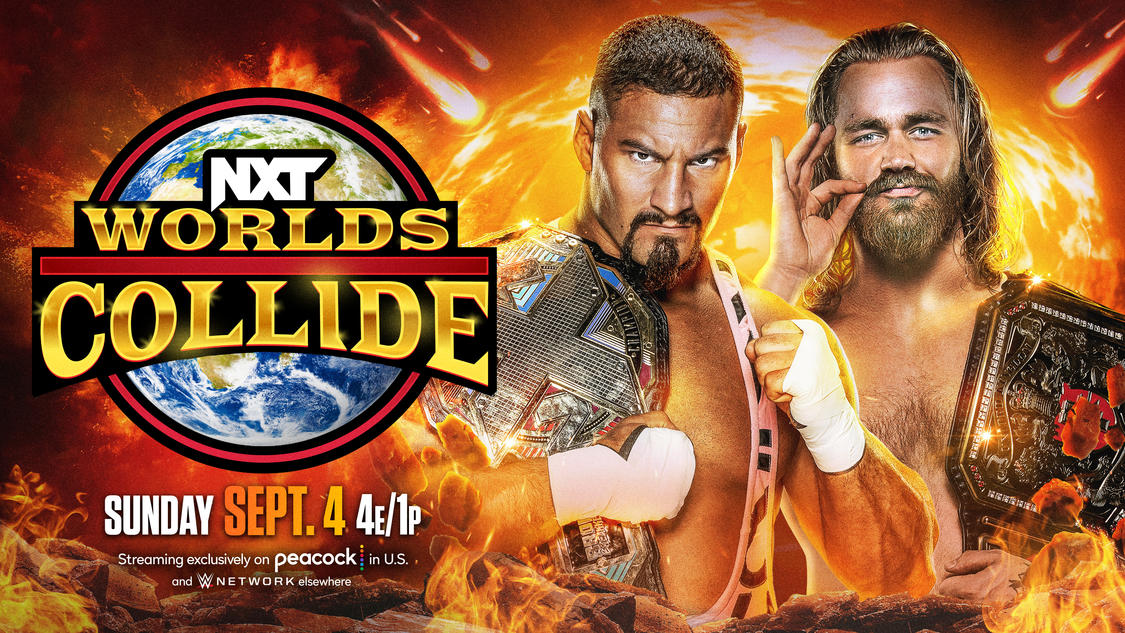 One of the biggest main events in the history of NXT goes down this Sunday at Worlds Collide. That’s right. Whether it’s the game show, the black and gold era, the UK, or this rainbow splatter we deal with nowadays — this is one of the biggest matches in NXT history. The NXT Champion vs. The NXT UK Champion is a match people would have been dreaming of three years ago when it was WALTER and Adam Cole or going further back to Pete Dunne’s reign as champion. There were times when this was a dream. Now we get it and while the situation is much different, it should be excellent.

Bron Breakker has lost some steam since his initial run with the NXT Championship. Perhaps that is due to losing the title and not winning it back until an episode of Monday Night Raw or it’s because his feuds have been with Joe Gacy and JD McDonagh. Let’s go with the latter here. But now a match with the first and last NXT United Kingdom Champion Tyler Bate? Yeah, that’s something we can dig into. For some fans, this may be the first match they’re seeing Bate in since COVID-19 struck unless they were checking out NXT UK. Let’s just say that the “Big Strong Boi” is still a great professional wrestler. All signs point to Breakker potentially winning and Bate going to the main roster, but let this be clear — whoever loses should be moving on up. Expect this to be a great main event.

Opinion: After Weeks Of Highs, Triple H Has Found His First Low
Imperium Reunites at WWE Clash at the Castle