Match Point is an ongoing series at Last Word on Pro Wrestling, where we look at intriguing matchups in indie wrestling and beyond. They may be dream matches, first-time matchups, or hotly anticipated rematches. At WWE Clash at the Castle, Intercontinental Champion Gunther defends the gold against number one contender Sheamus. Here’s what to know before the match takes place this Saturday.

On the August 19 edition of Friday Night SmackDown, one of the most interesting matches set for WWE Clash at the Castle was established. This Saturday, at the Millennium Stadium in Cardiff, Wales, Gunther will defend the Intercontinental Championship against Sheamus. On paper, this promises to be a hard-hitting affair between two wrestlers that have yet to meet in singles competition. Here’s what to know before Gunther faces Sheamus, with the IC title on the line, at Clash at the Castle.

Gunther vs. Sheamus – What to Know

Formerly known as WALTER, Gunther made his SmackDown debut in April alongside Ludwig Kaiser, the former Marcel Barthel. It didn’t take long for “The Ring General” to make an impression on the blue brand, topping Ricochet for the Intercontinental Championship the following June. Since then, Gunther has been a dominant champion, retaining the gold in a rematch with Ricochet and against Shinsuke Nakamura, the latter proving to be one of the best IC title matches in recent memory.

The dominance of Gunther should come as no surprise to wrestling fans familiar with his work. The Austrian powerhouse was the longest-reigning NXT United Kingdom Champion, holding the title in question for a staggering 870 days. From Dave Mastiff to Tyler Bate to Pete Dunne, Gunther’s reign as the NXT UK titleholder was a clear showcase of his dominance. Thus, when he made the move to SmackDown, it was expected that similar dominance would be showcased. Needless to say, viewers have not been disappointed. At Clash at the Castle, however, Gunther faces arguably his greatest challenge yet in “The Celtic Warrior,” Sheamus.

Sheamus Aims for the Missing Accolade

The August 19 episode of SmackDown saw Sheamus compete in a Fatal Five-Way contest that also featured Madcap Moss, Happy Corbin, Ricochet, and Sami Zayn; the winner of said match would be declared the #1 contender for the Intercontinental Championship, going on to face Gunther at Clash at the Castle. This was a competitive affair, featuring everything from high-flying maneuvers by Ricochet to an earnest in-ring performance by Zayn, who was competing in front of a partisan Quebec crowd. However, this match belonged to Sheamus, who executed a Brogue Kick on Corbin for the pinfall victory.

On The SmackDown LowDown later that evening, Sheamus was interviewed backstage regarding his upcoming match with Gunther. “The Celtic Warrior” recognized that the Intercontinental Championship was the only major WWE title he never held. Despite numerous attempts to capture said title, Sheamus said he was “shortchanged.” However, he believed Clash at the Castle to be his stage to claim the proverbial missing piece of the puzzle. Sheamus then shifted his attention to Gunther, telling “The Ring General” he would drag him “into the belly of the red dragon” and defeat him for the Intercontinental Championship. 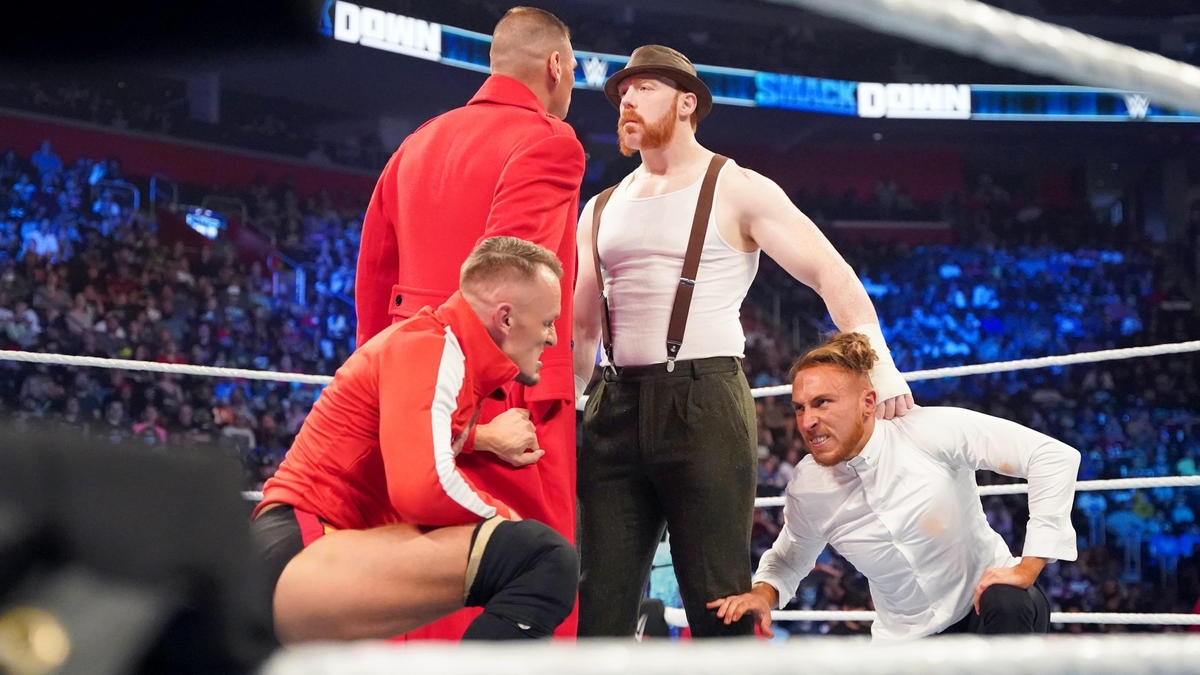 It was on the August 26 edition of SmackDown that Gunther and Sheamus met ahead of Clash at the Castle. Sheamus didn’t come alone, however, as his fellow Brawling Brutes in Ridge Holland and Butch stood at his side against Gunther and Ludwig Kaiser. Sheamus took umbrage with Gunther calling himself “Ring General,” as Sheamus believed himself to fit the term better, having bested everyone from Roman Reigns to John Cena to Triple H. Furthermore, Sheamus claimed he had “banger after banger after banger” in the ring before noting he saw much of himself in Gunther, noting the Intercontinental Champion’s brutal approach in the ring. Despite this level of respect, Sheamus made it clear that, at Clash at the Castle, he will seize the Intercontinental title.

Gunther took the mic, stating that while Sheamus deserved respect, they were not alike. Gunther aimed to protect the Intercontinental Championship, and to do that, he would teach “The Celtic Warrior” what violence really meant at Clash at the Castle. Not only would Gunther chop Sheamus’ chest to bits but break his body and spirit. This segment ended with Butch suddenly attacking Kaiser, Holland soon becoming involved in the melee. All the while, Gunther and Sheamus stared one another down in the ring. They understood the importance of their match at Clash at the Castle, and regardless of what transpired outside of it, little else mattered as much.

Gunther vs. Sheamus, Clash at the Castle – In Closing

To say that Clash at the Castle is an important platform for Sheamus would be an understatement. Since 2009, “The Irish Curse” himself has become one of the most decorated WWE Superstars. Five tag team titles, 3 United States titles, 3 world titles, not to mention the King of the Ring tournament and Royal Rumble matches, are collective evidence of his success over the years. However, as mentioned earlier, the Intercontinental Championship has long eluded him. By capturing the gold at Clash at the Castle against Gunther, Sheamus has the opportunity to become, in his own words, the first-ever Ultimate Grand Slam Champion.

The status of Grand Slam Champion is one that’s shared by a select group of wrestlers. Such names include, but aren’t limited to, The Miz, Kofi Kingston, Rey Mysterio, Seth Rollins, Edge, Kurt Angle, and Eddie Guerrero. Given his accomplishments, including the aforementioned ones, Sheamus would not be out of place in this company. However, to reach this milestone in his career, “The Celtic Warrior” will have to best Gunther, not only capturing the Intercontinental Championship but handing “The Ring General” his first loss since his April debut. Can Sheamus become Ultimate Grand Slam Champion, or will his hopes be dashed by an overwhelming effort from Gunther?