WWE Raw this week emanates from The Mecca Of Entertainment. In a rather ironic twist, the first episode of Raw that will not be heralded by Vince McMahon is in the very mecca that saw his empire grow. Do we really need to run down the list of amazing moments to come from the WWE in this venue? They are far too long. The silence following Ivan Koloff ending the 7-year reign of Bruno Sammartino. The birth of both Hulkamania and WrestleMania. The return of Triple H in 2002. The memorable Royal Rumble 2000 event. John Cena’s return at the same event in 2008. Randy Orton’s “stupid” tirade towards Kofi Kingston! It’s too long. Anyways here is a look at the WWE Raw card for this event at MSG.

Who’s that jumping out the sky?! R-E-Y! The original Rey Mysterio WWE theme, accompanying a series of vignettes hyping the arrival of this very beloved WCW midcard talent. No one could’ve ever have predicted what the San Diego native would go on to accomplish in the WWE. The trails he would blaze. The stereotypes he would shatter, the masks he would sell.

It all started July 25, 2002, defeating long-time nemesis, Chavo Guerrero, originally taped on July 23 from the Conseco Fieldhouse in Indianapolis, Indiana. WWE’s decision to “re-mask’ Rey Mysterio wound up being such a brilliant move for them, without a doubt.

In celebration of that anniversary, he will team up with Dominik to face The Judgment Day. Last week, Dominik agreed to join them if they stopped attacking Rey, but they seemingly turned on him. One thing is for sure. Edge’s return looms. We see the vignettes. And a major part of Rey’s first few months in WWE was in fact teaming with Edge to win the Tag Team Championships. Will history repeat?

Roman Reigns will be in the house

Brock Lesnar was present on Smackdown. I guess we need a go-home promo from Roman Reigns too, I suppose. Locally, he is advertised for a Trios match against the Street Profits and Riddle. More rinse and repeat stuff from this storyline. 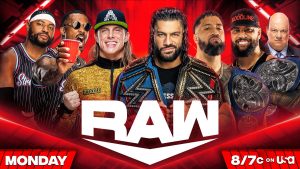 Logan Paul continues to chase after The Miz prior to their one-on-one match at Summerslam. WWE has him advertised to the show. One has to wonder if we are REALLY going to have those two face each other one on one while AJ Styles sits the show out and Tommaso Ciampa just simply roams around The Miz.

The Last Red Show Before Summerslam

Summerslam is just a week away. The match card is full, at least we assume. So we will likely see the last push for the matches mainly for the Raw brand. Which, with a match as heavily pushed as Bianca Belair vs Becky Lynch, we have to expect something major involving those two will take place. As well as Bobby Lashley and Theory for the United States Championship. With Theory being so integral not just to the match, but also the Unified Universal Championship by teasing a potential cash-in for the main event match.

Shark Week 2022: Looking Back at the History of Wrestlers Appearing in Sharknado
WWE to Revise Financial Statements to Reflect “Certain Payments”, Vince McMahon to Reimburse $14.6 Million