This Saturday is a big night for World Wrestling Entertainment (WWE) as it is the annual Money in the Bank premium live event. One man and one woman will earn the opportunity for a world title match anytime, anywhere after climbing to the top of the ladder to bring down the briefcase. Roman Reigns has the night off for yet another premium live event as it will be up to the two ladder matches, two women’s world title matches, and more to carry the show.

Seven of the best from the women’s division will collide Saturday night with the goal of bringing down the briefcase and earning themselves a chance against whoever walks out of the show as Raw or SmackDown Women’s Champion. An interesting fact when it comes to the Women’s Money in the Bank is that only one winner (Carmella) has held the briefcase longer than one day. Everyone else who has earned the opportunity has cashed in almost immediately. Two former winners lead the pack in this one as Alexa Bliss and Asuka pursue another world title challenge with a win. Fan-favorite Liv Morgan came close to winning one year ago before coming up short in her efforts.

The names of interest are Raquel Rodriguez, Lacey Evans, and Shotzi. Both Rodriguez and Shotzi have never competed, making them somewhat wild cards for the rest of the field. Evans, on the other hand, has been seen as a favorite and could solidify her return to the ring with a big win here. After all these names is the final entrant into the match — Becky Lynch. Lynch won the main event of Monday Night Raw to sneak her way into the match and based on her desperation to be champion again, don’t be surprised if she does all she can to win and get a title opportunity that she otherwise may not be getting for quite some time. 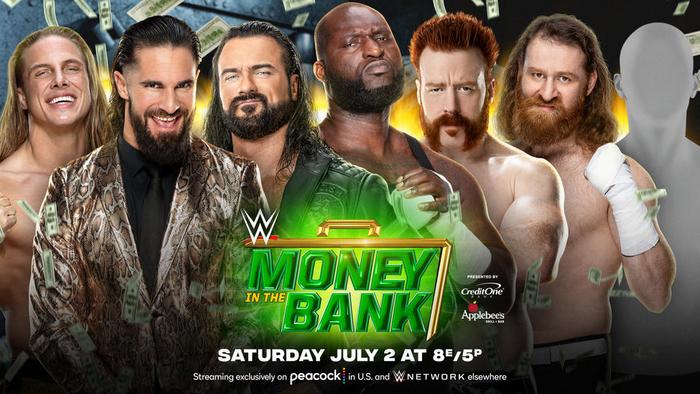 The one guarantee that comes with Roman Reigns and the Undisputed WWE Universal Championship being absent is that the Men’s Money in the Bank will be stacked. Three former world champions lead the field as a chance to stun “The Tribal Chief” hangs above the ring. Let’s start with Seth “Freakin” Rollins. He is one of two men in this match to win the briefcase in the past and it is well-documented how he utilized the opportunity to cash in at WrestleMania against Brock Lesnar and Roman Reigns. History could very well repeat itself for Rollins as Lesnar and Reigns are set to face off in a Last Man Standing Match at SummerSlam. Rollins enters the match as a favorite.

Drew McIntyre and Sheamus also should be at the top of the lists as favorites seeing Paul Heyman, on behalf of Reigns, seemingly tried to keep these men out of the match. McIntyre has already challenged Reigns for a match at Clash at the Castle but one way to guarantee it is by winning this match. Sheamus has won this match before and used the contract to cash in on Reigns so there’s no doubt “The Celtic Warrior” would like to do it again. The other names in this match include Riddle, who won a last chance battle royal, Omos, who presents an interesting mountain for the other competitors to climb, and Sami Zayn, who is an “honorary Uce.” Zayn has claimed he won’t cash in on Reigns and the only reason he is in the match is to prevent everyone from having that opportunity. We’ll see. WWE has yet to announce how the final participant will be decided.

There are no guarantees as to who will walk out as the winner and this match, much like the women’s one, could see anyone win.