Dates are important. So important that the journey to the AEW World Championship match in the main event of Double or Nothing can be told long before Hangman Page and CM Punk acknowledged one another on a television screen.

Jan. 8, 2019. The day All Elite Wrestling (AEW) held their first press conference to reveal the promotion, the first event Double or Nothing, and for multiple wrestlers to make their mark. It was at this show Hangman Page told the world he would be the AEW World Champion. It was also the start of fans wondering if the man who had left wrestling behind, CM Punk, would be a part of this brand new project started by Tony Khan and others. Almost the beginning without knowing it was the beginning.

May 25, 2019. Not only was this the first Double or Nothing event but it was the last time the PPV took place in Las Vegas until this year. Hangman Page officially began his journey to the AEW World Championship at this show, winning the Casino Battle Royale to be one of two men to compete for the AEW World Championship in the main event of All Out. Surprises were expected and while the world got Jon Moxley, there was no sign of CM Punk despite hope by fans it would happen.

Aug. 31, 2019. The first-ever All Out and the crowning of the first AEW World Champion. Hangman Page entered the event trying to achieve a dream and lead the company in his vision. By the end of the show, Page came up short as Chris Jericho, a man as connected to WWE as anyone in the company, walked away as the champion. “The Cowboy” had to accept failure and fight back — rather it was a spiral that would not only get him to be more confident in the two years of his journey but would get the AEW faithful behind him like never before. And once again, there was no CM Punk to be found. It’s when the hope of any surprise began to dissipate.

Aug. 20, 2021. AEW Rampage: The First Dance inside The United Center in Chicago. The buzz and excitement were at an all-time high as the return of CM Punk to professional wrestling filled wrestling fans worldwide with joy. As soon as “Cult of Personality,” the wrestling world erupted as Punk was indeed back and somehow, despite being gone for so long, made it feel as though he never left. Punk was back in the driver’s seat of pro wrestling and Page, on the other hand, was out of action after an attack by The Elite. Just like that, the darling of wrestling fans’ eyes shifted to the Punk. Or so we thought.

Nov. 13, 2021. Full Gear. The moment AEW fans were desperately waiting for. In the main event, Hangman Page finally achieved his goal of becoming AEW World Champion in the main event when he defeated former tag team partner Kenny Omega. It was a celebratory moment that felt earned, that felt justified, and simply just felt right. Page was the one flying the flag of AEW and has done it the only way he knows how. Meanwhile, CM Punk had his second pay-per-view match on the show, taking on Eddie Kingston in a match that somehow developed more bad blood than any feud in wrestling last year. The win for Punk would be one that really Page had his moment, Punk had his war. Their paths were now on track to meet down the line, one way or another.

May 29, 2022. Hangman Page and CM Punk will go one-on-one for the AEW World Championship at Double or Nothing. The grizzled veteran who has quickly become one of the faces of AEW in short order will challenge Page and has already led to us seeing a version of the world champion we have not seen in a long time. The confidence remains but the worry and understanding that CM Punk has gotten into his head could be what sees Page watch his AEW World Championship slip away. All these dates and moments come to a head in the biggest match in AEW history.

Better Than Ever: CM Punk

CM Punk challenged himself when he walked back into the pro wrestling world. He not only wanted to close the door on his career the correct way but it was going to wrestle again, he wanted to be the “Best in the World” again as well. Punk wanted to show he was still the man he was when he walked away, if not better. Believe it or not, he has been better. The wars that Punk has gone through already with the likes of Eddie Kingston and MJF are some of the most personal and brutal we’ve seen in AEW history. Wins over those two men but also Darby Allin, Dax Harwood, Dustin Rhodes, and Penta Oscuro have allowed Punk to show that not only does he still have it but he’s capable of being AEW World Heavyweight Champion once again. His mastermind style of getting into his opponent’s head is what has gotten him here. Punk has forced wrestlers to fight his fight. Old school, new school, whatever it may be. Punk is putting on a masterclass in pro wrestling rings and will look to do so against Page. 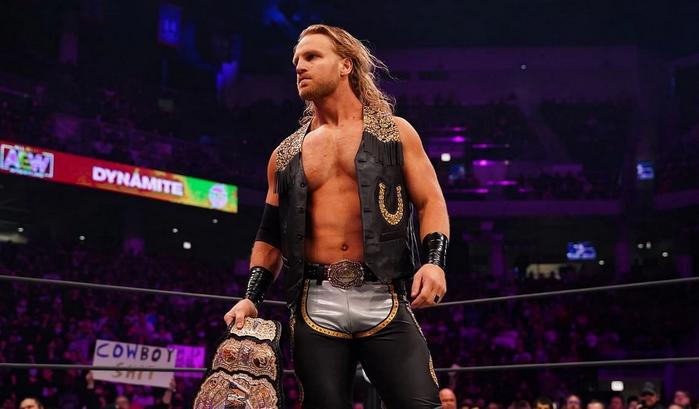 The story of Hangman Page is well-documented. But it’s what he has managed to do since winning the AEW World Championship that is most impressive. Page went to a 60-minute draw with Bryan Danielson in his very first defense before handing Danielson the first loss of his AEW career. Both of those matches not only showed the growth of Page but that no matter who gets in his way, he can hang with the best of them in the squared circle. Page then welcomed a giant into this midst, defeating Lance Archer in a Texas Deathmatch to add the next achievement of beating someone through plunder-filled warfare. The blood, sweat, and tears that Page had in his journey were being shown physically in each and every match he competed in with his title on the line. Page managed to shut up the NXT attack laid upon him by Adam Cole, beating him not once but twice in a normal match and another Texas Deathmatch. Every challenge was head-on by the champion. Never did he let his challengers get into his head and stayed true to himself as the face of All Elite Wrestling. That’ll be challenged Sunday night.

The Biggest AEW Match in History

CM Punk hasn’t been in AEW since day one. He wasn’t there for the first or second year. Hangman Page has. There’s a reason Page was adamant about not only defending the AEW World Championship on Sunday night but the entire promotion against CM Punk. It’s been as good of a story as you will see in wrestling this year. For Punk, he just wants to be AEW World Champion. He wants to be “the guy” once again. For Hangman Page, it’s much more than the title. It’s about everything he has worked for since the inaugural press conference where he said he would be AEW World Champion. Page did the work to be the man and to wave the flag of AEW as high as can be. To be the best world champion in all of wrestling. And if Punk is able to undo all of that by making Page Go To Sleep, then what was it all for?

This is the biggest match in the history of AEW for a reason. It’s as split down the middle as one can imagine. All that is known is someone will walk out of Double or Nothing as the AEW World Champion and the other will walk out asking themselves what went wrong. It’s going to be special.

AEW Double or Nothing 2022 airs live on pay-per-view and Bleacher Report this Sunday night at 8 p.m. EST.