Live from The Showboat in Atlantic City, New Jersey, Game Changer Wrestling will present GCW Life Goes On. This is far from the company’s first appearance in the East Coast venue since it has become something of a home to the independent wrestling powerhouse. However, this makes the upcoming show this Sunday no less important. Life Goes On features everything from Tournament of Survival qualifying matches to a GCW Tag Team Championship defense. Whether you’re attending the show live or planning to watch on FITE, here’s what to know about the action to come before GCW closes out its action in Jersey. 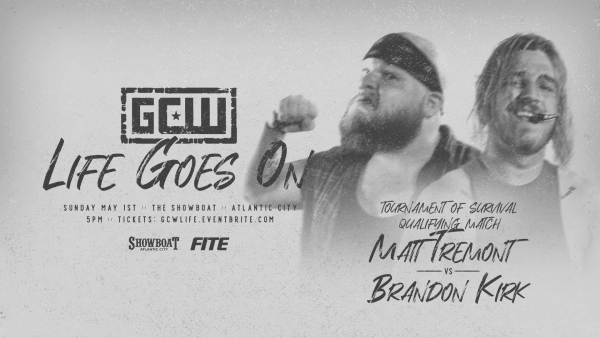 The Tournament of Survival Qualifiers Continue

This year’s Tournament of Survival qualifying matches will begin the evening prior at GCW In Too Deep. The qualifiers in question roll on this Sunday at GCW Life Goes On, with two bouts announced. The first pits “The Different Boy” Jimmy Lloyd against “The Iron Demon” Shane Mercer. Though Mercer has experience in a previous ToS, Lloyd can make the claim of being part of the three of the tournaments in question. Lloyd was especially successful in 2019, making it to the finals before falling to eventual winner Alex Colon. This qualifier is all the more interesting when considering that this parks Lloyd and Mercer’s first singles encounter; while they’ve been involved in multi-person matches in the past, this is the first time they square off one-on-one.

The second ToS qualifying match pits former GCW Tag Team Champion Matt Tremont against New Jersey-born deathmatch enthusiast Brandon Kirk. Tremont is heading into Life Goes On with a chip on his shoulder, especially considering he was unable to defend the aforementioned tag team titles at Joey Janela’s Spring Break 6 Part 1, where the titles were won by The Briscoes. The same can be said for Kirk, who’s coming off a loss to Sawyer Wreck at last month’s Planet Death event. It’s important to note that while Tremont participated in the second ToS, making it to the finals against eventual winner Nick Gage, Kirk will be looking to make his way into his first-ever ToS. Keep your sights set on these men’s first singles match in nearly two years; they last wrestled each other at ICW No Holds Barred in June of 2020. 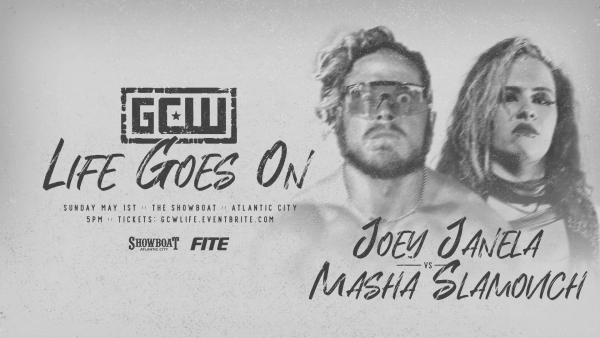 The Bad Boy Meets Russian Dynamite in a First-Time Encounter

Another reason to tune into GCW Life Goes On this Sunday is that it will be the host of a major first-time match. “The Bad Boy” Joey Janela is set to square off with “Russian Dynamite” Masha Slamovich within The Showboat. If there’s one prediction that can be safely made, especially concerning the wrestling styles of the participants involved, it’s that both sides will be willing to take matters to the extreme. Since debuting in IMPACT Wrestling last year, Slamovich has been a featured star in the company’s Knockouts Division. This year alone, she’s picked up victories over the likes of Kaci Lennox, Abby Jane, and Raychell Rose. It may only be a matter of time until she’s holding gold in IMPACT.

Meanwhile, despite being a contracted All Elite Wrestling star, Joey Janela’s time has been largely devoted to Game Changer Wrestling. From Ninja Mack to X-Pac to, more recently, Bandido, “The Bad Boy” wrestled a wide gamut of opponents in GCW. While many may consider Janela to be cocky, his mindset isn’t without merit, as his willingness to take risks has made him incredibly successful. It would seem that Janela’s goal in 2022 has been to test himself against a litany of wrestling styles; this will be no different this Sunday as he squares off with Slamovich. Tune into Life Goes On to see who will have their arm raised by the end of this first-time encounter. 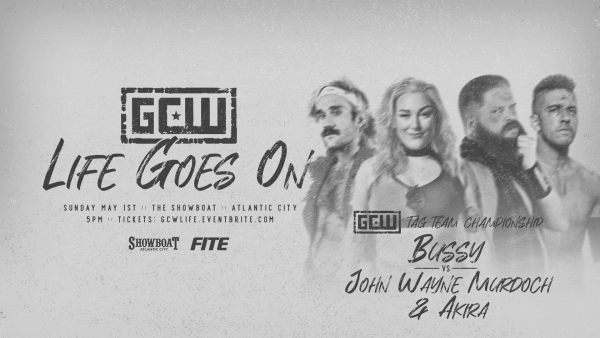 In their latest title defense, BUSSY puts the GCW Tag Team Championship on the line against the duo of John Wayne Murdoch and AKIRA. Allie Katch and EFFY originally won the gold back earlier this month at the company’s Paranoid event, picking up a definitive victory over The Briscoes. With this victory, BUSSY earned their first taste of GCW gold, defeating one of the most seasoned, formidable tag teams in the process. To say that BUSSY is a fan favorite duo in GCW would be an understatement. They built a solid following for not only their combined charisma but the propensity to take any risk necessary to pick up a victory. This Sunday, at Life Goes On, Katch and EFFY will make their latest defense against a dangerous duo in Murdoch and AKIRA.

Murdoch is the current reigning GCW Ultraviolent Champion, having captured the gold from Alex Colon at Joey Janela’s Spring Break 6 Part 1. This was a controversial result, to say the least, and elicited considerable disdain from the GCW faithful in attendance. Murdoch has paid said disdain little mind, keeping hold on the gold ever since. Though the team of Murdoch and AKIRA may seem peculiar to some, it’s important to note their history in The Rejects; this group also includes Satu Jinn and Reed Bentley. Murdoch and AKIRA have the ability to work as a cohesive unit and their deathmatch experience speaks for itself, not only in terms of title wins but tournament victories over the years. Can they capture the GCW tag team titles, halting BUSSY’s momentum in the process?

GCW Life Goes On will take place in Atlantic City, New Jersey on May 1, 2022.

Stay tuned to the Last Word on Pro Wrestling for more on this and other stories from around the world of wrestling, as they develop. You can always count on LWOPW to be on top of the major news in the wrestling world, as well as to provide you with analysis, previews, videos, interviews, and editorials on the wrestling world. GCW Life Goes On is set to air Sunday at 5 PM EDT on FITE. Tickets are also available via Eventbrite.