Believe it or not, WrestleMania 38 begins Saturday night. Called “The Most Stupendous Two-Night WrestleMania in History,” WWE has put together a two-night event that carries the excitement of a usual WrestleMania in some ways but not others. WrestleMania Saturday consists of both women’s title matches, a surprise match for Seth “Freakin” Rollins, and the return of “The Texas Rattlesnake.” Here’s a look at the card along with predictions for the major matches of the night.

Seth “Freakin” Rollins vs. An Opponent of Vince McMahon’s Choosing

Seth Rollins‘ quest to get his WrestleMania moment was completed Monday as Vince McMahon guaranteed him a match at “The Grandest Stage of Them All,” citing that it can’t be the most “stupendous” WrestleMania in history without Rollins on the show. The twist to it all, of course, comes with McMahon not revealing to Rollins who he will be facing come WrestleMania Saturday. McMahon added it will not be known until Rollins is in the middle of the ring and ready to compete. The obvious rumor swirling around is former AEW star Cody Rhodes being the one to answer the challenge of Rollins. Rhodes has not been on AEW television since January 26, when he lost the TNT Championship to Sammy Guevara in a Ladder Match.

“The American Nightmare” would be a major addition to the WWE roster and a perfect opponent for Rollins, who is chasing the WrestleMania moment. There’s a ton to still be revealed as to whether or not Rhodes will be more of his AEW self than his “Dashing” persona in his previous time with WWE, but that’s part of the excitement. 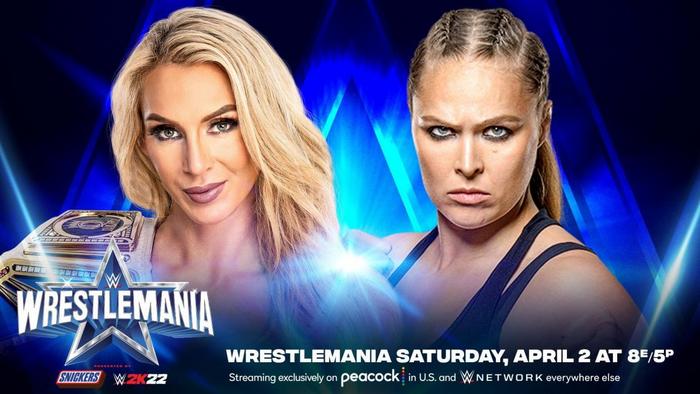 Charlotte Flair defends the SmackDown Women’s Championship against Ronda Rousey in what could be the main event of WrestleMania Saturday. Flair has been the champion since SummerSlam in August (which was the Raw Women’s Championship prior to the swap following the WWE Draft). Rousey won the 2022 Women’s Royal Rumble match to guarantee a title match at WrestleMania. Many believed it would be Rousey picking her rival in Becky Lynch but she opted for Flair instead. These two are no strangers to one another. They wrestled in singles action at Survivor Series in 2018. It was a vicious encounter that saw Rousey gain the victory as Flair got purposely disqualified. Before the DQ, it was probably the best match of Rousey’s short WWE.

The build to this match has not been as great as someone would hope. Flair has been doing her best to try and make Rousey tap but has failed in doing so, making the likelihood of her walking out #AndSTILL feeling more unlikely by the day. “The Baddest Woman on the Planet” didn’t return to WWE to lose. Sure feels another title reign is in her future. 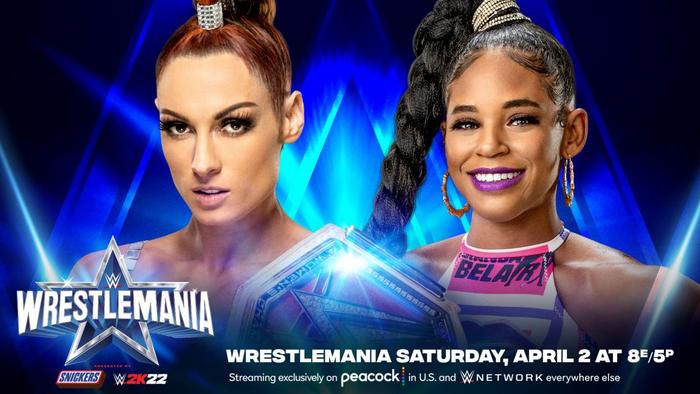 A match nearly eight months in the making will finally go down Saturday as Becky Lynch defends the Raw Women’s Championship against Bianca Belair. It may be a different brand now, but the ending to this story between Lynch and Belair felt it needed to be completed at “The Showcase of the Immortals.” Lynch embarrassed Belair at SummerSlam to take the SmackDown Women’s Championship. There’s no better way to say it. That match was a complete embarrassment seeing Belair felt as big a deal as anyone heading into the show. Belair then proceeded to fail on a number of occasions, making many believe she’d never get her shot at payback. Enter the Elimination Chamber, where Belair managed to outlast five women to win the match and get her opportunity at WrestleMania against “Big Time Becks.”

It has been an escalation of sorts since with the most recent episode of Raw being the line. They injured each other over the last month but Belair got the final laugh when she cut off the hair of Lynch to embarrass her and get the mental edge. Lynch vs. Belair has all the makings to be another WrestleMania main event for both women but even if it’s not, expect them to go out there and put on one of the best matches of either night.