Coming up on only their fourth show, Pro Wrestling GRIND has some returns, some debuts, and some win-loss records which are at stake at Gods & Monsters! Every match is full of competitors ready to take the fight to each other and nearly every match feels like it could close out the show as well. This is the peak of pro wrestling; this is Pro Wrestling GRIND! 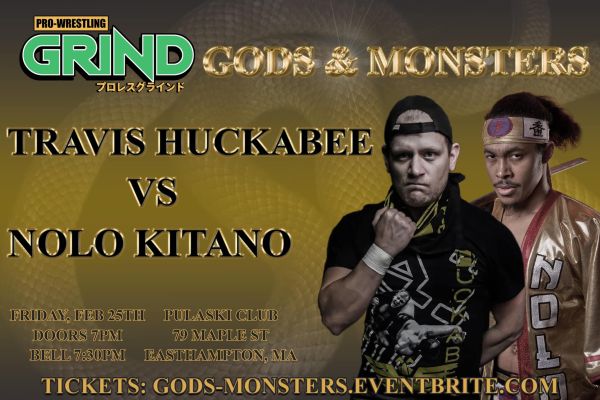 Travis Huckabee has been an interesting character inside of Pro Wrestling GRIND. While he lost his first match to Rip Byson, Huckabee then went on to defeat both Myung Jae Lee and Perry Von Vicious in brutal matches. Nolo Kitano has only appeared in GRIND once and it was a loss to Vicious, so the transitive property in math dictates that if Vicious can beat Kitano and Huckabee can beat Vicious, then Huckabee should be able to beat Kitano.

However, there is something inside Travis Huckabee where he lost to Rip Byson and has that on his record; this could be a vulnerability that Nolo Kitano capitalizes on. Kitano is also sitting at 0-1, which means a loss here could feel like being in a hole that becomes more difficult to dig out of. Kitano is going to have to fight with every ounce of his being not just to defeat Huckabee but score that ever important win. 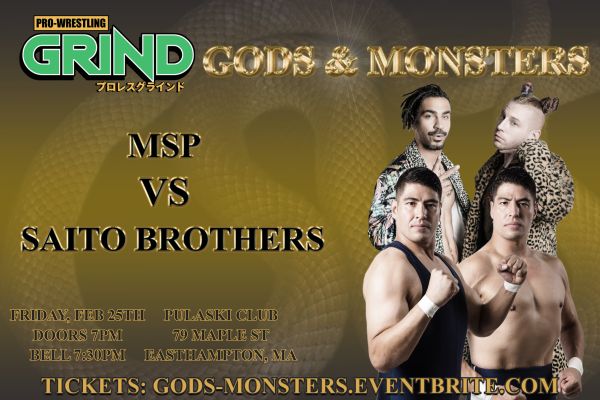 Fun Fact: MSP are the only tag team to appear on all three GRIND shows thus far and now, also, the fourth. With losses to The Mane Event and Milk Chocolate, MSP also has a victory over Culture Inc. This makes everything in the tag team division of GRIND so much more exciting because now, MSP is facing the debuting Saito Brothers from All Japan Pro Wrestling. While the Saito Brothers could be studied via the internet, their wrestling hasn’t been in the same promotions as MSP and other teams on this show, so they could be somewhat of a wild card in that regard. The Saito Brothers are going to use their size to their advantage, along with their AJPW training, becoming one of MSP’s toughest matches to date. 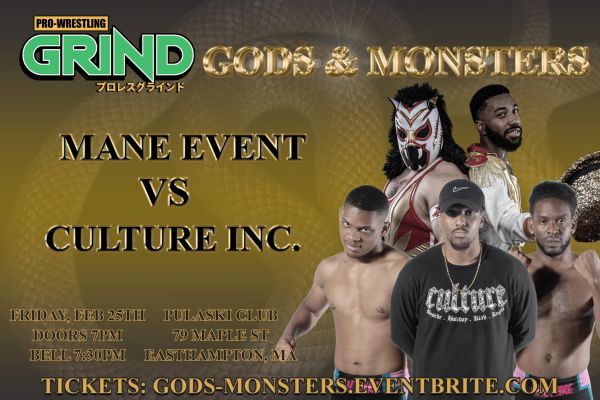 While The Mane Event are undefeated in GRIND- the only undefeated tag team- they also would not suffer as much from a loss and going 2-1 as it would seem if Culture Inc was to end up 0-2. Culture Inc is coming back to GRIND and it would be assumed that they’re coming back with winning on their mind. This is going to be a different type of fight than the other tag team match on the show, but it is going to be a terrific fight nonetheless. 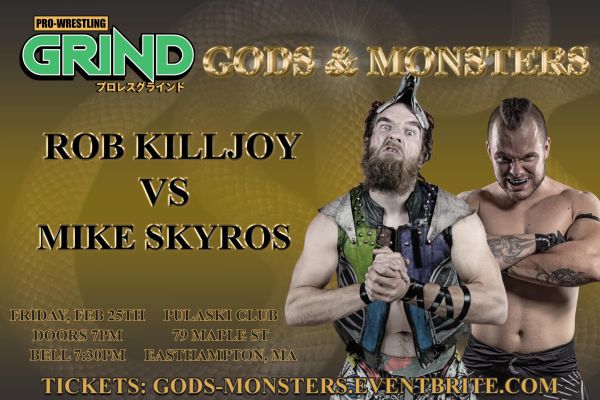 Two wrestlers debuting in GRIND, Rob Killjoy and Mike Skyros seem like perfect fits for the company. Since the first show, fans have been asking for Skyros to appear inside of a GRIND ring. Known for strikes and toughness, Skyros and Killjoy are not that different except for experience. Killjoy could use his veteran mindset to win this match- as he has stood across that ring from some of the best in the world today and held his own against them.

At the same time, Skyros is the definition of hungry. What is he best known for? He has had title reigns in local promotions in New York and Connecticut, but in the broader sense, his biggest match in terms of exposure was perhaps as part of Camp Leapfrog on IWTV. With this GRIND match having that same level of exposure (or perhaps more so), this will be that type of match where fans might not be familiar with the name Mike Skyros but after this match, you can bet that he will make sure they are. 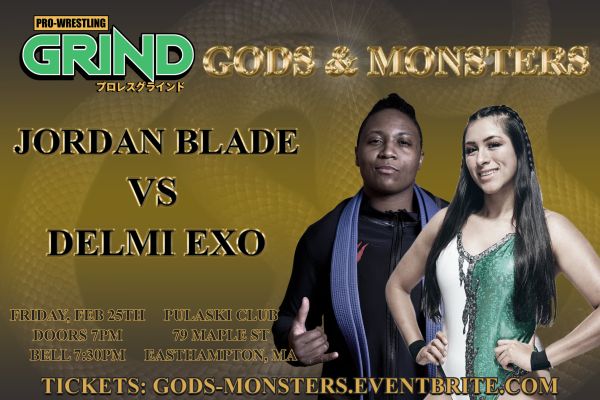 Jordan Blade is also returning to GRIND after last appearing in November for You Better Run with a loss to the undefeated Davienne. This brings Blade back in looking to secure that win and that will be a tough challenge because on the other side of that ring will be Delmi Exo. Typically, someone such as Blade could just study any number of Delmi Exo matches and try to create a game plan but this is not the same Exo since we last saw her as part of the Sea Stars.

Delmi Exo has changed her approach to being in the ring and she now has a style that is going to clash with Jordan Blade, creating not only an exciting match but a challenge for Blade. One of the few matches which exist with this revitalized Delmi Exo is against Little Mean Kathleen at WWR+ from almost two weeks ago now, but one match isn’t really enough to base an entire strategy on. Exo might very well surprise all of us at Gods & Monsters. 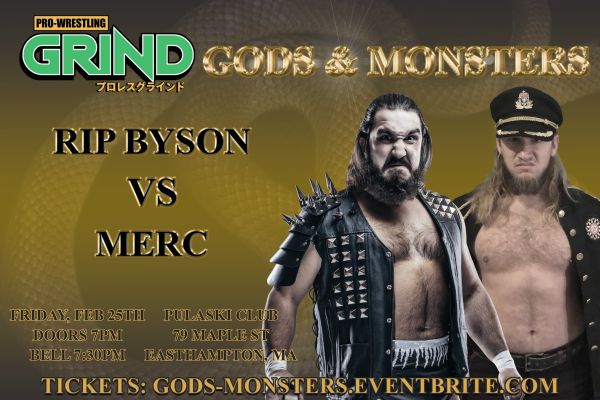 At the debut GRIND show, Who Made Who, Merc came in and had a hard-fought loss to Logan Black where they destroyed the Pulaski Club. While that match broke down into somewhat of a street fight, Merc will have a different challenge against Rip Byson, as this one won’t need to get hardcore: Byson is his own weapon. With victories over Travis Huckabee, Jay Freddie, and Warhorse, Byson is the only singles wrestler in GRIND other than Davienne to be 3-0.

Much of this show feels like it is about the wrestler (or tag team) that is 0-1 and looking for that win. Merc has been in that big match situation before and comes out with the win. This has been true in matches against the likes of Cabana Man Dan, Tank, and Damyan Tangra more recently, but Merc has also been holding the TWE title for about six months now. This match is going to come down to the will to fight another day as both wrestlers will leave it all out in the ring. 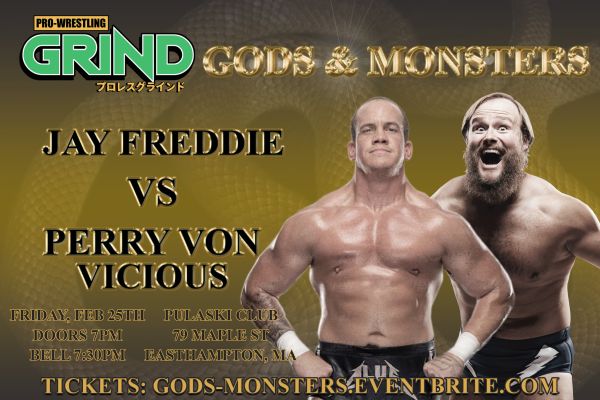 In what is perhaps one of the most intriguing matches just on paper, Jay Freddie has had two matches in GRIND- a hard-fought loss to Rip Byson and a win over J.D. Drake. Perry Von Vicious has had victories over Milk Chocolate and Nolo Kitano, mostly recently losing a bloody battle to Travis Huckabee. Not only do the win-loss records and level of opponents these two wrestlers have faced before line up so evenly, but it can also be stated that they are tough as nails. In other words, this is going to be a battle of sheer willpower.

Both of these wrestlers are capable of the technical side- such as throwing a suplex- and the size difference would not be an issue for Freddie. But the fact is that both of these wrestlers could just as easily inflict as much punishment on the other as they can take. For either of them, this might feel like simply trying to defeat a brick wall and whoever wins this match will just end up being the stronger brick wall at Gods & Monsters.

No one has had a more interesting time in Pro Wrestling GRIND than perhaps Logan Black. Sitting at 2-0 (undefeated, but not 3-0), Black scored wins over Merc and Ryan Galeone. That type of determination that brought Black to 2-0 is going to be very much needed as he faces his literal biggest test to date in the debuting O’Shay Edwards. When it comes to the show name of Gods & Monsters, O’Shay Edwards might be both.

Few wrestlers out there can feel as if they are on the same level as O’Shay Edwards and you just know that he’s coming to Easthampton, Massachusetts to make a statement. If anyone can weather the storm of “The Big Bad Kaiju,” it would be Logan Black, but this might be even too much for him to overcome. This match might not only take everything out of both of these competitors but leave a part of Easthampton not the same ever again.