It may be the middle of the week, but Gatoh Move Pro Wrestling seems to be getting a head start on this week’s action. Enter ChocoPro #203, an episode focused specifically on multi-person action. In addition to a tag team opening contest, viewers will witness a main event three-way match. As is always the case, the action will be streamed live via the official Gatoh Move YouTube channel before being made available to the public on demand. Here’s what to expect. 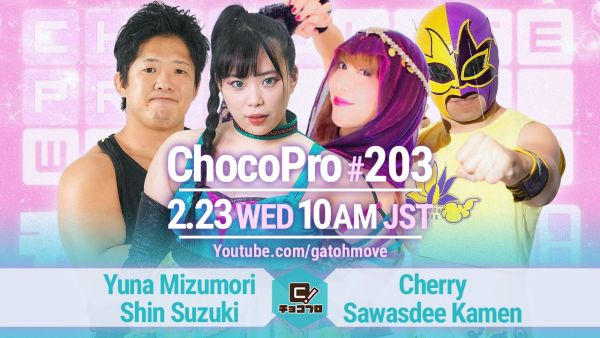 Yuna Mizumori and Shin Suzuki vs. Cherry and Sawasdee Kamen

Kicking off ChocoPro #203 will be the duo of Yuna Mizumori and Shin Suzuki taking on Sawasdee Kamen and the veteran joshi wrestler herself, Cherry. Per Emi Sakura, it’s been announced that Suzuki will be a regular ChocoPro member moving forward. This has been a well-earned distinction, too, as his spirited demeanor fits the show’s upbeat vibe incredibly well. He’s also proven himself as an intense, passionate fighter, digging deep in various match types. On this episode, he has the opportunity to pick up an essential win alongside the tropical powerhouse in “Yunamon.”

Sawasdee Kamen is coming off a loss from the episode prior. Thus, it goes without saying that he’s entering ChocoPro #203 with the intent to win. Much like Suzuki, however, Kamen has a solid chance of doing so. He will be teaming with Cherry, who has not only made multiple ChocoPro appearances but is a seasoned women’s wrestler in her own right. So far, in 2022, she’s been seen in PURE-J, Ice Ribbon, and elsewhere. However, this episode marks her first Ichigaya Chocolate Square appearance this year, which makes this match just as important for her as it is for her opponents. 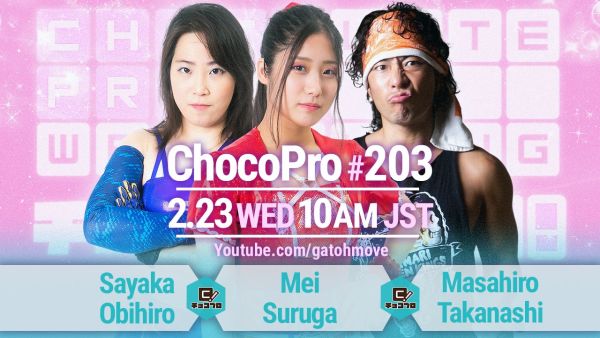 On the previous episode of ChocoPro, Masahiro Takanashi picked up a tag team victory alongside Chon Shiryu against the duo of Chie Koishikawa and Sayaka Obihiro. This match wasn’t without its bumps in the road, however. To be more specific, during the course of the action, “Chiezo” suffered a dislocated finger; it’s expected that she will be back in action in due time. On ChocoPro #203, both Takanashi and Obihiro will compete in the main event. However, they must be at the top of their game as Mei Suruga, one-half of the Asia Dream Tag Team Champions, will also be in action.

“Mei-chan” is coming off her own victory from the previous episode; alongside Baliyan Akki, she bested the duo of Yuna Mizumori and Sawasdee Kamen. This was a hard-fought victory, to be certain. It’s evident to the ChocoPro faithful, though, that Best Bros have their sights set on Takanashi and Chris Brookes, collectively known as Calamari Drunken Kings. Their rematch for the Asia Dream tag team titles is scheduled for ChocoPro #204, which will kick off this weekend. Before this show takes place, can Suruga come out victorious in this three-way contest, giving her team the edge?