DEFY Wrestling returns to Washington Hall in Seattle, WA on February 12th to celebrate their 5th-anniversary show, Year 5! There are several huge title matches and a good old-fashioned grudge match, and as always there are also a few surprises in store. Jonathan Gresham, Trey Miguel, and Liiza Hall will all be making their DEFY debuts. You never know who could show up to celebrate with the DEFYance at Year 5! 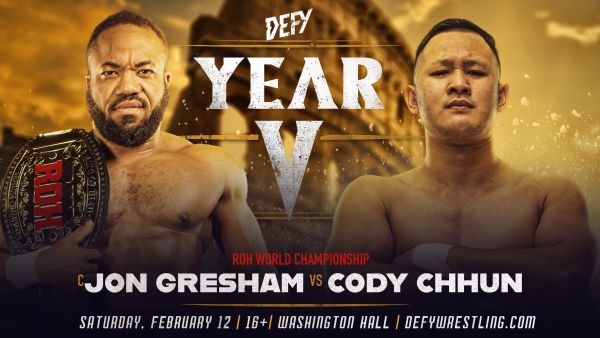 The Foundation comes to DEFY Wrestling as Jonathan Gresham makes his debut. Along with him, he is bringing the Ring of Honor World Championship, fresh off a pair of successful title defenses against Chris Ridgeway and Steve Maclin. Since winning the title at ROH Final Battle, Gresham has been the definition of a fighting champion. He’s defended it across many companies, including Game Changer Wrestling, IMPACT Wrestling, TERMINUS, PROGRESS Wrestling, and you can now add DEFY to that list. He will be defending that title against “Classic” Cody Chhun, someone who had been a mainstay for DEFY Wrestling and a rising star in his own right. Now, Chhun lost a ‘Loser Leaves DEFY’ tag team match back in September 2021, so how is he able to compete here? This is technically a Ring of Honor sanctioned match as their world title is on the line. Chhun has not allowed this to take his career off track though, having appeared for NJPW STRONG and All Elite Wrestling thus far in 2022. Will Chhun take home gold at Year 5 or will The Octopus keep the title in his grip? 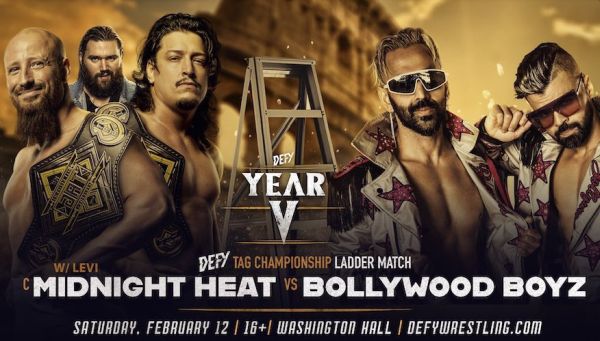 At DEFY Dark Horse in December 2021, the Bollywood Boyz made their much-anticipated debut. They were able to take the champions to the limit and pick up the win, albeit via disqualification. This is also the first mark in the “L” column for Midnight Heat in DEFY. The hatred that has been brewing between the two teams on social media has reached a new level. At Year 5, Midnight Heat will defend the DEFY Tag Team Championship in a ladder match! Can the Sihra brothers keep the momentum going and wrest the gold away? We’ll find out on February 12th! 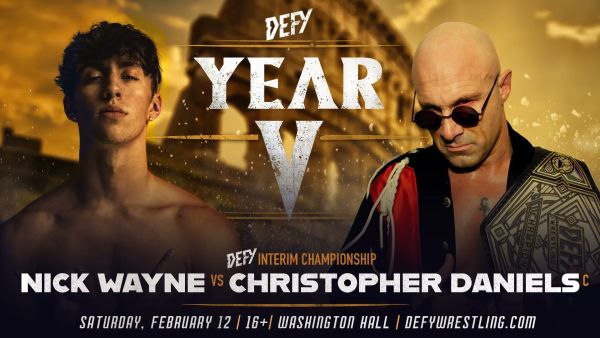 This will be Christopher Daniels‘ first defense of the DEFY Interim Championship since winning it back in December 2021. We also get to witness the first-ever encounter between “The Fallen Angel” and the Pacific Northwest prodigy, Nick Wayne. Since returning to DEFY in 2021, Daniels has stacked up a nice series of victories over Titus Alexander, Daniel Garcia, and Brody King. Wayne has been a regular for GCW, appearing in many events for them beginning in August 2021. This includes GCW branded shows and one of their new ventures called LA Fights. He also continues to move up and down the West Coast, competing for promotions such as Violence x Suffering, West Coast Pro Wrestling, Without a Cause, and 5CC Wrestling, among others. Daniels comes into this match not only with the champion’s advantage but that of experience as well. Nick Wayne has possibly the biggest opportunity of his young career right before his eyes at Year 5!

If you are unable to attend DEFY Year 5 in person, it will be available later on as part of DEFY on Demand and Powerslam. TV! This event is 16 and over and there are updated COVID-19 protocols in place. If you are attending this event, please give it a look over so you don’t miss out!