This Saturday, the National Wrestling Alliance returns to Valor Hall in Oak Grove, Kentucky. In conjunction with Tried-N-True Pro Wrestling, the two promotions will hold the supercard known as NWA PowerrrTrip. This will be the latest in the series of NWA Pop-Up Events, illustrating partnerships with independent companies to bring wrestling events to certain areas. The last of said series took place this past October with NWA By Any Means Necessary, which was highlighted by a Steel Cage Match between rivals Crimson and Jax Dane. PowerrrTrip will take place this Saturday; ticket information can be found below. It will also air on FITE at a later date. Here’s what to expect. 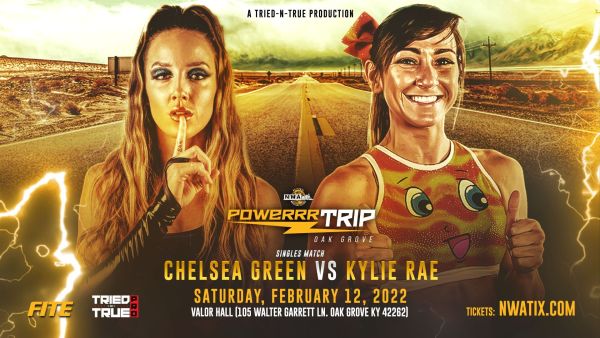 As newlyweds, the Cardonas will be in action come NWA PowerrrTrip. In one of the preliminary matches, “The Hot Mess” Chelsea Green takes on “Smiley” Kylie Rae. Since making her NWA debut last year, Rae has become one of the standout women’s wrestlers in the promotion, capturing the attention and adulation of fans due to her cheerful disposition and resilience. She’s also found herself in contention for not only the NWA World Women’s Tag Team Championship but the World Women’s Championship as well. One can only assume that it’s only a matter of time until the “Smiley” one is holding gold, especially given the momentum she’s been enjoying in 2022 so far. This Saturday, however, she’ll have to overcome a major challenge to ensure said momentum continues.

Enter Chelsea Green, who’s made an impact in the NWA in quick fashion. She debuted for the company at this past August’s all women’s EmPowerrr event, winning the main event Women’s Invitational Cup gauntlet. Though she failed to unseat Kamille for the World Women’s title the following evening at NWA 73, Green had a solid showing. It’s important to note that “The Hot Mess” hasn’t been seen on NWA programming since the August 30 edition of NWA Powerrr; one has to wonder if there is any rust that could keep her from picking up the victory here. If Green does, it may spell the beginning of a banner evening for the Cardonas. 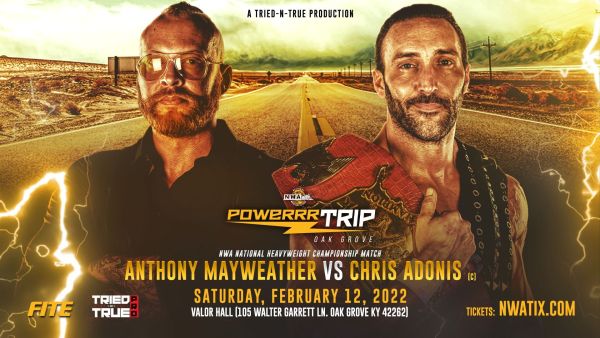 NWA PowerrrTrip wouldn’t be a Tried-and-True affiliated event without the man in charge of the latter. Formerly known as Crimson, Anthony Mayweather is the Owner and Founder of TNT Wrestling. Having formed the company in 2015, Mayweather and his team trained many wrestlers from the ground up, ensuring that they had the foundation needed to become stars in the professional wrestling industry. It should come as no surprise, then, that Mayweather would be involved in PowerrrTrip in some form or fashion. The fact that it will be in contention for the NWA National Heavyweight Championship is nothing short of notable, but if he expects to leave Oak Grove with the gold, he will have to put his absolute best effort forth.

“The Masterpiece” Chris Adonis has held the NWA National Heavyweight Championship for over 270 days across 2 separate reigns, both kicking off in 2021. Adonis’s second reign began this past July following the finals of a tournament for the vacant title. Since then, from Judais to “The Cowboy” James Storm, Adonis kept his grasp on the title more than secure. “The Masterpiece” is likely to feel confident heading into this match, not only because of his current status as champion but his association with Strictly Business, the latter of which may come into play this Saturday. See who leaves with the National Heavyweight title around their waist at PowerrrTrip. 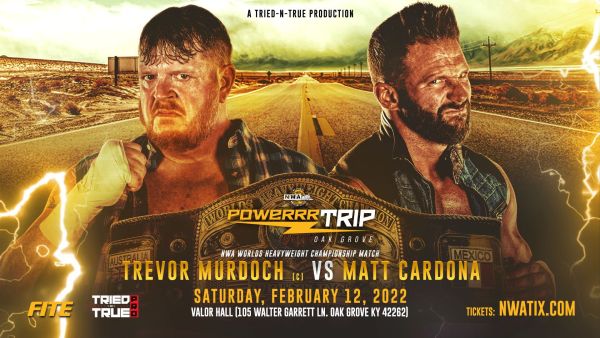 The Deathmatch King Sets His Sights on Gold

As the cliche goes, the time for talk is over – this Saturday, at NWA PowerrrTrip, Matt Cardona challenges Trevor Murdoch for the NWA Worlds Heavyweight Championship. This grudge began following the main event of Hard Times 2, which saw Murdoch successfully defend the title against Mike Knox. Following this, Cardona made his surprise NWA debut, seemingly coming out to congratulate the blue-collar titleholder. Moments later, with “The Ten Pounds of Gold” in his grasp, the “Alwayz Ready” Cardona stood above the fallen body of Murdoch. Cardona joined forces with Knox, who was still vying for the title, but it was evident to fans watching that the self-proclaimed “Deathmatch King” wanted the gold for himself. En route to this Saturday’s show, Cardona has done little to endear himself to the NWA faithful.

In the weeks following Hard Times 2, Cardona verbally ran down the NWA, calling the company “boring” and “dated.” He expressed an interest in injecting new life into the company, which did even less to ingratiate himself into the company. Meanwhile, Murdoch wasn’t keen on running his own mouth. Instead, as the brawler he prided himself on being, he wanted to fight. Since capturing the worlds title, Murdoch became the flagbearer for the National Wrestling Alliance. Thus, he didn’t take kindly to Cardona’s dismissive comments. One question remains: will Murdoch leave Valor Hall still the NWA Worlds Heavyweight Champion? Since his release from WWE in 2020, Cardona captured gold in such organizations as IMPACT Wrestling and Game Changer Wrestling. It wouldn’t be farfetched to see him add the NWA worlds title to his collection as well.

Stay tuned to the Last Word on Pro Wrestling for more on this and other stories from around the world of wrestling, as they develop. You can always count on LWOPW to be on top of the major news in the wrestling world, as well as to provide you with analysis, previews, videos, interviews, and editorials on the wrestling world. Tickets for NWA PowerrrTrip are available via SimpleTix. A broadcast taping of the event will also air on FITE.