Wrestle Kingdom 16 will come to a close this Saturday as it will be New Japan Pro Wrestling (NJPW) competing against Pro Wrestling NOAH in a special 11-match card. There will be faction warfare, friends going head to head, and legends competing for the first time in a long time. When NJPW and NOAH came together for this show, it was for the love of pro wrestling. As we saw on night two of Wrestle Kingdom, NOAH is united to show that they are better than NJPW. It should be a night of special action that may very well lead to more work between the two promotions moving forward. Check out our Wrestle Kingdom 16 preview for NJPW vs. NOAH.

This was a joint preview between NJPW lead writer Scott Edwards and NOAH co-lead writers Michael Hymantor and Xavier Williams.

This is a unique matchup as both SHO and Atsushi Kotoge often found themselves opposing each other in tag matches. Of course, this was during the old NOAH and NJPW partnership so that was young lion Sho Tanaka. Facing a Kotoge that was almost at junior ace status in some regards, and eventually would move up to heavyweight before returning back to the juniors. However, a lot of things have changed about his opposition in SHO. In some ways, he is rather similar to Kotoge.

Started out in a hot junior heavyweight tag team that captured the hearts of everyone. Then struck out on his own because he wanted to achieve more than what he was in that tag team. ‘Murder Machine’ SHO is not the same Sho Tanaka that Kotoge met that fought hard until the end. This SHO will do anything to win and will try to overpower Kotoge at any given time. Though with Kotoge’s experiences as a heavyweight and being a taller junior, they will clash pretty evenly. We have SHO winning here, as Kotoge is a perfect babyface coil that NJPW doesn’t have that could get this heel SHO to the next level. — Xavier Williams

This was originally the match that had KENTA joining Takashi Sugiura and Kazushi Sakuraba representing NOAH. Unfortunately due to a series of injuries, KENTA is out, forcing Sugiura-gun to find a mystery partner to fill in. This match has one of the deeper stories going back to the dark Suzuki-gun invasion of NOAH years back. Sugiura was one of the first big names to defect to Suzuki-gun. Sugiura wreaked havoc over his home promotion alongside the likes of Minoru Suzuki, Taichi, and TAKA Michinoku. Suzuki and Sugiura had three absolute wars during Suzuki-gun’s invasion. We could see that spark reunited here.

It’s also deja vu as many felt Suzuki-gun’s invasion of NOAH almost killed the company and definitely strained the relationship between both sides. Sugiura since then started his own army in NOAH joined by Kazushi Sakuraba and many others. It’ll be fun to see Sugiura square off with Suzuki, as well as the MMA legend Sakuraba, who has recently let it be known that he plans to exchange kicks with Toshiaki Kawada’s disciple, Taichi. For X, the safest picks would be Kazuyuki Fujita and Kendo Kashin. While Kashin would make the match even and square off with Michinoku, Fujita is a former IWGP Heavyweight Champion, and one of the last Inokiism practitioners left. — Xavier Williams

The man who claims “I am NOAH” will team with Masa Kitamiya to take on the controversial House of Torture duo of EVIL and Dick Togo. There’s some interesting history here in this match as Dick Togo competed in NOAH’s Global Junior League in 2020 before making the jump over to become EVIL’s right-hand man in NJPW. Seeing that few have had an answer for the tactics of EVIL and Togo in NJPW, this could be a long night for Kitamiya and Go Shiozaki. The interesting factor in this match will be how the devastating duo of Kitamiya and Shiozaki as they have almost always been at odds but want to see NOAH shine more than anything. There’s tons of talent in this matchup but as long as House of Torture can be grounded, it feels like NOAH’s to win. — Scott Edwards

In the mid-2010s, one of the defining factions of Pro Wrestling NOAH was Suzuki-gun. It was a faction that dominated NOAH for a few years with its ever-expanding roster. When Suzuki-gun left NOAH, it led to a different era for the company with half of the roster leaving for NJPW in 2017 — most notably some of NOAH’s best workers such as their first junior champion, Yoshinobu Kanemaru. Someone who many consider as one of the first aces of that division. Kanemaru tags with Zack Sabre Jr. to face Naomichi Marufuji and Yoshinari Ogawa.

The history of all of these men goes back to NOAH as well. Before NJPW, Sabre Jr. wrestled in Pro Wrestling NOAH. He had a five-year stint there, where he would be part of the junior tag team scene with his former partner Ogawa. Marufuji and Ogawa will be reviving their old faction WAVE for this match. It should be interesting to see how Ogawa and Sabre Jr. react with each other. — Michael Hymantor

In terms of in-ring history, nobody from LIJ has been a roster member of Pro Wrestling NOAH. Since the beginning, one of the earliest focuses was Shingo Takagi and Katsuhiko Nakajima. At the time, Takagi was the IWGP World Heavyweight Champion but lost the champion on night one of Wrestle Kingdom, forcing LIJ to head into the match with no gold in their ranks. The same can’t be said for Kongo. Kenoh and Nakajima both hold the top prizes of the heavyweight singles division with Kenoh as the GHC National Champion and Nakajima as the GHC Heavyweight Champion.

When looking at the potential here, there is a lot of hype for Tetsuya Naito and Kenoh to face off as the two leading members of the faction. Hiromu Takahashi and BUSHI are going to fight Aleja and Tadasuke which is a showcase of junior action. Meanwhile, Manabu Soya and SANADA have a history going back to WRESTLE-1. It’s truly an interesting tag team match. Kongo has the momentum and heart to fight NJPW. It really depends on if LIJ can mount the offensive and prove they are the most dominant faction in Japan. — Michael Hymantor 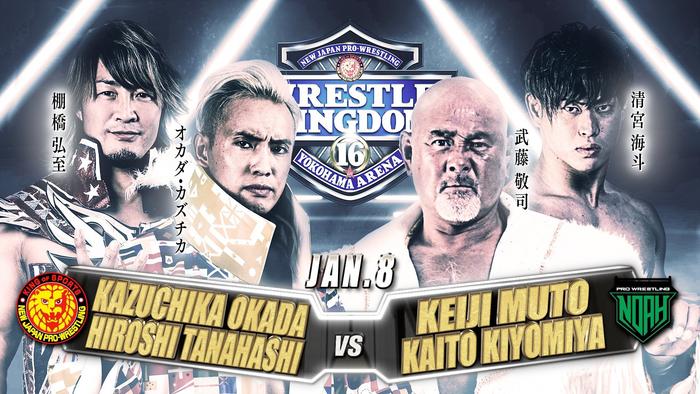 Kaito Kiyomiya will get his wish on Saturday night as he will finally get to compete against Kazuchika Okada. The fact that there will also be two all-time legends teaming with these two only makes it that much better. It has been a busy week for both Okada and Hiroshi Tanahashi, as they left the first two nights of Wrestle Kingdom 16 with championship gold. Okada of course defeated Shingo Takagi and Will Ospreay on back-to-back nights, walking out as IWGP World Heavyweight Champion. Tanahashi, on the other hand, went to war with KENTA in a No DQ match, defeating him and taking the IWGP US Heavyweight Championship in the process.

Keiji Mutoh and Kiyomiya have different weeks to their name as Mutoh managed to successfully defend his GHC Tag Team Championship alongside Naomichi Marufuji at NOAH The New Year while Kiyomiya was knocked out cold by Kenoh in his GHC National Championship challenge. It is the young Ace of NOAH getting his chance to shine alongside Mutoh and against Okada and Tanahashi. It does not get much bigger than this for Kiyomiya and it should be a special main event to cap off a one-of-a-kind show. — Scott Edwards

Stay tuned to the Last Word on Pro Wrestling for more on this and other stories from around the world of wrestling, as they develop. You can always count on LWOPW to be on top of the major news in the wrestling world, as well as to provide you with analysis, previews, videos, interviews, and editorials on the wrestling world.  You can rewatch all 2021 NJPW events and plenty more tremendous wrestling content from New Japan Pro-Wrestling on NJPWWorld.com; The King of Sports Streaming. You can watch Pro Wrestling NOAH as well as DDT, TJPW, and more on Wrestle Universe and ABEMA.