With the New Year comes a new era in professional wrestling and Game Changer Wrestling intends to kick off 2022 with a bang. Enter GCW Die 4 This, which will see the company return to Showboat Atlantic City in New Jersey. While it may go without saying, this will be a proving ground for several wrestlers, as they will look to make the best impression that will lead to brighter things throughout the year. Without any further delay, let’s take a closer look at all the action set for this Saturday. 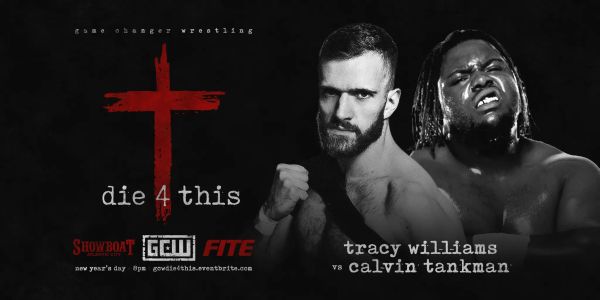 The first match officially announced for GCW Die 4 This pits “Hot Sauce” against “Heavyweight Hustle” in what promises to be a grueling encounter. Fans of Ring of Honor, prior to the organization’s ceasing of operations, will be very familiar with Tracy Williams. As a fixture in said organization’s Pure Division, Williams saw ample success as a member of The Foundation. Specifically, he won the ROH World Television and World Tag Team Championships on separate occasions, not to mention picked up victories over fellow Pure competitors such as Fred Yehi and current All Elite Wrestling star Jay Lethal. This Saturday, Williams makes his GCW return against a first-time opponent.

Calvin Tankman has had an eventful 2021 on the independent wrestling scene, so it should go without saying that he aims to make 2022 a bigger year. Among the organizations he’s competed for include Paradigm Pro Wrestling, IWA No Holds Barred, and Major League Wrestling. With that said, the powerhouse hybrid athlete from Indiana has made arguably his biggest impact in GCW, competing in over 15 of the company’s events throughout the year. From his performance in The Acid Cup 3 to victories over the likes of Colby Corino, Brayden Lee, and Ruckus, Tankman’s dominance speaks for itself. A successful 2022 begins with a victory, though, and Williams is as fierce an opponent as any other. 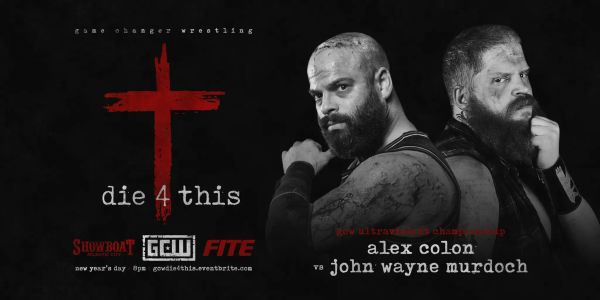 The Ultraviolent Title Will Be Defended

Also scheduled for GCW Die 4 This is a major title match. To be more specific, Alex Colon is set to defend the GCW Ultraviolent Championship against a match he’s found a rival in, John Wayne Murdoch. This rivalry took shape this past November following the main event of the Nick Gage Invitational 6. Colon won the tournament, as well as the title, but instead of celebrating, he was laid out from behind by a returning Murdoch. Following the attack in question, Murdoch took umbrage with “being a bridesmaid, but never a bride,” believing he was held back from achieving greatness. He directed his ire toward Colon and, perhaps more importantly, the GCW Ultraviolent title.

This isn’t to say that Murdoch hasn’t seen success throughout his career. In GCW alone, he is a former Tag Team Champion, having won the gold in 2017 alongside Reed Bentley. This doesn’t even begin to touch on his other accomplishments, including 6 IWA world title wins. It’s important to consider, though, that a singles match against Colon is a new challenge. They’ve faced off a few times since 2017, though these were tag team encounters. Not once have they ever shared the ring as two competitors, which will finally take place this Saturday. Will “The Duke of Hardcore” seize the GCW Ultraviolent Championship or will it be “The Best of the Best” that leaves Atlantic City with the gold intact? 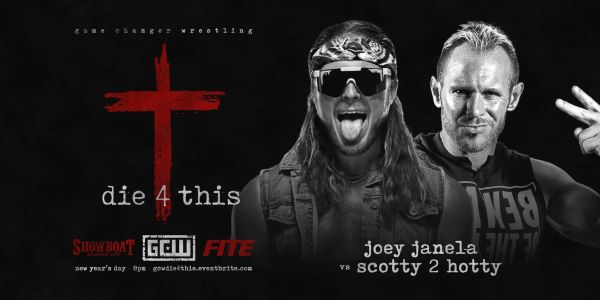 One of the most surprising announcements for GCW Die 4 This was that Scotty 2 Hotty would be making his Game Changer Wrestling debut at this event. This past November, he requested his release from WWE; by that point, he had been working as a trainer at the Florida-based Performance Center. Having made his official debut in 1989, Scotty is nothing short of seasoned, winning two WWE tag team titles alongside his Too Cool teammates Rikishi and the late Grand Master Sexay. However, Scotty has seen singles success, not only as a former WWE Light Heavyweight Champion but within independent organizations including Coastal Championship Wrestling and New England Wrestling Association. Fans may know him best for his signature maneuver, “The Worm,” which seldom failed to get crowds involved. This Saturday, he enters uncharted territory in GCW.

It’s not as if Scotty will have the night off, as he will go head to head with “The Bad Boy,” Joey Janela. Looking back, 2021 has been a whirlwind year for Janela in GCW. He tested his mettle against names ranging from ASF to Minoru Suzuki. Furthermore, Janela unsuccessfully put his Spring Break show on the line against Rickey Shane Page at GCW Take Kare in March. This doesn’t even begin to cover his continued work in AEW, specifically against ally turned rival Sonny Kiss. As longtime GCW fans will attest, this independent wrestling powerhouse is “The Bad Boy’s” home. On Saturday, Scotty steps into said home for the first time and it’s fair to say Janela intends to give the veteran wrestler a royal welcome.

Stay tuned to the Last Word on Pro Wrestling for more on this and other stories from around the world of wrestling, as they develop. You can always count on LWOPW to be on top of the major news in the wrestling world, as well as to provide you with analysis, previews, videos, interviews, and editorials on the wrestling world. GCW Til Infinity is set to air Saturday at 8 PM EST on FITE. Tickets are also available via Eventbrite.