On Oct. 27, 2021, Ring of Honor (ROH) revealed that they would release all of their roster members and undergo a rebuild. They will be shutting down at the end of the year following their Final Battle pay-per-view with hopes of returning in their new form come April. There are no guarantees as to whether or not that April date will be happening, so to say that the future is uncertain would be an understatement. All that being said, Final Battle will commence on Dec. 11, 2021, and the main event was made official Tuesday. It will be ROH World Champion Bandido defending his title against Jonathan Gresham. A match that not only is years in the making for Gresham but the perfect exclamation point as ROH goes into their slumber for the foreseeable future.

Gresham leads a group known as The Foundation. It consists of himself, Tracy Williams, Rhett Titus, Josh Woods, and two-time ROH World Champion Jay Lethal. As we know now, Lethal has left ROH for All Elite Wrestling (AEW) and has already made it known that he’s not showing up for Final Battle. This immediate shock meant that one of the two names that still felt institutionalized with ROH over the last five years is gone. That leaves Jonathan Gresham to be the one true “Foundation.” And that’s why, no matter ROH’s future, he must capture the ROH World Championship at Final Battle.

If you have been paying attention, Jonathan Gresham has established himself as one of the best professional wrestlers in the world. The moment ROH announced that it would be releasing its talent, fans got excited for the potential matches that Gresham might have now that he was seemingly out from ROH. While yes, Gresham wrestling competitors like Bryan Danielson, Zack Sabre Jr., and so many others would be incredible, he has never shown to anyone that he was ready to simply leave ROH in the dust. Even after the announcement, Gresham remained quiet outside of announcing his new promotion, Terminus.

Why did he stay quiet? Because it has always been his mission to return ROH to its greatness. To make ROH “Pure” again. As the Pure Champion, he began his mission by having matches that made people notice. A reintroduced his masterclass technical skills match after match, explaining that this was all part of his mission. The moment he lost the Pure Championship to Josh Woods, he explained that it was now time to bring his mission of making ROH pure once again to the next level.

Will @TheJonGresham continue his dominance of the Pure division? Join us live in Philadelphia, on PPV or streaming for HonorClub to find out!

That’s the ROH World Championship. At Honor For All, Gresham furthered those aspirations close to reality when he defeated Brody King in a number one contender’s match. Both of these men have long been believed to be potential ROH World Champions somewhere down the line. There’s no guarantee that either will be but “The Foundation” will not be denied of his destiny.

“As long as I have breath in my lungs… Ring of Honor will be pure.” — Jonathan Gresham

Destiny is a funny thing in wrestling. Oftentimes, those who have a destiny often reach it. But that isn’t always the case for those who are chasing their destiny. Gresham has been chasing his destiny for years now. That destiny of being the number one guy in Ring of Honor. That destiny of being ROH World Champion. As we know, his match against ROH World Champion Bandido at Final Battle has been made official, meaning that he’s one win away from achieving that goal. One win away from joining the ranks of Danielson, CM Punk, Samoa Joe, Homicide, Adam Cole, Nigel McGuinness, and so many other ROH legends. He’s one win away from fulfilling his destiny of making ROH pure once and for all.

There are no definites when it comes to the future of ROH but the one definite in their future should be Final Battle closing out with Jonathan Gresham becoming the ROH World Champion. With that title around his waist, it only furthers his placement as one of wrestling’s absolute best. 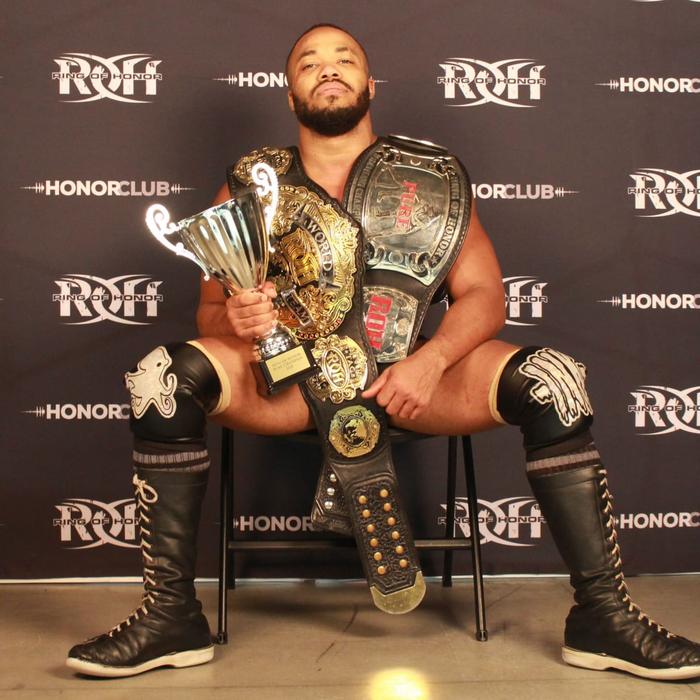 A Jonathan Gresham title win does not stop at Final Battle. With the ROH World Championship around his waist, ROH should allow Gresham to become “Wrestling’s Real World Champion” of professional wrestling by defending it around the world. We saw it when NWA didn’t have a weekly show as Nick Aldis was the traveling world champion, defending the title NWA World Championship 29 times in countless independent wrestling promotions before losing it to Cody Rhodes at All In. Gresham, who is already confirmed for wXw’s 16 Carat Gold tournament and competing as a part of NJPW Strong, can do that to a higher magnitude. Defending around the world in the United States, Germany, Japan, England, and wherever else he feels fit could not only help bring eyes to ROH once again if they were to return but give Gresham the attention and credit he deserves as one of the best in the world.

ROH never got to fully enter the “Forbidden Door” agreement that so many other promotions had. They remained working with NJPW with their signed talents appearing on ROH. We’ve seen The OGK appear on NWA television as well recently. The Briscoes are the reigning GCW Tag Team Champions even. But ROH never fully embraced what helped bring attention to other promotions like NWA, IMPACT, and AAA as each worked with NJPW and AEW.

Imagine Gresham setting foot inside an AEW ring to defend the ROH World Championship, a title that so many top stars on their roster have held. Or heading over to NJPW and defending it on one of their major shows. Not only feel historic but be the type of attention a potential returning ROH would like to have. Gresham becoming “Wrestling’s Real World Champion” leads to an unlimited amount of opportunities that are too good to pass up on. Gresham’s loyalty to ROH is admirable and his greatness is undeniable. Allowing him to fly the ROH flag when they take their time off to reset feels like the perfect move. One that can power them into the future when they need it most.

To see where you can watch ROH on TV or see the latest episode of ROH TV click here. For all things Ring of Honor, check out Honor Club.