This Sunday night, World Wrestling Entertainment (WWE) will run one of their biggest PPVs of the year and a Thanksgiving tradition — Survivor Series. Unlike past years, WWE has not focused too much on the brand vs. brand war despite it still being the plan for the show. Big E has been too focused on Kevin Owens and Seth Rollins, only making a comment of his match with Roman Reigns this week on Monday Night Raw. Charlotte Flair and Becky Lynch have been tossing insults at each other through social media, working off the rumors that they are no longer close. It has been a mess and as this is being written, both the men’s and women’s units of Team SmackDown are still looking for new members. It hasn’t been the best of builds for what was once considered a “Big Four” event.

No fear, as it’s only right to look at what the event should bring the fans with plenty of star power mixed in and the main event — even with limited build — that should deliver. Here’s a look at the Survivor Series card, along with some predictions.

Every effort going into this one is to make it seem as though Becky Lynch and Charlotte Flair want to destroy each other. Whether it be the cringe-worthy promo that led to Flair getting the crowd to chant back “uh oh” about Lynch or “Big Time Becks” stating that her success is what ruined the friendship between the duo — it hasn’t been all it should have been. The history between these two goes far beyond two former friends not liking the other anymore. Becky vs. Charlotte is a feud that delivered one of the best women’s matches in WWE history at its one and only all-women’s PPV, Evolution. It is a feud that came from Lynch saying enough is enough, completely flipping the switch on her trajectory and establishing her as one of the main faces in the company.

Instead, it has been filled with pettiness, boring taunts back and forth, and a complete miss to make this mean something. It certainly is not about Raw vs. SmackDown. All they care about is Lynch and Flair supposedly getting into an argument backstage. All that can be said about this match is that it is happening. There will be no last-second title change to shift it as we have seen in previous years. Becky vs. Charlotte should be bigger than it feels but one thing is for certain. It will be interesting to see who walks out as the winner. 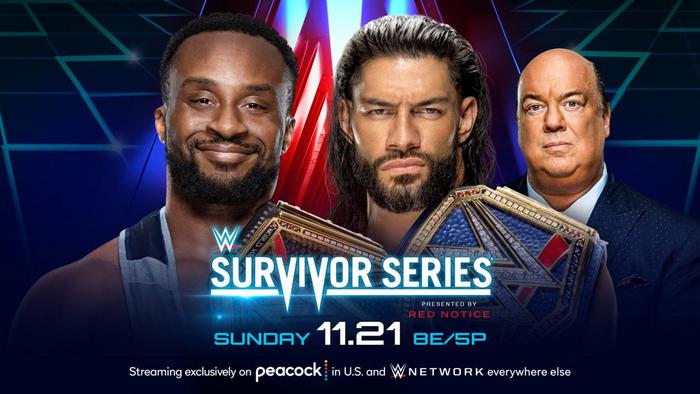 Big E vs. Roman Reigns is the type of match that is worthy of main eventing WrestleMania. That’s just a fact. WWE Champion vs. Universal Champion has given WWE some of the best matches over the last four years. Brock Lesnar’s matches with AJ Styles and Daniel Bryan. Roman Reigns vs. Drew McIntyre from last year’s event. All contenders to be WWE’s match of the year. And while that won’t be the main goal for these two come Sunday night, their disdain towards one another should be the source to another great match in the Survivor Series main event.

Reigns and The Bloodline have been decimating Big E’s family on Friday nights. Back-to-back weeks have seen Kofi Kingston and King Xavier Woods left hurt. Kingston is out with an injury and “The Tribal Chief” took the crown of the king. Reigns knows what he is doing and that’s getting into the head of Big E, a competitor who can defeat him. Jim Ross used to call matches like this a “slobberknocker.” Well, we are in for one at Survivor Series. As long as The New Day is out there to provide backup for the WWE Champion, this is one that can go either way.