On ChocoPro #172, Chon Shiryu defends the Super Asia Championship for the first time. Two episodes ago, he bested Baliyan Akki, Masahiro Takanashi, and Yuna Mizumori in a four-way to declare a new interim champion in the absence of current titleholder Minoru Fujita. Now that Shiryu is the interim Super Asia Champion, it hasn’t taken long for him to find new challengers. This brings us to this upcoming episode of ChocoPro, which will be a one-match show given a one-hour time limit. Without any further delay, let’s take a look at what’s set on the official Gatoh Move Pro Wrestling YouTube channel. 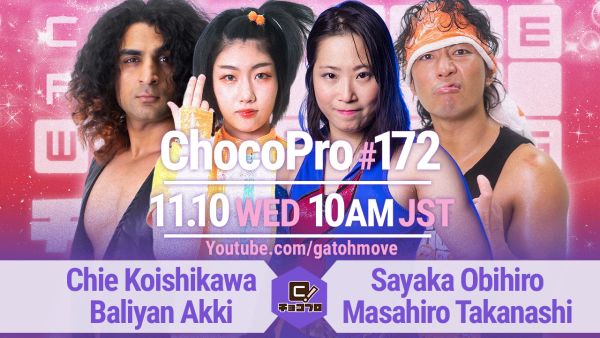 Starting ChocoPro #172 is a tag team match between up-and-coming stars and established veterans. On one side of Ichigaya Chocolate Square will stand the duo of Chie Koishikawa and one-half of the Asia Dream Tag Team Champions, Baliyan Akki. Their opponents will be the “Kappa Kozo Hunters” themselves, Sayaka Obihiro and Masahiro Takanashi. The latter team may have had recent run-ins with the green “Yokai” from IWA Japan, but they’re also incredibly experienced in wrestling, boasting roughly 30 years of experience between them. However, this may not provide them with as much leverage as they think. Not only is Akki a titleholder in Gatoh Move, as mentioned earlier, but “Chiezo’s” motivation is seemingly evergrowing, making her a formidable opponent in Ichigaya. This will be an exciting tag team contest, to be certain.

As mentioned earlier, Chon Shiryu is the interim Super Asia Champion; when Minoru Fujita is deemed clear to compete once more, the two will square off to determine who the undisputed titleholder is. However, the path toward this point won’t be a straight line for Shiryu. ChocoPro’s “Dragon” finds himself in a heavily competitive environment. Make no mistake: no matter how colorful or inviting Ichigaya Chocolate Square is, it invites some of the best wrestlers in Japan and around the world alike. Case and point, following Shiryu’s title victory, he was confronted by Yuna Mizumori. She threw her proverbial hat into the ring as the first challenger. On ChocoPro #172, we will see which competitor wants the blue belt more.

For many ChocoPro fans, it was a shock to see Shiryu claim the interim championship. While he’s incredibly formidable, utilizing a mix of wrestling, Kung Fu expertise, and creative use of the Ichigaya environment, many associate him as a tag team competitor; alongside Gatoh Move fourth-generation star Sayuri, they are known as Dragon Ninja. Nonetheless, when fighting solo, Shiryu is as formidable as they come. Furthermore, he is only the third competitor to hold the Super Asia Championship in the title’s short history. Needless to say, “Yunamon” is determined to become the fourth.

It wouldn’t be terribly farfetched to see Mizumori accomplish this goal, either. The color declarer of “Tropical Yahho” is an accomplished wrestler in Gatoh Move. Mizumori won the Asia Dream Tag Team Championship twice alongside TropiKawaild partner SAKI. Furthermore, she’s been part of ChocoPro since the very beginning, making her one of the savviest wrestlers on the show. If she wins, Mizumori can lay claim to her first-ever singles title. Tune into this upcoming episode of ChocoPro as these competitors take each other to the limit in their championship encounter.