The Monday Night Raw season premiere on October 25 heralded the debut of its new roster, post-draft, and also what the broadcast’s announce team repeatedly referred to as the beginning of a new era for Raw. If that is the case, World Wrestling Entertainment is closing the book on its recent troubled history, a low ebb of declining ratings, critical jeers, and stiffening competition from TNT’s All Elite Wrestling. The younger promotion has seen steady gains in ratings and critical acclaim since the signings of former WWE stars CM Punk and Bryan Danielson. To combat AEW’s ascent, WWE is attempting to turn Raw around by going back to basics and anchoring the show around the WWE Championship and the man who currently holds it, fan-favorite Big E.

A Look Into the Raw Season Premiere 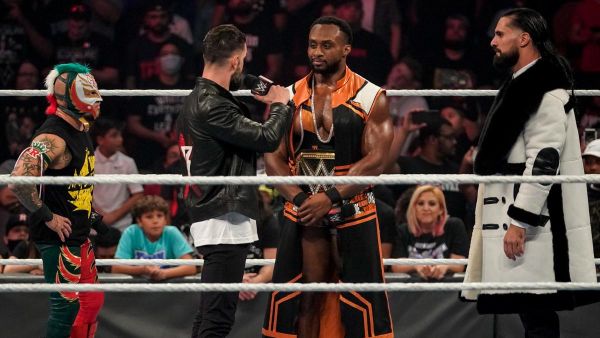 The Powerhouse Champion of Positivity

Big E’s championship reign has been met with near-universal approval from WWE fans, who’ve long seen him as more than the mouthpiece and strongman of The New Day. E’s victory tour continued at the Toyota Center broadcast, where the adoring Houston, Texas crowd was as eager to acknowledge Big E as their WWE Champion as any Friday Night SmackDown crowd would be to pay Roman Reigns court as the Universal Champion. Bobby Lashley was an entertaining and effectively formidable heel champion; his predecessor, Drew McIntyre, admirably carried the “ThunderDome Era,” but never got to hold the belt in front of a live crowd. Now that WWE is firmly back on tour and crowds are once again packing arenas to see their beloved WWE superstars, a champion like E is smart money: someone that crowds know and love, and cheer for at the very sight of him.

However, on the Raw season premiere, he was interrupted by a string of challengers putting themselves forward. Like the heroes of The Iliad campaigning for Achilles’s armor, each challenger rattled off his accolades and why he deserved the title shot. Kevin Owens and Finn Bálor mentioned not only their Intercontinental and Universal Championship wins but also brought up their NXT titles. Seth Rollins, ever the disruptor, interjected himself into the mix, only to be interrupted by Rey Mysterio, who alluded to their 2020 program in which Rollins notoriously put out Mysterio’s eye on the edge of the steel steps.

Looking Deeper Into the Season Premiere

The segment hearkened back to better days for Raw and sought to downplay the uneven booking of some of the performers involved, namely Owens and Bálor, by casting them all as past and future champions, each a credible threat to Big E. It was also a straightforward narrative, of champion assailed by challengers. SmackDown’s most thriving storyline, Roman Reigns’s “Tribal Chief” saga, has put one challenger after another before the Universal Champion, each pushing him to the limits of his dominant façade and bringing his vulnerabilities closer to the surface, none more so than Brock Lesnar. WWE’s competitor, AEW, also thrives in such straightforward, no-frills, but psychologically rich storytelling, such as the carefully paced program between Kenny Omega and Adam Page, wherein it is clear, loathe as they are to openly admit it, that both men dread their inevitable confrontation for the AEW championship.

Big E is affable, beloved, and universally recognizable to the audience, the sort of ardor inspiring babyface hero that WWE has lacked since John Cena prioritized Hollywood over a full-time pro wrestling career. Big E being beset on all sides for his newly won championship is a story that fans can emotionally invest in, and the story that the WWE Championship itself needs to win back some credibility, as the Universal Championship has quite stolen the show during Reigns’s run with the belt.

The right to challenge Big E was set to be decided by a fatal four-way ladder match. Such a measure was not only a showy way to open a new season of Raw, but a return to basics for a show that is recovering from a tendency to be hijacked by gimmicks: whatever machinations and motivations lead them there, the belt is the prize and the match is both the story told, and the theater where it unfolds.

The main event itself, the ladder match, was the most brutal spectacle Raw has staged in some time, as the challengers tried to stop each other from making the climb that would secure their future. At times chaotic, the bout had a gripping undercurrent of desperation, and the tension of loathing between Rollins and Mysterio as their alluded-to past echoed around them. For Owens and Bálor, this is a shot they both sorely needed, and both sustained considerable damage as Seth Rollins overpowered his fellow challengers, leaving them sprawled and incapacitated about the canvas as he made the climb and secured the opportunity, hearkening back to his first run as Mr. Money in the Bank.

Big E’s first challenge was set: the wildcard, the pitiless and volatile Seth Rollins, fresh off a SmackDown program with Edge that produced some of WWE’s best matches of the year so far. However, Bálor, Mysterio, and Owens are surely not quite through with their quest for the WWE Championship, nor will Rollins walk free for costing them all a shot at it. Between those five performers, Raw has enough material for several great matches and effective storytelling that can give some much-needed credibility back to the WWE Championship and the red brand.