This week, the National Wrestling Alliance takes a different turn in regard to its weekly programming. Tonight’s edition of NWA Powerrr will be an EmPowerrr special edition show, featuring solely women’s wrestling action. While it may go without saying, the name comes from the same all-women’s wrestling event held two months ago. The card set for tonight’s event is nothing short of promising, especially with the recently crowned NWA World Women’s Tag Team Champions defending their titles. This, and much more, will be set to air tonight on FITE at 6:05 PM EST. Without any further delay, let’s take a look at this EmPowerrr special edition episode of NWA Powerrr. 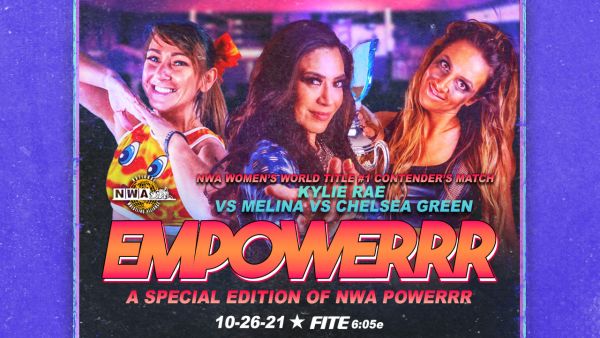 A New Contender Will Be Decided

On this EmPowerrr special edition episode of NWA Powerrr, a new contender for the NWA World Women’s Championship will be decided. As of now, the title in question is held by Kamille, who bested Serena Deeb this past June for the gold. The current champion is set for action on this show as well, as she battles “The Little Blue Dragon” Tootie Lynn in nontitle competition. However, it would behoove the champion to keep her eyes set on the upcoming three-way bout between “Smiley” Kylie Rae, Melina, and NWA Women’s Invitational Cup winner Chelsea Green. On paper, any one of these competitors can realistically punch their ticket toward a title match.

Following the aforementioned Invitational Cup victory at NWA EmPowerrr this past August, Green challenged Kamille for the NWA world women’s title the following evening at NWA 73. Despite a valiant effort, “The Hot Mess” was unsuccessful at The Chase. Meanwhile, Melina stands as the veteran of this match and she’s made it no secret that she aims to hold gold once again. In fact, she challenged IMPACT Wrestling’s Knockouts Champion, Deonna Purrazzo, at EmPowerrr. Rae may be the wildcard of this match; despite not being as involved in the mainstream title scene, her determination can’t be denied. No matter who has the advantage, a new contender will be determined this week on NWA Powerrr.

Also set for this week’s NWA Powerrr is an NWA World Women’s Tag Team Championship match. Having won the renewed titles at NWA EmPowerrr in a tournament, The Hex emerged victorious with the gold in their possession. Since then, Allysin Kay and Marti Belle have worked both tag team and singles matches alike. Case and point, on the September 28 episode of Powerrr, Kay took on Jennacide. To the surprise of many, Jennacide picked up the victory over the titleholder. This win was instrumental, as it afforded Jennacide and Paola Blaze a future title match. Throw in the mischievous presence of Taryn Terrell and one may argue that the champions have the edge tonight.

The trio of Jennacide, Blaze, and Terrell has been nothing short of a thorn in the side of many NWA wrestlers. Think back to the EmPowerrr pay-per-view event, as said trio interrupted Gail Kim’s in-ring speech to the fans. They were soon dispatched by not only Kim but Awesome Kong, arguably the latter’s fiercest rival during the heyday of the IMPACT Knockouts scene. It’s also worth noting that Jennacide, Blaze, and Terrell faced The Hex and Lady Frost in the NWA 73 preshow, falling short against the champions and “The Coolest Wrestler You’ll Ever Meet.” To say that this tag team title match, on NWA Powerrr, is important would be an understatement.