Last time on ChocoPro, Season 10 commenced in a major way. What was meant to be a match to determine a new contender for the Super Asia Championship ended without a clear decision. Little did viewers expect that, following the match, more contenders would throw their hats into the proverbial ring. The status of the Super Asia title scene will undoubtedly develop in due time, which brings us to ChocoPro #164. This is what to know about this upcoming show, comprised entirely of tag team action. 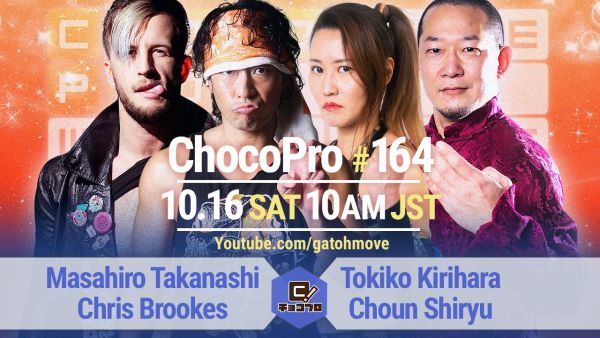 Making his ChocoPro Season 10 debut is Chris Brookes, who will be teaming up with Masahiro Takanashi as Calamari Drunken Kings. CDK has been a tag team to keep one’s sights on in Gatoh Move Pro Wrestling, as they blend wily tactics and veteran sensibilities to create a formidable package. Given Brookes’s friendship with Takanashi, it should come as no surprise that the former boasts a more carefree position in Ichigaya Chocolate Square when they’re paired off. Make no mistake, however: this is as competitive of a team as they come. This is evidenced by the fact that said team has gone undefeated throughout Season 9. Can they keep this hot streak going into Season 10?

Challenging CDK is a duo comprised of separate team members. Longtime ChocoPro viewers will know that Tokiko Kirihara is often paired with Antonio Honda as Black Comaneci. On the previous episode, they took on Best Bros in a losing effort. Needless to say, Kirihara will be looking to regain her momentum, even if it’s alongside a partner she’s unfamiliar with. Chon Shiryu, also known as one-half of Dragon Ninja alongside Sayuri, fought Yuna Mizumori on ChocoPro #163 in the aforementioned number one contender’s match. Shiryu still has singles gold in his sights. To reach his goal, a win on ChocoPro #164 would be a tremendous boost. 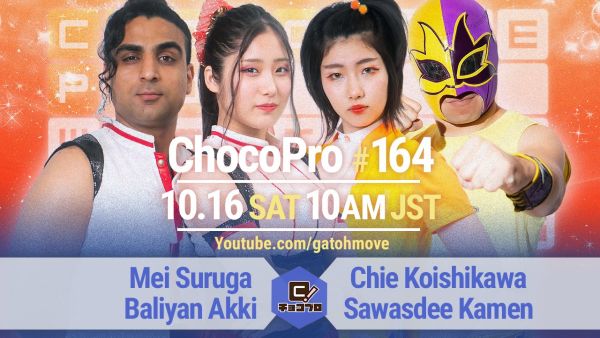 The main event of ChocoPro #164 will see the Asia Dream Tag Team Champions, Best Bros, in action. Mei Suruga and Baliyan Akki kicked off Season 10 in stellar fashion, overcoming the oftentimes fiendish antics of Black Comaneci. This doesn’t even begin to cover their victory on the Season 9 Finale, where Best Bros retained their titles against Egg Tarts and Masahiro Takanashi and Hoshitango in three-way tag team action. Suruga and Akki remain atop the tag team food chain in Gatoh Move, so it will be interesting to see who steps up next. Akki has been particularly motivated, as he felt he had the right to contend for the Super Asia Championship as well. Can a win here accelerate the self-proclaimed “Ace” of ChocoPro toward his goal?

Teaming up for the first time, on ChocoPro #164, are “Too Much Energy” Chie Koishikawa and the Gatoh Move mascot himself, Sawasdee Kamen. Both personalities are nothing short of colorful, personality and appearance-wise, making them a solid combination on paper. With that said, as mentioned earlier, they’ve met to join forces up until now. Koishikawa is often linked to Hagane Shinnou as the fan-favorite duo Egg Tarts. Despite this, “Chiezo” has shown her aptitude for working alongside other partners, including “Mei-chan” as Warm Caterpillars. It will be interesting to see how Koishikawa and Kamen work together against the top team in Gatoh Move.