It’s a tag team showcase on ChocoPro #159. On the previous episode, viewers were treated to a show that featured core Gatoh Move Pro Wrestling stars only; there were no guests to speak of. This time around, viewers will see not 1, not 2, but 4 returning guests participate in the same match. Furthermore, it is positioned in the main event slot, which makes it all the more must-see. Whether you’re a returning viewer or are interested in tuning in for the very first time, here is what you should know heading into ChocoPro #159, airing live on the official Gatoh Move YouTube channel. 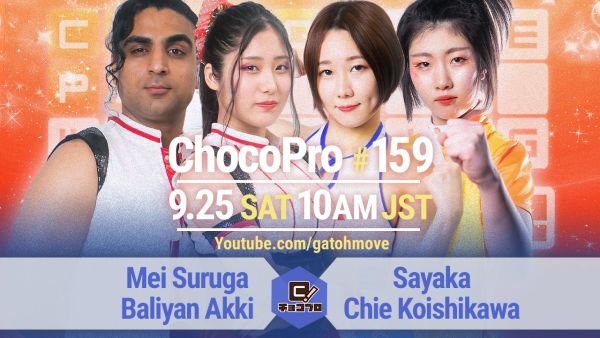 Opening the action on ChocoPro #159 are the reigning Asia Dream Tag Team Champions, Best Bros. Mei Suruga and Baliyan Akki have been holding down the tag team scene of Gatoh Move in 2021, though it’s fair to say that they’ve been chomping at the bit for new challengers. Keep in mind that they haven’t defended the Asia Dream tag team titles since July. While many formidable teams have stepped up to the champs, Suruga and Akki overcome them all. This upcoming bout is non-title, though a win for their opponents will serve them well in earning championship gold.

Stepping up to the challenge of Gatoh Move’s “Apple Goblin” and the self-proclaimed “Ace” of ChocoPro is the fourth-generation duo of Sayaka and Chie Koishikawa. On the surface, their personalities couldn’t be more different. Sayaka, Gatoh Move’s “Beautiful Cosplayer,” tends to be more understated yet hard-hitting. Meanwhile, Koishikawa lives up to her “Too Much Energy” moniker, boasting seemingly endless exuberance and oftentimes unpredictable offense. Koishikawa and Sayaka have a tag team win, together, under their belt to boot; on ChocoPro #118, back in May, they bested Pencil Army‘s Emi Sakura and Lulu Pencil. Can lightning strike twice against the best tag team Gatoh Move has to offer?

The main event of ChocoPro #159 will see four returning ChocoPro guests in tag team action. On one side of Ichigaya Chocolate Square will stand the established team of Chris Brookes and Masahiro Takanashi. Collectively known as Calamari Drunken Kings, Brookes and Takanashi appropriately share a love for alcohol. Furthermore, they’ve been regularly teaming since 2018, either testing their might in DDT Pro or causing trouble in Gatoh Move. Over the past few years, CDK found allies in unlikely places, ranging from Yuna Mizumori to the former Rin Rin of Gatoh Move, Yukari Hosokawa. On this episode of ChocoPro, they take on a team that’s simply too difficult to properly prepare for.

Two men that are known for their unorthodox, oftentimes comedic offense are Antonio Honda and Trans-Am Hiroshi. Honda, the honey-loving wrestling veteran, should be familiar to longtime ChocoPro viewers. From his musical interludes to the way in which he fakes out opponents, Honda is more than simply one’s average comedy wrestler. Teaming with Honda is the yoga enthusiast with an equally melodic approach in Trans-Am Hiroshi. He was last seen on ChocoPro back on episode #113, back in May, besting Baliyan Akki. Since then, he’s wrestled primarily for his home promotion, Pro Wrestling BASARA. Over the years, Honda and Hiroshi have teamed on multiple occasions; we will see if their latest union yields a victory.