G1 Climax 31 Day 2 will finish out the opening weekend for New Japan Pro Wrestling (NJPW) on Sunday. They have guaranteed a newsworthy night as the next chapter of NJPW’s greatest rivalry will be written in the main event. Here’s a look at what to expect for Day 2 of the G1 Climax.

— B Block: YOSHI-HASHI vs. EVIL

— B Block: SANADA vs. Tama Tonga

— B Block: Hirooki Goto vs. Taichi

Opening up the G1 Climax for the B Block will be a matchup between YOSHI-HASHI and EVIL. This is an interesting match for the former as YOSHI-HASHI has shown over the last year that he has improved dramatically, becoming one of the brighter spots in what has been a tough year for NJPW. On the other side is EVIL, who is fresh off a loss to Shingo Takagi in a match for the IWGP World Heavyweight Championship. With the House of Torture behind him, this could be the time EVIL rises to the top. They could be what gets him there based on his threats thus far. A win here would be a step in the right direction.

Jeff Cobb is at a position in his career where he is now a favorite heading into the G1 Climax. A match with Chase Owens on Day 2 should be what pushes him forward with what could be the easiest two points he can earn throughout the tournament. This could be Cobb’s year and this is just the beginning.

SANADA has made some bold claims heading into this year’s tournament, threatening to retire even if he didn’t fully mean it. The finalist from last year has more to live up to than people are giving him credit for. His first bout in the G1 will be against Tama Tonga, who is returning to the G1 Climax after missing it over the last two years. Tonga surely has tons to prove and a win over last year’s B Block representative would put the entire rest of the field on notice. Expect SANADA to win and get off to the start that he needs.

Hirooki Goto versus Taichi is one of the more interesting battles of the first week. There’s no clear winner as both of these men are among the more underrated talents in NJPW so getting a shot to show it in the semi-main event is a big deal. Goto is a former winner but it’s been a very long time since he has been at the top of his game. Taichi, on the other hand, would have many agree that this is the best he has ever been as a member of the Dangerous Tekkers. It’s a 50/50 split as to who could walk out but should make for a great match. 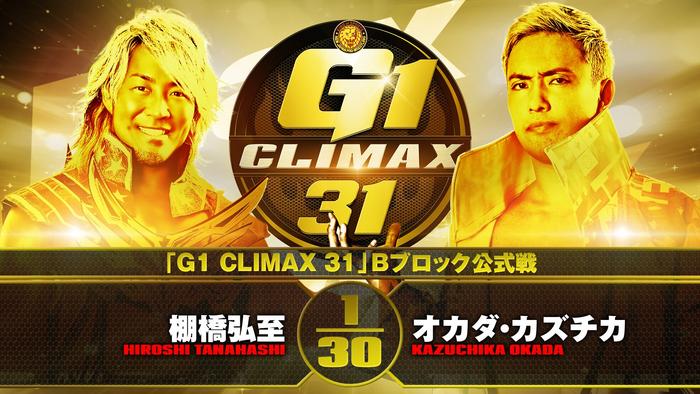 There is no better way to kickoff the G1 Climax. Hiroshi Tanahashi and Kazuchika Okada, NJPW’s two all greatest competitors, will go head to head in the main event. The long-time rivals have done everything against each other, from competing in the G1 to main eventing Wrestle Kingdom. Yet somehow, this will be the first time these two titans face off in singles action since the opening night of G1 Climax 29 in 2019. It was Okada who walked out of that match with the win as it seemed Tanahashi was on the downswing of his career. But never doubt the “Ace.” In 2021 alone, Tanahashi has shown to the world that he’s not anywhere close to being on the downswing but still has enough in the tank to be considered the best. As the current IWGP United States Champion, none of this is a shock.

Everything is on the deck in this one. A potential classic, a tournament-defining win, and the ability to say that they have taken the most recent chapter in their storied rivalry. All eyes will be on this match and it should be up to the standards of their many wars before.