In their third straight show of the weekend, Gatoh Move Pro Wrestling wraps things up with ChocoPro #157. Unlike many of the shows in the past, this particular episode lacks tag team action. The three matches scheduled are one-on-one encounters. What this means, among other things, is that the competitors involved will have more room to maneuver and make the most of their environment. Given the unpredictable nature of Ichigaya Chocolate Square, one has to believe that these matches won’t unfold without hijinks ensuing. Here is a complete rundown of the action set for ChocoPro #157. 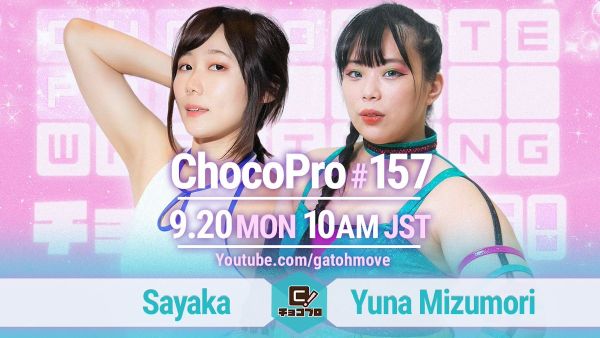 In the first singles bout on ChocoPro #157, Gatoh Move’s “Beautiful Cosplayer” encounters the force of “Tropical Yahho.” The soft-spoken yet hard-hitting Sayaka was last seen on episode #150, where she fell to veteran Masahiro Takanashi. Before then, she struggled in most of her matches. In fact, her last victory took place during the One of a Kind Tag League; in the first round, alongside Minoru Fujita, she picked up a surprise pinfall victory over Tokiko Kirihara, who was teaming with Antonio Honda. Determined to stand on her own, Sayaka will step into Ichigaya Chocolate Square for a first-time singles encounter.

For those that have been watching ChocoPro since the beginning, it’s known that this isn’t the first time Yuna Mizumori has been involved in a match with Sayaka. On the very first episode, back in March of 2020, the two teamed up in a victorious effort over Lulu Pencil and Mitsuru Konno. With that in mind, ChocoPro #157 marks the first time Sayaka and Yuna Mizumori face off in one-on-one action. Given “Yunamon’s” success as a singles wrestler, whether against the fourth-generation wrestlers or her own contemporaries, it’s fair to expect Mizumori to pick up another win. Nonetheless, expect Sayaka to give this encounter everything she has. 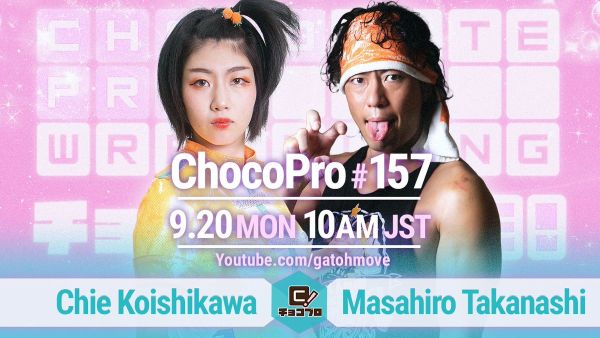 Next up, on ChocoPro #157, “Too Much Energy” Chie Koishikawa tests her might against Masahiro Takanashi. On the episode prior, Koishikawa will have teamed with Best Bros, Mei Suruga and Baliyan Akki, in a six-person tag team match against Takanashi, Yuna Mizumori, and Chris Brookes. One of Koishikawa’s defining character traits, aside from her trademark exuberance, is her fearless acceptance of challenges. This is especially true against the veterans of Ichigaya Chocolate Square, Takanashi included. However, to pick up an elusive singles victory on this show, she will need much more than sheer bravery.

In addition to being a proficient technical wrestler, Gatoh Move’s “Drunken King” is as crafty as they come. Given the fact that Takanashi has been wrestling since the early 2000s, this should come as no surprise. Furthermore, he’s well-versed in combat within Ichigaya, as he’s only wrestled matches in Gatoh Move throughout 2021. Takanashi will enter this match with momentum on his side, which has been built up as a result of consistent victories. If he enters this match too confident for his own good, however, it may very well be the former fencer in “Chiezo” that earns the upset win.

The main event of ChocoPro #157 features two of the most dominant competitors in Gatoh Move. “The Dragon” Chon Shiryu has consistently proved himself as a singles and tag team wrestler alike. When he isn’t working alongside Sayuri, who Shiryu took on as protege with their Dragon Ninja duo, he has been able to win one singles contest after another. New and longstanding ChocoPro viewers alike may be interested to know that, in one-on-one Gatoh Move action, Shiryu is undefeated in 2021. Can he keep this hot streak alive heading out of this show? Anyone that knows the caliber opponent he’s up against will attest that this is easier said than done.

In addition to being one-half of the Asia Dream Tag Team Champions alongside Mei Suruga, Baliyan Akki has become more prominent in pro wrestling across Japan. In 2021 alone, he competed for such promotions as DDT Pro, Pro Wrestling ZERO1. and All Japan Pro Wrestling. Though he may not have always won these encounters, Akki’s showings spoke for themselves. In Gatoh Move, however, there are few that can touch the self-proclaimed “Ace” of ChocoPro. This will be the first singles match between Shiryu and Akki since May of 2019, which predates ChocoPro. Though Shiryu won their previous encounter, Akki is a more experienced wrestler. Will said experience be enough to tip the proverbial scale in Akki’s favor?