Once again, the Gatoh Move Pro Wrestling crew is set for action with ChocoPro #155. On the previous show, Masahiro Takanashi celebrated his 18th anniversary in pro wrestling, engaging Chon Shiryu in frantic combat that took viewers from Ichigaya Chocolate Square to the outside world and back again. One may assume that the action will be more contained this weekend, but as longtime viewers will attest, this isn’t a certainty. Regardless, there is plenty of action to take in. Here is what to know before ChocoPro #155 airs on the official Gatoh Move YouTube channel. 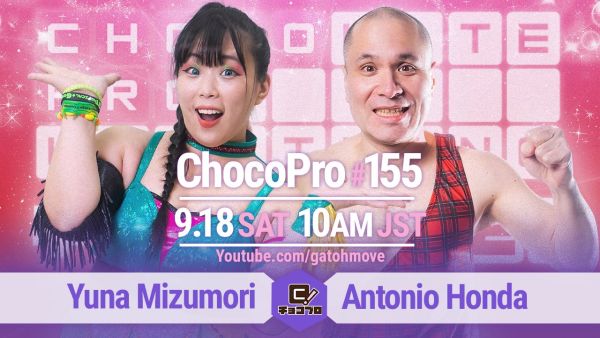 Starting things off, on ChocoPro #155, is “The Tropical Fairy” herself taking on a wily veteran of Japanese professional wrestling. Yuna Mizumori found herself picking up a win on the last show, emerging victorious alongside fellow TropiCalamari member Chris Brookes against the duo of Mei Suruga and Chie Koishikawa, collectively known as Warm Caterpillars. Following their victory, TropiCalamari showed no shyness in further bullying their opponents. Though “Yunamon” may be a powerhouse, she will need more than brute strength if she plans on picking up another win.

Whether he’s strumming on a guitar and serenading listeners or summoning his trusted ally, Gon the Fox, Antonio Honda is a formidable competitor within Ichigaya Chocolate Square. This is particularly true in singles competition, as he has seldom lost one on one. This should come as no surprise given Honda’s accomplishments in DDT Pro and elsewhere. Yuna Mizumori vs. Antonio Honda is a long time rematch in the making, as their last singles encounter dates back to only the second episode of ChocoPro in April 2020. Though Honda won their previous encounter, he will have to work that much harder to thwart “Yunamon’s” plans once more. 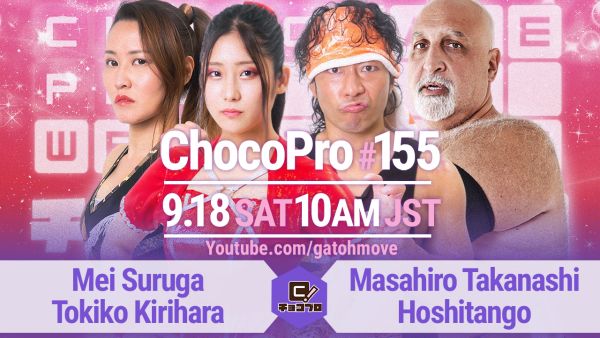 Mei Suruga and Tokiko Kirihara vs. Masahiro Takanashi and Hoshitango

For the first time, not only in ChocoPro but in their respective wrestling careers, Mei Suruga and Tokiko Kirihara will join forces in two-on-two tag team action. Though they’ve often been opponents in singles and tag team contests, they have yet to work together in traditional tag scenarios. On the surface, their wrestling styles couldn’t be starker. While “Mei-chan” is known for being equal parts fast-paced and mischievous, “Otoki-san” has a more hard-hitting approach, utilizing her mixed martial arts background to inflict pain and wear down opponents. However, this very combination of styles could be what’s needed to overcome a pair of veteran wrestlers in Masahiro Takanashi and Hoshitango.

Though Takanashi recently celebrated a major milestone, as mentioned earlier, he’s back to business on ChocoPro #155. The beer-loving “Drunken Warrior” has been doing his best to keep Ichigaya in check during Emi Sakura‘s absence, albeit with mixed results. He certainly has his work cut out for him on this show, especially given his unpredictable opponents. Teaming with Takanashi, once again, is the Argentina-born former sumo wrestler known as Hoshitango. The last time they teamed up was on ChocoPro #151, when they picked up a victory over Suruga and Sawasdee Kamen. Can this veteran duo pull off another victory?

“Main Event Chie” is back again on ChocoPro #155, as the former fencer with “Too Much Energy” squares off against one-half of the reigning Asia Dream Tag Team Champions. Chie Koishikawa has been in something of a slump since ChocoPro #148, where she defeated fellow fourth-generation Gatoh Move star Sayaka. Since that point, “Chiezo” has repeatedly fallen to different opponents in singles and tag team bouts alike. It also doesn’t help that her luck in janken tournaments has been spotty at best. Nonetheless, each loss has seemingly motivated her further. Fans of Koishikawa can only hope that this motivation leads her to an imperative singles victory. Given the caliber of opponent she’s set to face, this won’t be easy.

Baliyan Akki had what can best be described as an eventful ChocoPro #154. As he opened the show, greeting viewers and providing background on the show to come, a rare appearance from DJ Nira took place. Japanese professional wrestling fans may remember this particular name from his time in DDT Pro. On ChocoPro #154, Nira entered through the window and blindsided Akki, which triggered an impromptu battle with no decisive winner. On ChocoPro #155, Akki knows exactly what he’s in for. This isn’t the first time that Koishikawa and Akki have faced off, nor is it likely to be their last. With that said, this main event should be nothing short of competitive.