From birthdays to anniversaries, Gatoh Move Pro Wrestling has been in a celebratory mood in the first half of ChocoPro season 9. ChocoPro #154 will be no exception, as the Gatoh Move crew honors Masahiro Takanashi on his 18th anniversary in professional wrestling. As expected, the man that “Only Lives Twice” will be the centerpiece of this show. However, there is plenty to see and experience on this episode, so tune into the official Gatoh Move YouTube channel to watch the show live or on-demand afterward. Without any further delay, let’s take a closer look at the action to come. 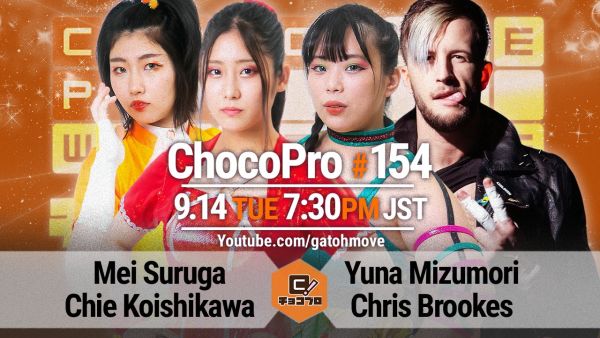 Two unlikely duos reunite in tag team action on ChocoPro #154. On one side of Ichigaya Chocolate Square will stand Warm Caterpillars, the duo of Gatoh Move stalwarts Mei Suruga and Chie Koishikawa. On the surface, given their energetic personalities, one wouldn’t assume that they’d be a capable team. However, for the times that they’ve joined forces, they’ve been a fan favorite tandem. Their team name, Warm Caterpillars, is derived from their penchant for bundling up in blankets, not unlike caterpillars in cocoons. They previously teamed up on ChocoPro #147 last month, where they fell to Calamari Drunken Kings, the team of Masahiro Takanashi and Chris Brookes.

Speaking of Brookes, the nefarious “Octopus” of Gatoh Move will be teaming with Yuna Mizumori, reuniting TropiCalamari. Their team name is relatively simple; whereas “Yunamon” is known as “The Tropical Fairy,” Brookes’s use of the Octopus Stretch has somehow translated to calamari, though the two creatures are different. In any event, TropiCalamari has been a successful duo during the few times they’ve worked together. Not only has this been true for their work in Gatoh Move but DDT Pro, where they teamed up this past October. In this encounter featuring two of the less commonly seen tandems in Gatoh Move, this is anyone’s match to win. 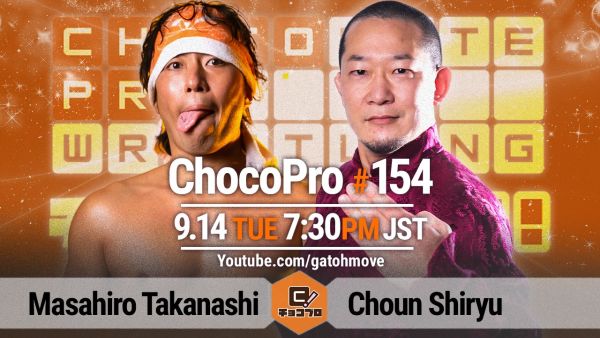 As mentioned earlier, ChocoPro #154 marks the 18th anniversary of Masahiro Takanashi. Indeed, the beer-loving Takanashi has been involved in professional wrestling for 18 years and counting. He began his professional wrestling career in 2003, learning under Ultimo Dragon before making his way to DDT Pro, where he became a regular competitor. Today, he holds numerous DDT accolades, including 2 Extreme Championship reigns, 7 KO-D Six-Man Tag Team Championship runs, and a staggering 20 Ironman Heavymetalweight Championship wins. In 2006, Takanashi made his way to Ice Ribbon, where he befriended Emi Sakura and assisted her in training wrestlers. This friendship would be integral to the development of Gatoh Move, as Takanashi served as Sakura’s right-hand man, a role he has maintained. On his anniversary show, he takes on a man he shares considerable history with.

Given that Chon Shiryu broke into professional wrestling shortly after Takanashi, it would make sense that the former serves as the latter’s opponent on ChocoPro #154. Their history dates back to the mid-2000s, where they worked several multi-person contests against one another in DDT. They would go on to cross paths in organizations such as Big Japan Pro-Wrestling and, of course, Gatoh Move. In fact, they’ve competed for the purple-and-yellow organization as far back as 2012, long before ChocoPro was even a concept. This past January, before Takanashi made his official return to action following injury, he wrestled a short exhibition match against – who else – Shiryu. Needless to say, these men have crossed paths on multiple occasions. ChocoPro #154 will be yet another chapter in their ongoing series, and a promising chapter at that.