Rampage will be the penultimate event before the premier showcase of All Elite Wrestling, and it’s time to preview this huge event. Just two days away from the much-anticipated All Out event, the stage is set for another chaotic and exciting edition of AEW Rampage. “The Best in The World” CM Punk speaks live in front of his adoring people ahead of his showdown at All Out. AEW’s resident extraterrestrial will be tested as she goes up against “The Doctor’s” hired help. And, we hear from “The Redeemer” himself live under the bright lights of Rampage.

There is much more in store for Friday’s event. So, don’t worry it will be a night of fast and fiery action from bell to bell. Two nights and one show away from the big one. All Out is a “can’t miss” show but this week’s Rampage is by no means a slouch as far as #AllElite action is concerned. Let rampage run rampant this Friday as we run it down. 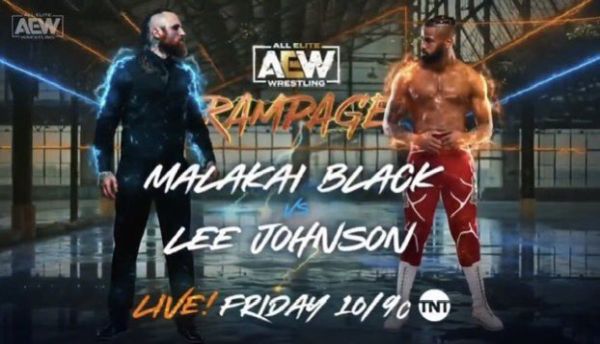 What Nightmares Are Made Of

The dark destructive entity known as Malakai Black continues his crusade on this week’s edition of Rampage. After horrendously attacking “The Enforcer” Arn Anderson and the dismantling of “The American Nightmare” Cody Rhodes, Malaki turned his attention to Arn’s son Brock Anderson. The kid had heart, we have to give him that. But, on last week’s Dynamite, the heart could only get you so far. Black convincingly brutalized the up-and-comer and young Brock had next to no offense to show for it. Arn Anderson almost threw in the towel. However, Brock pleaded with his father not to. The disheartened father allowed the contest to continue, despite his best judgment. Malakai Black walked away with a statement, further engrossing himself with this quest to get under Rhodes’s skin and systematically pick off The Nightmare Family one by one.

This leads us to this Friday night on AEW Rampage. It’s “Big Shotty” Lee Johnson taking up the mantle to fight for his mentors and the family that gave him a shot at the big time. Johnson is a tremendous athlete with a very high ceiling. His offense is as quick as a blink and he can catch anyone off guard at a moment’s notice. With that being said, he’s not facing just any man. He is willingly stepping into the ring with possibly the most dangerous competitor in AEW’s roster. With no moral compass to hold him back, Black will not hesitate to do anything and everything to destroy the competitor in front of him. Johnson will be in for a rude awakening if he is not ready. Will Lee Johnson do the impossible and slay the beast or will Malakai Black reign supreme and continue the nightmare? 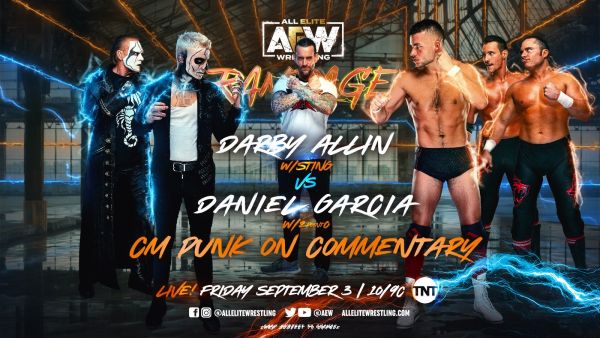 The Final Fight Before All Out

The dream match at All Out is almost upon us. It’s Darby Allin versus CM Punk. A match we never really thought could be possible and yet two days from Friday it’s about to come true. Surprisingly on the latest edition of Dynamite, Allin and “The Icon” Sting came to the aid of Punk after being sneak attacked by 2Point0 and Daniel Garcia. Allin and Sting were having none of it. Allin was hellbent on getting Punk at a hundred percent for their monumental matchup at All Out.

In one of the coolest moments in wrestling this year, all three men hit their respective finishers on the dastardly trio; Allin with the Coffin Drop, Sting with the Scorpion Death Drop and, after 7 years, a GTS by Punk on Jeff Parker.

AEW Rampage is the last stop before All Out. Despite the big event being mere days away, Allin has stepped up to the plate. He is in a fighting mood opposite Garcia this Friday night. Never hurts to get a tune-up, as they say.

More interestingly, Darby Allin’s opponent will be in the building. CM Punk will speak live on the same night and it will be quite an intriguing prospect all things considered. For one competitor, it’s gaining momentum; for the other, it’s the opportunity to hang with the big-time players.

Regardless of the result, we will surely be in for quite a treat on Rampage. Will Daniel Garcia finish what he started, or will Darby Allin be rolling into Illinois with all the momentum in the world?

Stay tuned to the Last Word on Pro Wrestling for more on this and other stories from around the world of wrestling, as they develop. You can always count on LWOPW to be on top of the major news in the wrestling world, as well as to provide you with analysis, previews, videos, interviews, and editorials on the wrestling world.  You can catch AEW Dynamite Wednesday nights at 8 PM ET on TNT and AEW Dark: Elevation (Monday nights) and AEW: Dark (Tuesday nights) at 7 PM ET on YouTube. AEW’s new show, AEW Rampage, airs on TNT at 10 PM EST every Friday night.