New Japan Pro Wrestling (NJPW) looks to continue getting back on track with night two of Wrestle Grand Slam inside the MetLife Dome. The baseball-themed shows have dominated the summer for NJPW, and with this being the final major show ahead of the G1 Climax, it carries a lot of weight for the performers. Who will bring momentum into the G1? Who will be fading heading into the round-robin tournament? Here’s a preview for night two of Wrestle Grand Slam. live from the MetLife Dome.

The time has come for one of the fastest-rising promotions in all of professional wrestling to get their shot on the grand stage. Stardom, who has dark matches in the past as part of NJPW’s Wrestle Kingdom over the last two years, will be airing two matches live on the broadcast to seemingly kick off both nights of Wrestle Grand Slam. Here on night two will be the more special of the two as it will see Stardom’s Goddesses of Stardom Champions Syuri and Giulia heading into tag team action against the Queen’s Quest duo of Momo Watanabe and Saya Kamitani. If you have yet to witness what Stardom brings to the table, this will be a treat for you.

Syuri and Giulia form one of the best tag teams in the world as they continuously put on must-see matches that any fan will enjoy. On the other side will see the hard-hitting Watanabe team up with the high-flying Kamitani. This will be an interesting mix seeing that they are the more unique team of Queen’s Quest but will give a performance worthy of you watching. These four, if allowed the time, should show the world why Stardom has become one of the best promotions in the world. 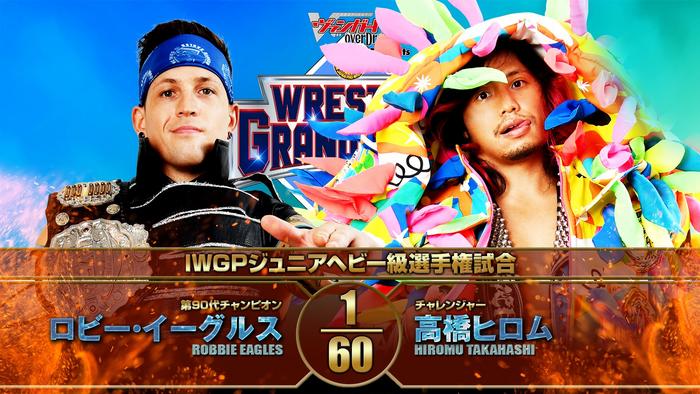 The return of the “Ticking Timebomb” to the title scene is here as Hiromu Takahashi hopes to put his injury woes behind him once and for all as he faces Robbie Eagles for the IWGP Junior Heavyweight Championship. Takahashi has done everything in his power to get back to full health and if his return match with DOUKI is a sign of things to come, he is better than ever. Eagles, however, wants to prove that his reign as champion is far more than transitional. After defeating El Desperado at Wrestle Grand Slam inside the Tokyo Dome, this is his chance to show he is the new top dog of the junior division with a win over its ace. These two are going to put on a show as they display why the junior division is as good as it has ever been in this premier semi-main event spot. 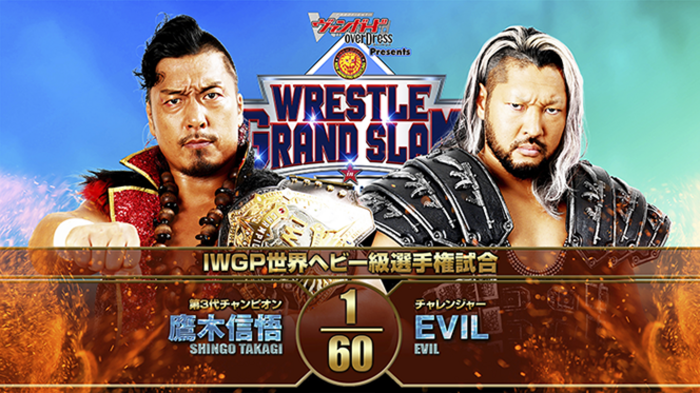 Shingo Takagi will look to defend his IWGP World Heavyweight Championship successfully for the second time as he takes on “The King of Darkness” and former Los Ingobernables de Japon member EVIL. It didn’t take long for the former IWGP Heavyweight and Intercontinental Champion to lay down the challenge to Takagi, as it was immediately after Takagi’s successful defense over Hiroshi Tanahashi at Wrestle Grand Slam inside the Tokyo Dome. EVIL has shown in the past that he has what it takes to be at the top of the mountain for NJPW, so there’s no reason to think he can’t do it again come Sunday. That being said, Takagi has been on a different level from everyone else in NJPW this year and will leave everything out there to walk away with his title.

These two could put on a tremendous hoss fight if the Bullet Club antics are minimized. Everything could be EVIL at the conclusion of Wrestle Grand Slam.