Ringing in the month will be a show co-hosted by Horror Slam Wrestling and Game Changer Wrestling. This marks the first time that GCW has worked with the Michigan-based Horror Slam, though it’s surprising to know that it took this long for this union to form. After all, given GCW’s penchant for ultraviolent wrestling, the union in question seemed like a no-brainer. Nonetheless, they are set to showcase their event simply titled Horror Slam vs GCW, which will take place live on September 1 from the Knights of Columbus Hall in Detroit, Michigan.

Before getting into the card, there are a few things to know about Horror Slam. Established in 2017, this particular independent promotion saw humble beginnings. It began as a love letter to the horror genre itself, featuring not only independent talent but wrestlers based on horror movie characters including Michael Myers from Halloween and Leatherface from The Texas Chainsaw Massacre. Since then, it has blossomed into a legitimate indie organization, specializing in all facets of hardcore wrestling. Horror Slam vs GCW is very much a meeting of two worlds. Here’s what to know prior to the event in question. 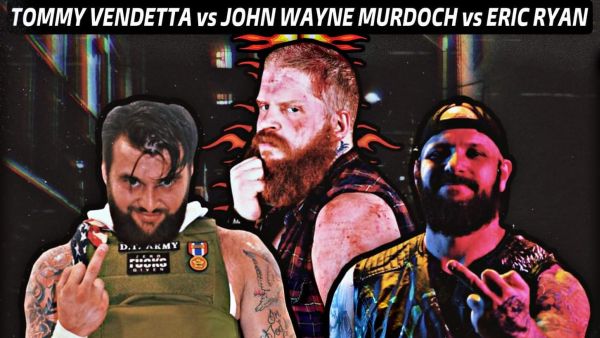 A Deathmatch Title Encounter at Horror Slam vs GCW

In one of two championship matches at Horror Slam vs GCW, the Horror Slam Deathmatch Championship will be on the line. Established in 2018, this title lives up to its name, awarding wrestlers that are most daring to take their bodies to the limits and matches to the extreme. The title has been held by multiple wrestlers, including GCW stalwarts SHLAK and Nick Gage. Currently, the Horror Slam Deathmatch title is held by Tommy Vendetta, “The Lovable Psychopath” hailing from Walled Lake, Minnesota. He won the title back in July and has defended it successfully ever since. Vendetta is a proven Horror Slam wrestler, being the company’s sole 3x Heavyweight Champion. Simply put, a victory over the champion doesn’t come easily. At Horror Slam vs GCW, however, he will have not one opponent to contend with, but instead, two.

The two wrestlers Vendetta must contend with are John Wayne Murdoch and Eric Ryan, both of whom have appeared for Horror Slam. Murdoch’s wrestling experience dates back to the early 2000s, having won the IWA World Championship on 6 occasions between 2015 and 2021. Throw in multiple King of the Deathmatches, having won said tournament in 2016, and it’s evident that “The Duke of Hardcore’s” reputation speaks for itself. Meanwhile, Eric Ryan serves as the GCW representative of this match. As a 44OH member to boot, one can assume that Ryan’s posse won’t be too far behind. Nonetheless, Ryan’s reputation as a deathmatch wrestler is solid in its own right. Keep in mind that he won this year’s King of the Deathmatch, as well as the year before, which makes him a dangerous competitor on his own. To say that Vendetta has a long night ahead of him would be an understatement. 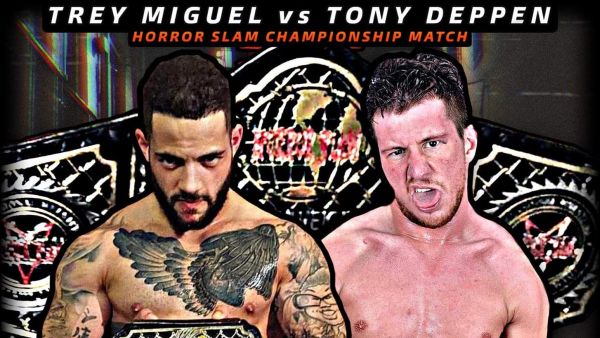 The other title that will be on the line is the Horror Slam Heavyweight Championship, the top prize in the Michigan-based promotion. This particular title came into existence in 2017 and has since been held by 11 competitors. The current champion, Trey Miguel, is a little over two months into this first Horror Slam Heavyweight title reign. He defeated Tommy Vendetta at this past June’s Day of the Undead event to win the title in question. Outside of Horror Slam, avid wrestling fans may know “The Fresh Prince of Mid-Air” from his current run in IMPACT Wrestling, where he is a fixture in the promotion’s X-Division. Though he has competed for the X-Division Championship on multiple occasions, Miguel has been able to captivate viewers with his high-flying offense. Will his breathtaking athleticism be enough for him to retain his title at Horror Slam vs GCW?

A stark contrast to the aerial approach of Miguel is the grounded, strike-based wrestling style of Tony Deppen. In addition to being a GCW favorite, Deppen has been enjoying success in Ring of Honor as well. He began regularly appearing for ROH in 2020, winning their World Television Championship this past spring. He also found allies in VLNCE UNLTD, a faction that includes Homicide, Brody King, and fellow GCW star Chris Dickinson. Before the title was rendered vacant, Deppen was among the 6 GCW Extreme Champions in said title’s short history. Deppen has gained universal praise among the independent wrestling community for being someone who could put on a good match with anyone. This should be no different when he challenges Miguel for the Horror Slam Heavyweight Championship this Wednesday. Will Deppen add another accolade to his ever-growing catalog of success?

Horror Slam vs GCW will take place in Detroit, Michigan on September 1, 2021.

Stay tuned to the Last Word on Pro Wrestling for more on this and other stories from around the world of wrestling, as they develop. You can always count on LWOPW to be on top of the major news in the wrestling world, as well as to provide you with analysis, previews, videos, interviews, and editorials on the wrestling world. Horror Slam vs GCW is set to air Wednesday at 8 PM EST on FITE.